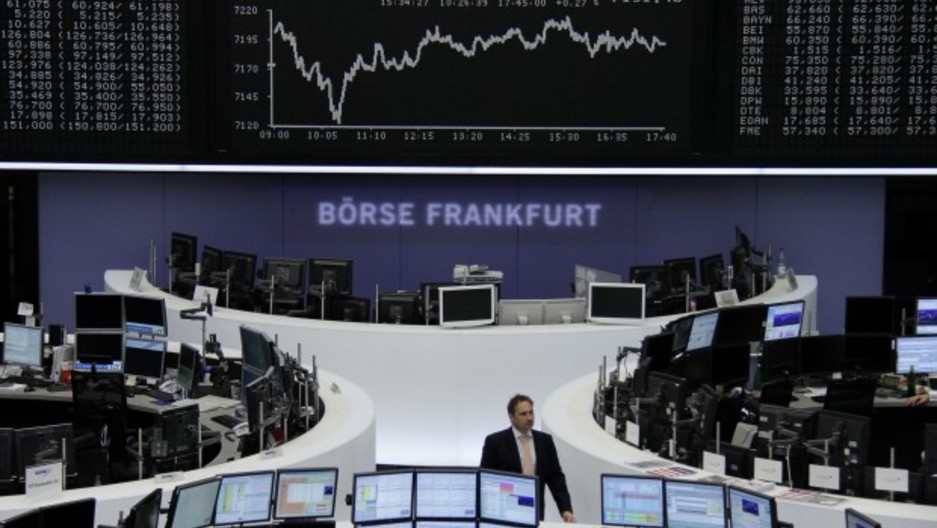 Traders are pictured at their desks in front of the DAX board at the Frankfurt stock exchange October 24, 2012. German business sentiment dropped sharply in October to its lowest in more than 2-1/2 years, the sixth consecutive fall dispelling any lingering doubt that Europe's largest economy is now mired in the euro zone debt crisis. The Munich-based Ifo think tank said on Wednesday its business climate index, based on a monthly survey of some 7,000 firms, fell to 100.0 in October from 101.4 in September. REUTERS/Remote/Lizza David (GERMANY - Tags: BUSINESS)

Share
Issue number one in this presidential election year: the economy. And there is worrying news on that front, from Europe. New official figures show that the combined total debt of all 17 nations using the euro currency has now risen to 90 percent of their gross domestic product. That means the euro debt crisis is far from over, and that's bad news for the US economy. Jacob Kirkegaard, a research fellow at the Peterson Institute for International Economics, says Europe's ailing economy impacts the American industry in many ways.