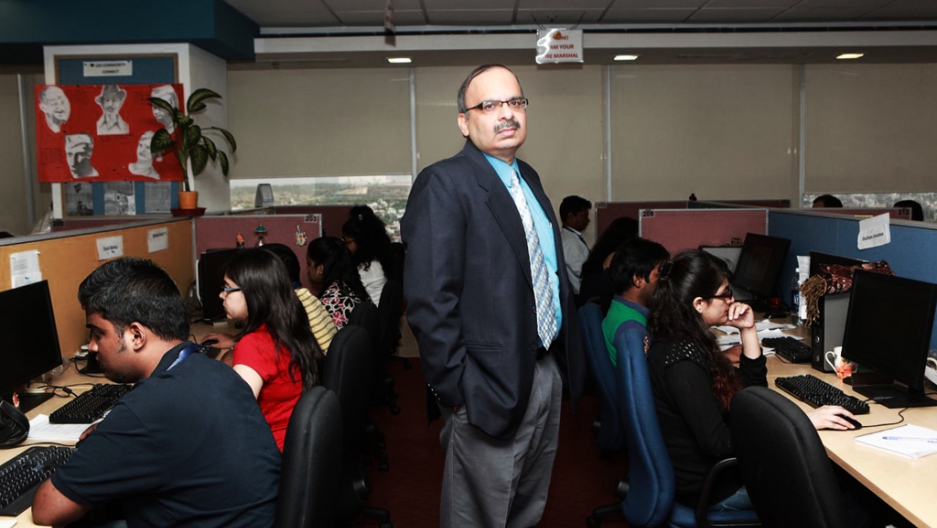 NEW DELHI, India — On the 15th floor of a gleaming new office building on the outskirts of New Delhi, around 100 professionals — fresh-faced enough to be college students — peer at flat-screen monitors and peck away at keyboards. The cluster of pink and blue cubicles might easily be confused for one of India's infamous call centers.

But the hushed, library silence hints there's something different going on here at the Indian outpost of Overland, Kansas-based UnitedLex. With revenue of $40 million and 750 employees, the company has emerged as one of America's fastest growing over the past three years, somewhat paradoxically, by outsourcing to India the work once done by American lawyers and paralegals.

“I'm 41, so I'm like the office elder,” said Vikram Masson, the transplanted US lawyer who runs the company's litigation support services division. Most of his team, which reviews hundreds of thousands of legal documents each month, is between 24 and 28 years old.

Welcome to the world of legal process outsourcing (LPO).

The LPO industry has had a profound effect on 34-year-old Nitin Jain, who works in UnitedLex's contract review division. Since joining from a firm where becoming partner would have taken at least a decade, he's climbed the ladder in less than half that time — and now leads a team of more than 20 associates. Along the way he's earned enough to help renovate the family home, which now has separate apartments for his parents and siblings. And he's started to spring for luxuries like vacations abroad.

“In day to day life, you don't have to think twice about things you want to own — a big LCD [TV], better furniture, all those things that affect you in day-to-day life,” Jain said.

LPO is the latest iteration of India's wildly successful offshoring industry. Demand for low-cost call centers and information technology services have spawned local multinationals such as Infosys and Wipro. “Business process outsourcing,” or BPO, created a new career path allowing millions of young Indians to enter the middle class, and to start fresh out of engineering school earning more than their fathers. This year, the Indian BPO business generated more than $100 billion in revenue. The industry employs nearly 3 million people — and has created some 300,000 US-based jobs over the past five years, according to India's National Association of Software and Services Companies (Nasscom).

LPO looks set to play an even greater role in the next wave — expanding the scope of India's legal profession to push more Indians into the rapidly growing middle class.

India's middle class grew from about 3 percent of the population in 1995 to nearly 13 percent, or around 160 million people, in 2010, according to India's National Council for Applied Economic Research. LPO could swell those numbers, and skew their earnings upward, as the current definition includes families that earn as little as $6000 to $30,000 a year.

Currently, the entire Indian LPO sector only employs some 50,000 people, according to Sanjay Kamlani, the co-CEO of New York-based Pangea3, another top firm. But there's room for massive expansion. India already has more than a million practicing lawyers, and its law schools add another 70,000 new graduates to the rolls every year. Moreover, the LPO sector increasingly promises bright new careers for lawyers who may otherwise struggle to move up the socio-economic ladder.

“The Indian court system is pretty tough. It's not easy to make it as a litigator. Compounding that is the fact that most firms have some sort of family relationship, so unless you have a background or family influence, it's very hard to make it as a litigator on your own,” said Masson. “That's one of the prime drivers of the attractiveness of LPOs, especially for women.”

Growing at 60 percent a year, according to industry insiders, the LPO business could also dramatically increase the market for Indian lawyers over the coming years.

“We're the largest LPO in India, and we have 1,000 employees. The largest BPOs have 30- to 40,000 employees,” said Kamlani. “We have a lot of room in the LPO industry to scale [up], and there's no problem adding double, triple, even going to ten times the current headcount.”

For 30-year-old Aby Mahajan, an associate at a small, New Delhi-based LPO called Trustman Legal Services, the payoff has already begun. A graduate of Jeeva University in Gwalior, Uttar Pradesh, Mahajan entered the profession with two strikes against him: He was a small town guy from Himachal Pradesh, without much swagger, in elitist and aggressive New Delhi, and he'd done his degree at a lesser law school. If he'd hung out his own shingle, he would have been scrambling for work with little hope of standing out from the horde.

And if he'd stuck with a senior lawyer or family-owned firm, he would have faced years of hard work, bad pay, and little recognition. As a recruitment advertisement on LegallyIndia.com suggests. “Fed up with uncle partner syndrome?” the ad reads. It advises lawyers to “Even the odds of the job hunt.”

“I worked earlier with some law firm, but my areas of interests changed, and I was not satisfied with my work,” Mahajan said. “Moneywise also, LPOs are giving better pay. The starting salary in LPO is better than joining a law firm. The growth opportunities are also more.”

Like most fresh lawyers, Mahajan was born into the middle class — his mother was a teacher and his father worked at a government-owned manufacturing company. Until he joined Trustman, he was living in what's known as a “PG,” or paying-guest accommodation, sharing a dormitory with 20 to 30 other young men. Now he has his own flat, and when it comes to clothing, says, “I'm only into brands now,” though he still takes public transportation to work.

New opportunities for young lawyers in India could spell trouble for lawyers and paralegals in the US, however. Currently, the Indian LPO sector as a whole employs fewer than 50,000 lawyers, but with the kind of growth envisioned by Pangea3 and other firms, it's hard to imagine America's legion of temp lawyers and paralegals will escape unscathed.

A vast increase in the offshore LPO business could make the already tough job market for US lawyers even tougher. After all, an Indian lawyer at one of the top LPO firms might earn an annual salary of $6,000 to $8,000, while US lawyers at temp staffing firms earn 10 times that amount. And, for the work law firms are the keenest to outsource, Indian lawyers say they do the work better.

“On an hour per hour basis it costs less. But there's a lot more going on than that,” said Pangea3's Kamlani.

“The associates at law firms don't like to do the work, and it's not their expertise, so they don’t achieve the same result that we do here in India,” Kamlani added. “We have 600 people for whom electronic discovery is their expertise and their business. They talk about it with enthusiasm and interest you won't get from a domestic associate.”

“One of my pitches to lawyers within the firm is that we can take some of the less interesting work off your plate,” Ford said. “We love the jobs you hate.”

Indeed, this is not the courtroom grandstanding you know from watching “The Good Wife,” though the work is just as essential to a firm's success. As much as two-thirds of the LPO business is in areas like “e-discovery” and “document review” — which means poring over literally hundreds of thousands of deeds, contracts, memoranda and spreadsheets to find a single line relevant to a multimillion dollar law suit.

“Sometimes it's a scientific or patent case where you have to read a little slower,” Masson said. “But typically they can go from 40-80 documents an hour, depending on the complexity. That translates to 650 documents a day.”

Like more traditional business process outsourcing (BPO), to improve efficiency LPO uses software tools — which, for example, can batch similar documents together to save the human reviewers time. And, increasingly, the “process” part is the most important piece of the puzzle, as companies apply the efficiency measures and analytical tools of BPO to reduce work, save time, and keep track of exactly where that's saving the client money.

“It's about using technology to perform the service more efficiently,” said Anup Bhasin, chief operating officer of UnitedLex in India. “If you were not using this intelligent batching technology, you would be reviewing each of these documents separately, which means time and cost to the client.”

Similarly, UnitedLex builds custom software to supplement off-the-shelf contract systems such as Upside, Selectica and Nextance, which help corporations that manage thousands of contracts to keep track automatically of expiration dates, milestones and other points when action needs to be taken.

“We build small systems that take care of the pain points of to our customers, which these big systems don't attend to,” Bhasin said.

That suggests two different LPO business models are emerging. On the one hand, there's the low-margin business of “bodies,” as industry experts often say about BPOs. This game is all about labor arbitrage: Making a buck by replacing a body in the US with a body in India, and taking a percentage off the top.

On the other hand, LPOs — which really only emerged five years ago — are steadily moving into higher-end services much faster than the BPO companies did. Now, along with grunt work like document review and basic due diligence, the top LPOs are consulting clients on automation and process efficiency, as well as reviewing contracts, drafting patent applications, processing loans, providing expert witness advice on data-collection, and conducting litigation-readiness assessment.

“In my group, the contract solutions vertical, the work is anything but basic,” said Joginder Yadav, who heads the contracts management division at UnitedLex. “I look at this as a postively disruptive model, [changing] the way legal services were traditionally delivered, or perceived as being delivered.”

In India, LPOs are helping to modernize a legal industry still dominated by family-owned firms where there is little opportunity for an outsider to make partner. They're giving fresh law graduates, many of whom would otherwise be serving as poorly paid apprentices to established lawyers, experience working with top international law firms and Fortune 500 clients. And they're pushing the best practices of the global legal industry deeper and wider into India's community of lawyers, through extensive training programs and one-on-one collaborations with experienced US and UK professionals.

“I worked with [an Indian] law firm for about four years before I joined UnitedLex in 2008,” said UnitedLex's Jain. “But my scope was limited to domestic clients. LPO provided me a background and an opportunity to do global work, and in the process learn about interacting [with foreign clients] and other legal practices.”

And, of course, there's the monthly “decorate your cubicle” contest, which doesn't happen at firms where the average age is higher than 30 years old.