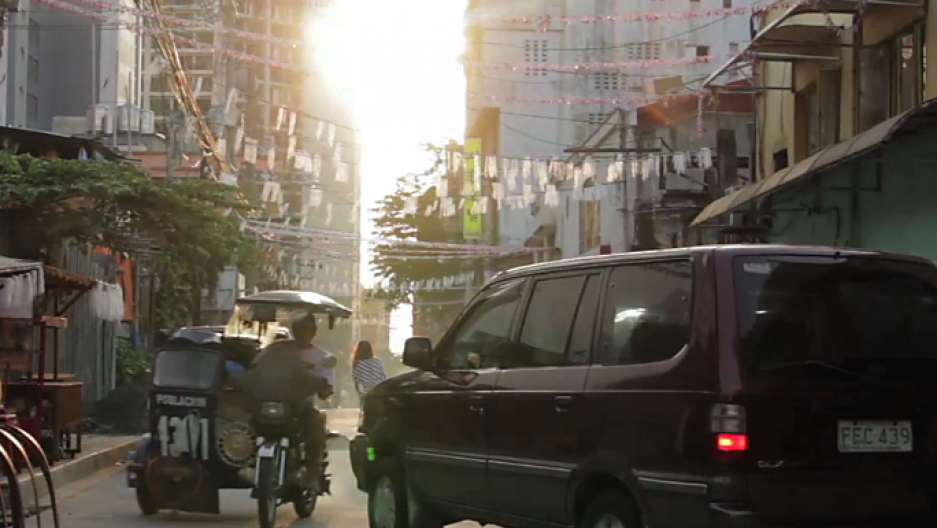 Manila benefited from the offshoring of garment jobs from the US. But that prosperity has not endured.
Credit: Michael Condon
Share

MANILA, Philippines — The collapse of US apparel manufacturing has been good to Fely Curameng, a Filipina peasant-turned-factory boss.

Through windows in her air-conditioned office, she looks out upon of an army of bent backs. A hive of workers on the factory floor hunch over automatic sewing machines. The staccato of needles firing thread into fabric reverberates off cement walls. Each day, incoming bales of cloth are cut and stitched into signature American brands: Dickies, Wrangler, Lee and more.

Curameng, now a coifed 57-year old, was once a poor seamstress. She owes her ascent from the factory floor to the office upstairs to qualities Americans hold dear: hustle, ingenuity and the guts to take risks. But she also owes it to the exodus of blue-collar garment factory jobs from America to foreign shores.

When garment factories fled the US in the mid-1990s, Curameng built them in the Philippines. “Those were my golden years,” she said.

Back then, American CEOs willing to relocate garment work were courted by Filipino politicians, who slashed fees and transformed old US military bases into modernized manufacturing zones. Curameng seized the moment and opened a string of factories churning out American brands on the cheap.

“I had four factories running, 1300 workers, all of them sewing clothes for Americans,” she said. She was so enamored with her success that she named her daughter “Epza,” a nod to the state-run “Export Processing Zone Authority” that enabled her mini-empire. “The Americans were paying so much. $2.50 per shirt. It was wonderful.”

But today, bosses like Curameng, who once thrived on supplanting American labor, have become the new victims of US outsourcing. She and others have learned that US outsourcers are fickle companions. Their wandering eyes have drifted away from the Philippines and towards even poorer Asian nations with super-low minimum wages.

In the late 1980s and 1990s, American garment stitchers making low wages ($6-$8 per hour) were undermined by Filipinos paid the same amount for an entire day’s work. These days, the Philippine garment trade is being devoured by Cambodia (minimum wage: $2 per day), Vietnam ($2-$3 per day) and Bangladesh, where some apparel factories pay a little more than $1 for a day’s work.

This race to the bottom has brought scenes from America’s manufacturing decline — shuttering factories, laying off sobbing employees — into Curameng’s life. It has whittled her workforce to just 500-odd people. “I’ve lost 75 million pesos ($1.7 million) in the last 10 years. I’ve lost almost everything I created to the banks. I’ve been feeling like a super dummy,” said Curameng, massaging the stress from her temples. “The American importers now ask us to make shirts for 85 cents now. How can I compete?”

Before the downfall of US garment factories, American stitchers making low wages could expect to drive a car to work, return to an air-conditioned home and, with enough financial discipline, send their children to a state university.

The Filipino workers who replaced them commute on creaky public jeeps, packed so tightly that passengers’ limbs dangle out the back hatch. They come home to hot, concrete hovels. They share squat toilets with neighbors. They hope to send their children to trade school, perhaps to learn welding or nursing.

Is it squalor? No. They call this lifestyle “middle class.”

Ten years of stitching for Timberland, Levi’s, Victoria’s Secret and others have provided her with a few cherished comforts. Cabaliw’s toes twinkle, from weekly pedicures. So does the knock-off Chanel necklace that hangs around her neck. Neighborhood girls do her laundry for $5 a week. She can now afford it: Curameng, her boss, recently promoted her from stitcher to supervisor. She now works six-to-seven days a week for about $380 per month.

Cabaliw, born to a steel worker and a stay-at-home seamstress, is the most successful of her siblings. Her accommodations are basic: a neatly-kept, two-room dwelling where baby geckos crawl the ceiling. She bathes by ladling herself with water in an outdoor cement stall, a canopy of spider webs overhead. Her rent is $60 a month. Power and water cost another $12. She is saving up to replace a refrigerator destroyed by August typhoons that flooded her home with chest-deep muck.

“Growing up,” she said, “I just wanted to marry a rich man, live in a big house and do nothing.” But when that adolescent fantasy faded, she said, sewing clothes for Americans was the opportunity that gave her security and independence. “I’ve never worried that I took some American’s job,” she said, laughing. “I wasn’t the one who took it anyway. It was their factory owners.”

The widely held belief in America that overseas factories extract dehumanizing toil from workers is amusing to stitchers like Romeo Pallorina, a 38-year-old father of three. “It’s strange to me that anyone would consider this to be a bad job,” said Romeo, who works alongside Cabaliw making clothes for Wrangler, Lee, the girly US brand Dollhouse and others. “We think of Americans as educated people who watch CNN. We assume they know better.”

The job itself is maddeningly repetitive. In assembly-line fashion, each employee at the factory performs the same task — sewing buttonholes, stitching collars — on 400-plus shirts each day.

But Pallorina, a 38-year-old high school dropout, is mindful of the men and women who loiter outside the factory gates with applications. “They would like to have my job,” he said, his tone turning serious. “But it is essential to my family and I will do anything to keep it.”

Locating countries fit to make cheap, US-branded clothing is a Goldilocks game. Well-off nations like America will no longer do: the costs of labor and benefits are simply too high. The poorest of the poor nations won’t do either. Their power grids short out and their governments are prone to dysfunction.

But if a country can offer dirt-cheap minimum wages and tax incentives, while keeping the lights on and the ports running, it can compete to stitch US brands. In this unprecedented era of Asian development, the number of eligible countries keeps growing.

America’s former battlefield foe, Vietnam, is now its second-largest apparel supplier to the tune of $7.2 billion per year. Indonesia, having stabilized after decades of strongman rule, is the third largest. US garment brands such as H&M and J.C. Penney have helped turn impoverished Bangladesh into America’s fifth-largest apparel supplier. Its minimum wage is among Asia’s lowest: a mere $10.75 per week.

At those prices, even China, America’s number one apparel provider, is sweating the competition. Why pay a Chinese laborer his weekly minimum wage, roughly $50-60, when a Bangladeshi will work the same shifts for a fraction of the price?

“The problem with profit is that it has no nationality,” said Ernesto Herrera, a long-time Philippine lawmaker and secretary general of the Trade Union Congress of the Philippines. “From the businessman’s standpoint, if he’s running a labor-intensive industry, he’ll always go for a country that provides the lower wage.”

Though the United States remains the top importer of clothes stitched by Filipinos, orders have dwindled and jobs have disappeared. Its current $1.2 billion in clothing exports to the US is now tripled by Cambodia, a tiny, deeply impoverished competitor. In the last five years alone, the Philippine garment industry’s workforce has shed 400,000 jobs and shriveled to just 180,000 workers.

The same Philippine government that once successfully lured US garment conglomerates is now tapping into America’s outsourcing anxiety. In a last-ditch effort to revive their apparel trade, Filipino politicians are proposing a new deal: send us shipments of American fabric, we’ll stitch it into clothing for you and we’ll both agree to waive duties and fees. The intent of this still-pending “Save Our Industries Act” is to revive the Philippine garment industry and America’s beleaguered textile trade in one go.

Among the bill’s supporters is boxing dynamo and Philippine congressman Manny Pacquiao, who tells factory workers in a televised public-service announcement that “the Philippine garments industry needs champions like you to revive this dying industry.”

“It’s a shame about these layoffs,” Herrera said. “These Filipino workers are skilled. They have dexterity in their fingers. The regular Filipino can speak English. And they’re conscious of sanitation. When they come home, they take a bath and brush their teeth. This may not be true in some other Asian countries.”

But none of these qualities are apt to sway factory bosses who know the cost of one Filipino worker pays for four workers in Vietnam. Herrera sees only one way out: producing high-quality clothing and selling more of it to rich and middle-class Filipinos with American tastes.

That is exactly what Curameng has started doing.

Wrangler’s ad campaigns in Asia, however, evoke indie cool. The waifish, fair-haired models in Wrangler’s regional “Find Your Edge” campaign are shown traipsing through fields while draped in American flags.

Wranglers, affordable and folksy in the US, are a pricey status symbol in the Philippines. “It’s very fashionable. You want people to see that brand name,” Cabaliw said. The cost of a pair of Wranglers in Manila, roughly $40, is equal to half her weekly pay. “They’re too expensive for me,” she said. “If my son walked in with a Wrangler shirt on, I’d say, ‘Hey, who bought that for you?’”

“We mostly sell American clothes on the local market now. Exports are no longer profitable,” Curameng said. She last shipped orders to the US in 2008, the year America’s economic plunge nearly bankrupted her entire operation. Like US workers before her, who resent the American outsourcers who cash in on outsourcing jobs, Curameng despises Filipinos who now fly abroad to train droves of newly hired Cambodian or Vietnamese sewing machine operators.

But Curameng’s daughter, Epza, is not so cynical.

Unlike her mother, who escaped farm life by sewing US military uniforms in the 1970s, Epza was born into relative affluence. Slight, pretty and fluent in English, she is the living embodiment of her family’s success.

Now 23, she attended university thanks to profits saved by her family during the roaring era of lucrative US contracts. So did her little brother, Bepz, his name inspired by the government-run “Bataan Export Processing Zone.” (Curameng once ran two factories in her native Bataan province, best known for a World War II-era death march during Japanese occupation).

“I’m not worried about the future,” said Epza, who holds down a management job at the family factory as well as a product development gig with Wrangler’s Philippines division. “Western brands will have a hold here forever.”

“Maybe my Mom is too idealistic,” said Epza, clad in a hoodie, T-shirt and jeans. “I mean, of course American companies are going other places. All these fashionable clothes, like you find at H&M, the owners are just looking for the lowest possible labor costs. That’s just how it works.”