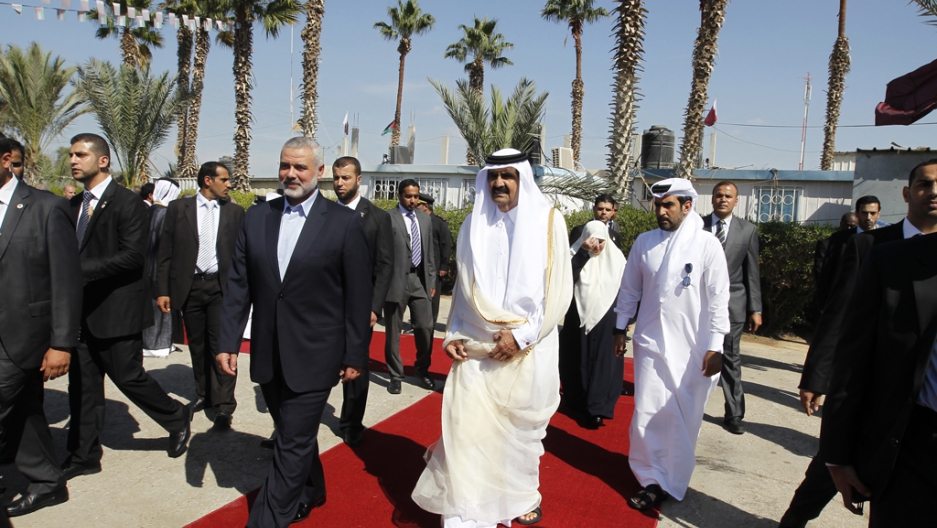 The emir of Qatar on Tuesday became the first head of state to visit Gaza since the Islamist militant group Hamas took control of the strip in 2007.

Sheik Hamad bin Khalifa Al Thani was given an enthusiastic welcome by Hamas during the landmark visit, which has given Hamas its biggest diplomatic victory since taking power, the Associated Press noted. Hamas has been diplomatically isolated, after being branded terrorists by the West and being subject to an Israeli blockade.

The emir was received by Gaza Prime Minister Ismail Haniyeh, of Hamas. "Gaza is not alone and Palestine occupies the hearts of Arabs," Haniyeh said, according to the AP. "Your visit today officially announces the break of the economic blockade and political blockade imposed on the Gaza Strip by the forces of injustice."

The emir pledged $400 million for construction in the strip, according to the BBC. Qatar has been one of Hamas' main benefactors since the group fell out with Syria and relations with Iran cooled.

More on GlobalPost: Syrian refugees in Lebanon number more than 100,000

Israel said it was "astounding" that Qatar, a small but influential US-allied Gulf state with rich reserves of oil and gas, would choose to endorse Hamas, Reuters reported. An Israeli spokesman said that the emir had "thrown peace under the bus."

The Palestinian Authority in the occupied West Bank was also not pleased by the emir's visit, saying it hoped the visit would not undermine efforts to rebuild Palestinian unity, according to Reuters.

The BBC noted that Qatar maintains cordial relations with both the US and Iran, and also with Hamas and Israel.