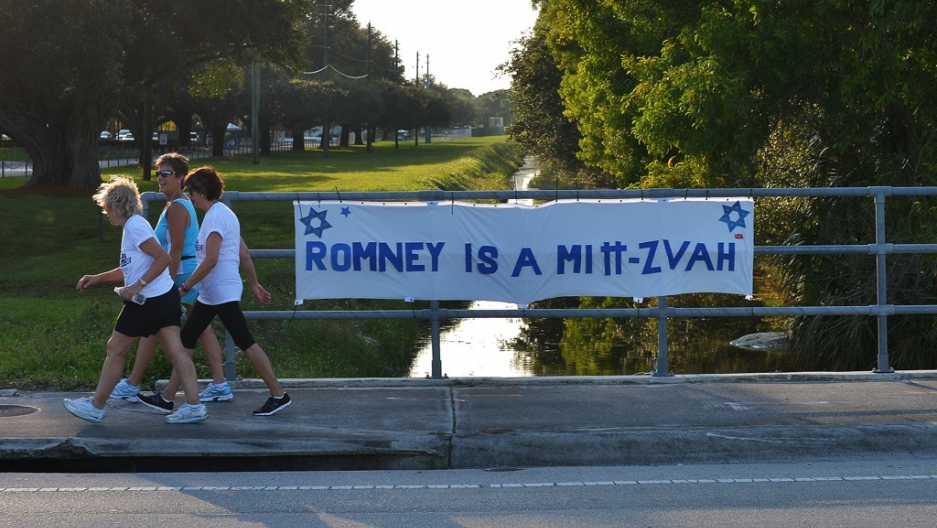 JERUSALEM — Israelis responded with delight and perhaps even a little vanity to their starring role in the final debate between President Obama and his Republican challenger, Mitt Romney.

For the duration of the day, pundits occupied themselves with parsing and re-parsing every line touching on matters Israeli, down to a débutante-like obsession with the number of times Israel was mentioned in the encounter (34, if you really want to know, whereas Syria only scored 28, Afghanistan ("where they have been at war for 10 years") garnering a mere 21 mentions).

Israel's eternal unenviable partner in these strange contests, the Palestinians, did not spend the day counting mentions. To the contrary, Palestinians lamented their only moment in the sunshine, when Mitt Romney somewhat lifelessly criticized Obama's failure to reanimate peace talks between Israel and Palestine.

"It was a sin of omission, and it was clearly the elephant in the room," Hanan Ashrawi, a former Palestinian minister told the Israeli website Ynet. "They are talking about peace, stability, democracy, freedom and human rights, and neither touched the Palestinian question — which is the main issue in the region — that's the key to peace and embodies the need for human rights and role of law and justice."

Meanwhile, Israelis spent hours dissecting the possible differences between the virtually identical statements made by Obama and Romney that each "will stand with Israel" in the event of an Iranian attack.

A live blog on the Ha'aretz website commented that moderator Bob Schieffer appeared himself to be "very warlike." Yes, amid early morning traffic and weather reports (the bone-dry desert around Mount Sodom suffered a rare and violent cloudburst last night) Israelis live-blogged the debate.

What effect will the debate have on "Jewish undecideds"? a former Consul General in New York, Alon Pinkas, was asked on Israel Radio. "Very little," he deadpanned. "There may not even be 1 percent of those. I think this debate will have, in general, very little effect."

But the importance granted to the debate, and the precarious nature of politics right now, less than three months before elections in Israel, could easily be perceived in much of the surrounding commentary.

In what appears to be a planned, pre-debate volley, the former head of the Mossad, Israel's intelligence agency, Ephraim Halevy, granted an unusual interview. Hhe praised Obama's efforts against Iranian nuclear development as "brave" and referred to the crippling sanctions Obama has instituted as "a success." In stark contrast, and in defiance of what many Israelis perceive to be Prime Minister Benjamin Netanyahu's all-but-endorsement of Romney, Halevy said that Romney's approach would practically shut down any possibility of a resolution to the standoff with Iran without war.

In the interview, which came out hours before the debate, Halevy said: "Negotiating with Iran is perceived as a sign of beginning to forsake Israel. That is where I think the basic difference is between Romney and Obama. What Romney is doing is mortally destroying any chance of a resolution without war."

"In the end, this is what I think: Making foreign policy on Iran a serious issue in the US elections — what Romney has done, in itself — is a heavy blow to the ultimate interests of the United States and Israel."

Radio talk shows summed up the day's event with a new, punning line, playing on the Hebrew meaning of the word "Barack," which means sparkle or shine. “Ha barak chozer le Obama,” announced a radio host, meaning, “Barack (the shine) returns to Obama,” followed by a jazzy rendition of the star spangled banner.

All the attention given to the American debate may have paid off in another, unexpected way. Israel's elections are notoriously free-wheeling and brawlish. But, inspired by the American example, an independent group called the Citizen's Empowerment Center has invited each of the Israeli candidates to a debate to be held at Tel Aviv University on Jan. 1, 2013, three weeks before Election Day.

According to the center, by early evening all of the candidates with the exception of the prime minister confirmed their attendance. Foreign Minister Avigdor Lieberman, head of a right-wing coalition member, confirmed his attendance "if all other major party heads attend."