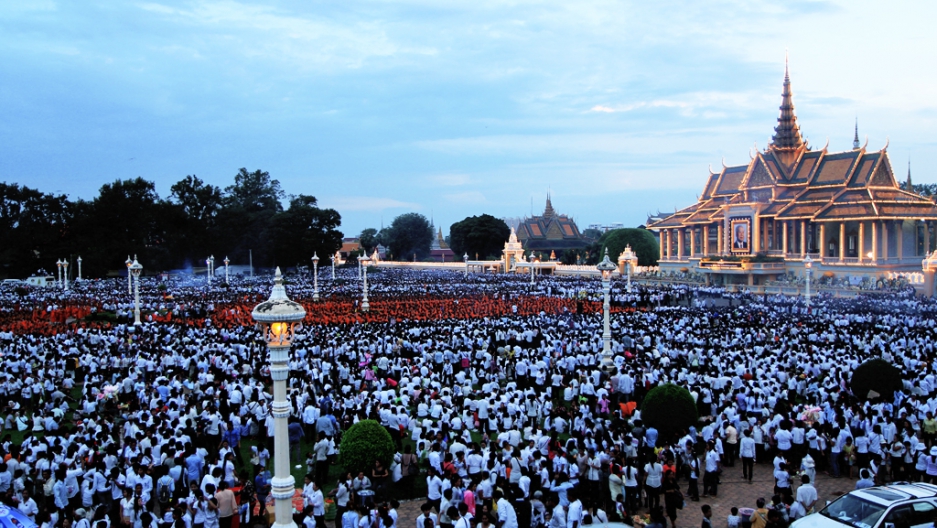 PHNOM PENH — Cambodian mourners gathered at the Royal Palace in Phnom Penh by the thousands on Tuesday night, marking the final day of the official mourning period for deceased King Norodom Sihanouk, who passed away last week at the age of 89.

Scores of Buddhist monks arrived at the Royal Palace Tuesday afternoon, where they performed a mass meditation to honor the memory of Sihanouk. They arranged themselves in a vermillion triangle outside the Palace, and their chants mingled together with impressive force.

The Cambodian people remain in something of a state of shock regarding the death of the immensely popular former King, and thousands have streamed into the capital city from throughout the country for the occasion. They have gathered around the Royal Palace, some camping outside of it or in the parks nearby. The passing of the King has become a major social occasion.

On Wednesday evening, the streets were jam-packed with people heading to the palace to venerate the King, some in groups from school or work, shoving through the crowds shoulder-to-shoulder. As the sun went down, the mourners settled into groups and began lighting sticks of incense, small pinpricks of light in a sea of humanity.

Snack and souvenir sellers roamed the crowds, peddling popcorn, black and white mourning ribbons, and cellophane-wrapped souvenir photographs of the King, both in his younger days and lying regally in state inside the Palace itself.

Sharp-eyed mourners remained on the look-out for posthumous portents of Sihanouk, who has been credited with near-supernatural powers by some.

The Internet is abuzz with rumors that the fallen God-king is now looking down at his subjects from the moon, and on Wednesday, many were craning their necks up at the sky in an effort to catch a glimpse of the supposed phenomenon for themselves.

Even incense smoke was catering to the King's whims, some believed: a curl of perfumed smoke rose up into the air from the endless little altars that were lit for Sihanouk, and arranged itself for a minute or two into the shape of a face in the early evening near the river — hundreds of passers-by stopped in their tracks, exclaiming out loud.

An elderly woman collapsed on the sidewalk near the Royal Palace, overwhelmed by the sweltering heat and the press of the crowds. She panted as her family members aggressively fanned her forehead. Ambulances waited at the ready to address more dire cases of exhaustion.

It threatened to rain as darkness fell over the gathering on Wednesday, but Sihanouk's most die-hard supporters were unfazed — supporters like 40-year-old Mai Vuthy, a candy seller from the beach town of Sihanoukville.

He had raced from the coast to Phnom Penh as soon as he had heard the news with a group of people from his community. Those who could not afford to come donated food and drink to the expedition, in the name of incurring good karma, Vuthy said.

"It doesn't matter how tired we are, if it's rainy or sunny or stormy," he said, sitting on the grass in a park nearby the Palace. "We never get tired of staying here. We are happy to stay here."

Although he did not live through them himself, Vuthy said he'd been told the 1960s and 1950s were a golden era, when Cambodia had car and tire factories, and was not forced to import such materials; sterling economic achievements Vuthy attributed to Sihanouk's strong leadership.

Vuthy nonchalantly agreed that the King had manifested himself in the moon — and added that he felt the King had intentionally shaded the sky to keep his people cool when his body was returned to Cambodia from Beijing, where he died, last week.

"Everyone here was sobbing, crying and chanting when they saw the King in the moon," he said. "It's an incredible power that remains — even if he passes away, he will always be in our memory and our heart."

How much longer would Vuthy stay? He had heard a rumor that the general public would finally be allowed inside the palace to view the King's body on Wednesday. He would remain here in the park another day, just in case.

Sixty-seven-year-old Soung Hean expressed her own sorrow over the loss of Sihanouk, as she sat with her family behind a flickering phalanx of incense sticks.

Her sister had died on the same day as Sihanouk, said Hean, and she had only been able to come to Phnom Penh to venerate the king the day after.

"I think he is a person with incredible power," she remarked of the King's supposed manifestation in the moon. "Even if he has passed away, his love for the nation and the people will never vanish," she added, noting that the King was the "seventh most intellectual person in the world," and extremely popular with foreign leaders.

She fondly recalled Sihanouk's fight to regain the contested temple at Preah Vihear from the Thais in the 1960s, when she was in high school; a time when, as Vuthy said, there were car factories in the capital, and the Khmer people felt nothing if not hopeful.

She is not alone: the death of the King has summoned up nostalgic feelings in many Cambodians, especially those who belong to the generation that remembers the post-independence, pre-Khmer Rouge boom times.

"Let me compare this to a family," said 73-year-old Ien Sunnary, speaking of Cambodia's collective reaction to the King's death on Tuesday evening.

"When the family loses the middle column of their house, it becomes very difficult for it to stand. Like a family, it will be difficult for them to move forward — they can do it, but they will be struggling."