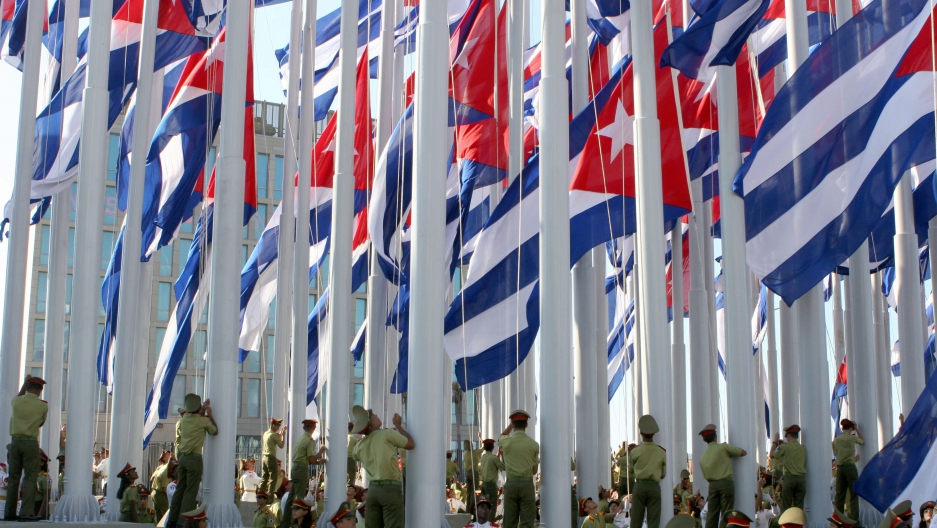 Another red, white and blue: Cuban soldiers hoist Cuban flags in front of the US Interests Office in Havana.
Credit: Adalberto Roque
Share

HAVANA, Cuba — Foreign policy will be the focus of the final US presidential debate on Oct. 22, and since the event will be held in Boca Raton, Fla., the candidates could face questions on Cuba.

Neither President Obama nor GOP nominee Mitt Romney is offering any major new policy prescriptions for the common goal of ending Castro rule on the island. Rather, their Cuba plans stick close to party orthodoxy: Republicans want to bring change by squeezing the communist government; Democrats say engagement works better than isolation.

Romney’s 10-point Cuba plan would essentially revert US policy to the George W. Bush era, rolling back Obama administration measures that have eased restrictions on travel and cash remittances sent by Cubans in the US to their relatives on the island.

“No accommodation, no appeasement,” is the Romney tagline on Cuba.

Less clear is what President Obama might do in a second term, when he will no longer be bound by the demands of electoral politics in Florida, where anti-Castro stridency remains a powerful force.

More from GlobalPost: What if Cuba could vote in the US election?

Obama came to office saying he would sit down for tough negotiations with Cuba’s leaders, but his administration has shown little interest in pushing past the long US stalemate with the island, according to advocates of Cuba policy reform.

“The president has not made Cuba policy a priority except for overdue, incremental reforms,” said Sarah Stephens, whose Washington, DC-based Center for Democracy in the Americas urges rapprochement with Cuba.

“With his leadership and attention, a lot could change, but I hope that his priority is on diplomacy and engaging the Cuban government rather than making small reforms with the hope of eliciting a reaction,” she said. “That's the road to progress.”

The United States has drawn escalating criticism in Latin America over its 52-year-old Cuba embargo, even from key allies in the region like Colombia.

But only Congress — not the president — has the power to lift the embargo against Cuba, which are the world’s longest-running unilateral trade sanctions. Still, other elements of US policy can be tweaked by executive order.

One would further liberalize American travel to the island. Under the Bush administration, Cuban Americans were limited to one trip every three years. Obama has lifted those restrictions, arguing that unfettered travel by Cuban Americans maximizes Cubans’ exposure to the democratic values of their US relatives.

More from GlobalPost: Cubans will be allowed to leave the island without an exit permit

Obama has also made it easier for US tour groups to visit the island under the guise of “people-to-people” contact, though such programs have been sharply curtailed this year following complaints by Cuban American lawmakers that the tours had too much dancing and other recreational activities.

Cuba watchers say another move Obama could make would be to remove the island from the black list of “state sponsors of terror,” a designation that irks Havana.

The US has long justified Cuba’s inclusion on the list by pointing to the presence of Colombian insurgents on the island from the FARC rebel group. But Cuba is now facilitating peace talks between the Colombian government and FARC commanders.

If the Castro government can help bring an end to the 50-year-old conflict, it may be difficult for the US to insist Cuba is sponsoring terrorism.

A much bigger sticking point is the fate of Alan Gross, the US subcontractor serving a 15-year prison term in a Cuban military hospital. Gross was arrested on the island in 2009 in possession of sophisticated electronics equipment while working for a USAID democracy-building program. US officials and Gross’ attorneys insist he was only trying to help Cuban Jewish groups connect to the internet.

US lawmakers from both parties have warned the Castro government that no progress can be made until Gross, 63, is released.

Cuba, for its part, has repeatedly signaled it wants to bargain Gross in exchange for leniency toward the “Cuban Five,” a group of intelligence agents serving long sentences in US federal prisons.

Writing in the Wall Street Journal last month, pro-embargo advocate Mauricio Claver-Carone likened Gross to a “hostage” and argued that the best way to free him would be to reverse Obama’s narrow opening toward Cuba.

“The prospect of the US rolling back non-humanitarian travel and transactions to the island would get Havana's attention,” Claver-Carone wrote. “One thing is abundantly clear: Alan Gross needs stronger, tougher support than rhetorical demands that he be ‘immediately released.’”

Cuban President Raul Castro has said repeatedly that he’s willing to sit down for talks with Obama on “any issue,” but that the island’s “sovereignty” isn’t up for negotiation.

That isn’t the type of proposal the Obama administration is likely take up in an election year. But in a second term? It’s possible.

“I don't see major changes in the relationship because the US side says Gross' release is a precondition, and the two sides are talking past each other when it comes to that case,” said Cuban expert Phil Peters of the Virginia-based Lexington Institute.

“Granted, an election and a new secretary of state could shuffle the deck,” Peters said.

With Hillary Clinton planning to step down as secretary of state, there has been some speculation that Sen. John Kerry (D-Massachusetts) could replace her.

Kerry has long been an advocate of greater engagement with the Cuban government, and has often criticized the effectiveness US democracy-building programs like the one Gross was working for.