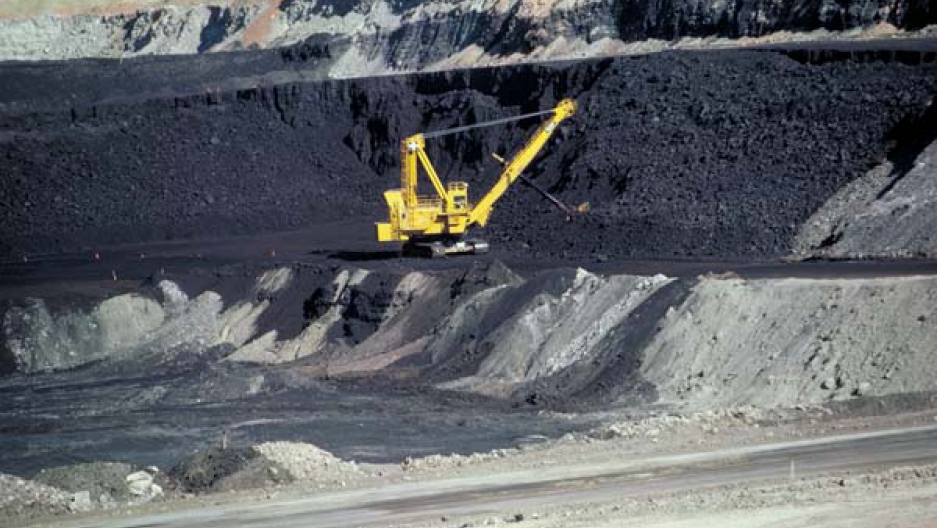 Coal mines, like this one in Wyoming, are important to the economic development of the state — but also cause environmental consequences. (Photo courtesy of the U.S. Bureau of Land Management.)

Editor's Note:This story is part of a series from public media's EarthFix project. Get more stories on coal in the northwest.

At least five deep water ports in the Pacific Northwest are being considered as terminals to export coal from Wyoming and Montana — largely to the booming economies of Asia.

But to get to those ports, it would need to travel by train — and that has governmental agencies, environmental groups, Native Americans, labor and industry in an increasingly fierce debate.

The U.S. produces about a billion tons of coal every year, almost half of it mined in the Powder River Basin, in northeast Wyoming. The Black Thunder Coal mine in Gillette, Wyo., is one of the largest mines in the world. The first thing that hits you is the sheer size of the operation. Dump trucks as big as California bungalows rumble back and forth — clearing away millions of pounds of clay and dirt to get at the rich coal seam underneath. It’s like peering into an ant colony under siege.

"It’s the big one, it’s the queen bee. It’s the big machine," said Keith Williams, who runs the mine, as he shows off the piece of equipment that digs the coal out of the ground — a machine called a dragline.

It looks like a crane attached to an apartment building, swiveling back and forth, with a giant bucket suspended from one end to scoop earth.

Tom Lubnau is a state representative from this part of Wyoming, says these mining operations are critical sources of jobs in the area.

"They’re a great corporate citizen. They contribute well to our communities. In terms of a lot of things. The coal industry statewide has built a billion dollars worth of schools," he pointed out.

The coal industry employs 5,000 people in the mines of Campbell County — the center of mining operations in the Powder River Coal deposit. The average income here is $60,000 a year.

Overwhelmingly, people here are proud of the coal industry. It is one of the key economic forces that transformed Gillette from a cow town along the rail line into a mini-metropolis.

But not everyone's so sanguine.

LJ Turner and his wife, Karen, own a 10,000 acre ranch that's been in his family  since 1918. He raises cows and sheep on the sprawling property. There's a creek that runs through the property, at least it used to.

Now, what used to be a creek full enough to provide blocks of ice for household use is barely a muddy trickle.

Turner blames the mining companies for emptying the underground aquifers that used to fill the creek — plus the well that supplies water to his home. He's dug the well 100 feet below his house, and yet it still runs dry. Turner’s also upset that some of the nearby grazing land he used to lease from the Forest Service has now been leased to the coal companies to be mined.

"The first winter that Dad was here in 1919, he said it never got above 20 below for 6 weeks. But this last winter it froze up, but it didn’t freeze hard. We had green grass in February," he said.

He blames that on climate change, caused by burning fossil fuels.

U.S. coal consumption is at a 40-year low, largely because of a boom in cheap natural gas. But international demand for coal is expected to rise 65 percent in the next 20 years — largely in Asia.

That has coal companies looking for ways to get their product across the Pacific as quickly and cheaply as possible.