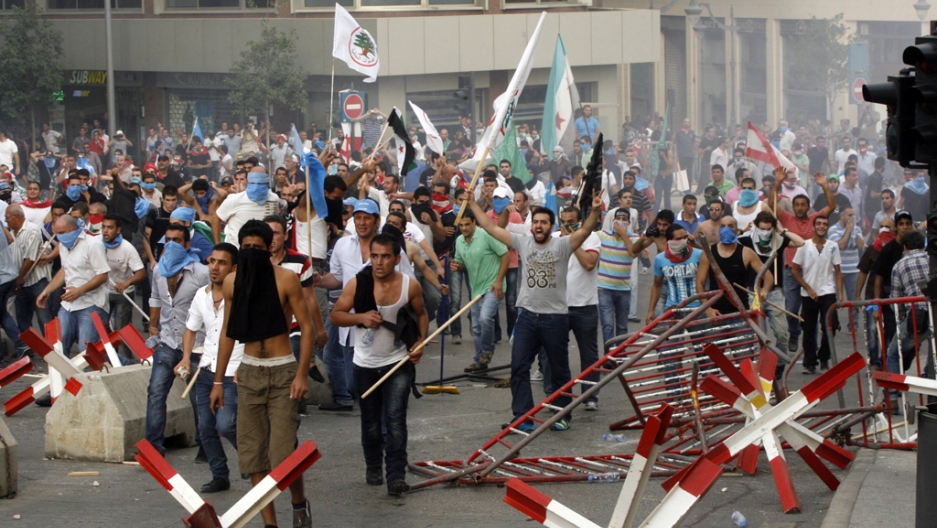 Supporters of the March 14 movement, which opposes the Syrian regime of President Bashar al-Assad, storm the governmental palace in Beirut after the funeral of top intelligence chief General Wissam al-Hassan and his bodyguard, in downtown Beirut, on October 21, 2012.
Credit: -
Share

Al-Hassan was on his way to meet with Lebanese lawmaker Amar Houri to discuss a threatening text message sent from a Syrian phone number when he was killed by a car bomb in Beirut, CNN reported. Parliamentarian Ahmad Fatfat said similar threats were sent via text to three other lawmakers, including himself.

All four lawmakers who received threats were members of Lebanon's Future Movement, the largest segment of the anti-Syrian March 14 coalition led by Saad Hariri, said CNN. Fatfat said another text was sent from a similar phone number after al-Hassan's assassination, with the message: "Congratulations, the countdown has started. One of ten."

The New York Times noted that al-Hassan was a complicated and polarizing figure in Lebanese politics, an ally of former Prime Minister Saad Hariri who was deeply distrusted by some of Hariri's allies.

His intelligence branch uncovered the network responsible for monitoring Rafik Hariri (Saad Hariri's father and former prime minister of Lebanon), eventually leading to four people connected to Hezbollah being indicted, said The Times. At the same time, he acted as an intermediary between Saad Hariri and Hezbollah.

The funeral held for al-Hassan on Sunday turned violent when protesters called for the resignation of the government, amid teargas, rock throwing and bursts of gunfire from security forces, the Guardian noted.

Opposition politicians directly accused Syria of being responsible for al-Hassan's assassination. Lebanon's prime minister, Najib Mikati, tendered his resignation to the president on Saturday, while agreeing to remain in office while a national unity government was formed.

CNN noted that while Syria condemned the attack which killed al-Hassan, that hadn't stopped the accusations that it was behind the bombing.