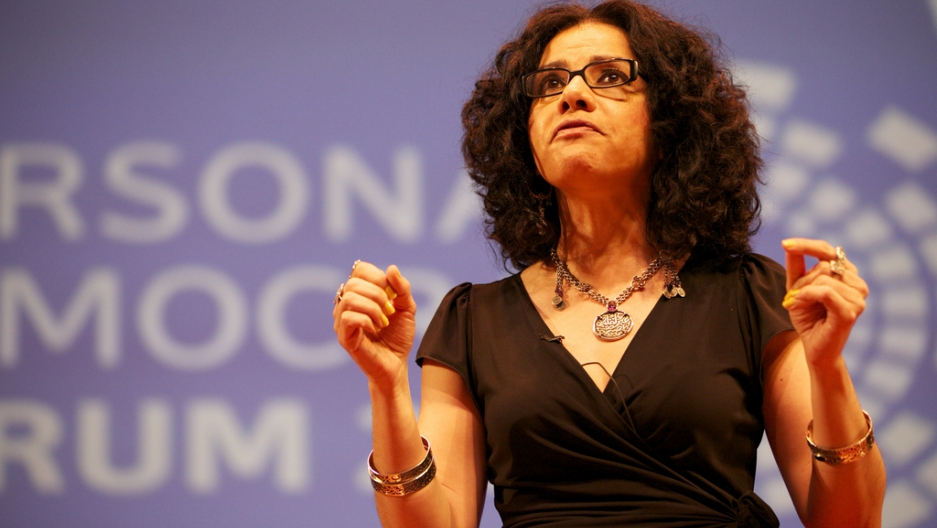 Mona Eltahawy gives a speech in 2011. The internationally known writer was recently arrested for spray painting an ad in the New York City subway as a form on non-violent protest.
Credit: Personal Democracy Forum on Flickr
Share

Anti-Muslim hate speech has become a preeminent issue for Mona Eltahawy, an outspoken Egyptian-American writer and activist, as she attempts to get to the crux of the culture war between right-wing Americans and Muslims by putting herself in the middle of it.

No stranger to writing uncomfortable truths in an easily digestible way or joining a protest, Eltahawy took her expressive nature off the page again last month when she insisted a New York subway advertisement was racist and spray painted over it. She says felt the ad was part of a culture of "bullying" of Muslims and that it was "hate speech," and she needed to take a non-violent stand against it.

The ad, paid for by far-right, anti-Islam group the American Freedom Defense Initiative (the same group that has led protests against the community center blocks from Ground Zero), was ruled protected speech by a federal judge in late September. Posters reading "In any war between the civilized man and the savage, support the civilized man. Support Israel. Defeat Jihad," were hung inside 10 Manhattan subway stations, prompting the action by Eltahawy that resulted in her arrest.

The same posters can now be seen in DC, and Eltahawy hasn't been the only one to protest them – a coalition of Jewish and Christian groups have countered with ads of their own.

In an interview with GlobalPost, Eltahawy went further into detail about the story of spray painting the ads, her fight against anti-Muslim bullying in America, and why we shouldn't refer to her as a journalist. I spoke to Eltahawy by phone about these issues after her arrest and days after her brother's mosque in Ohio was burned down, another in a string of hate crimes against Muslims that Eltahawy says is on the rise in the US.

This interview has been edited for length.

Alex Pearlman: Why did you spray paint the poster? You've said it in 140 characters on Twitter, but can you tell me specifically what moved you to take this action in this way?

Mona Eltahawy: I think I've reached this wall with Twitter. I knew they were going to put those posters up around the city, I had read about it two or three days before they went up. And then I saw this campaign happening on Twitter, #mysubwayad, in which people were suggesting different wording for if they had a subway ad up to counter this particular ad. And as much as I love Twitter – and I live Twitter – I realized I'm following the hashtag for #mysubwayad, but there's a limit when we choose Twitter. And until we take it out into the real world, it's nonsense.

So I thought, this is just racist, I can't stand this ad, and another part of it is, I defended the Danish cartoons. I'm a huge fan of freedom of speech and the First Amendment and all of that, but these ads offended me. The cartoons of the prophet didn't offend me, and the people you always see going out and protesting all of these supposedly offensive things to Muslims, they don't represent me at all.

I'm a big believer that these [American] right wing lunatics need to see Muslims saying "Fuck you, I'm not going to be bullied anymore." This is where my anger for my protest came from. I just want them to know that you can't bully us anymore and I went out and did it.

I think everyone should protest in the way they best see fit and that best reflects their principles and conscience. For me, it was a spray can and I wanted to spray "racist" on it, but I don't do graffiti, so clearly I failed with that… And I realized that all I could do was just spray on it. And I intentionally chose pink because it was see-through and it was nonviolent. I did not want to cover up the words. I wanted my words near their words.

AP: Speaking of an increase in hate crimes, besides the posters, you said to me that your brother's mosque was burned down. What happened?

ME: Five days after my spray painting and my arrest, on Sunday Sept. 30, a man set fire to my brother's local mosque. It was just a few hours after the kindergarten in that mosque was filled with kids for Sunday school, including my two nieces and my two nephews. I heard this news, and I just went… I just got unraveled. I really lost it. I thought my protest had backfired, because I protested and then this happened. But they're not connected, thank God.

AP: I'd like to shift from this country to Israel, the focus of the ad, where you used to be a reporter. Is there a similar trend toward anti-Muslim hate speech and hate crimes in that country? Is Islamophobia also on a significant rise there?

ME: Oh yeah! There have been several incidents over the past few months of buses being attacked, and I think a mosque was attacked there as well. To be honest, I've been really covering Egypt and traveling back and forth and I haven't been focused as much on the Israel/Palestine story. But I do see from people on Twitter that there have been attacks on Palestinians. The other terrible thing about this ad is that it [uses] the word "savage" and the horrible history in this country of the word "savage."

Ask native americans, ask black Americans just what that word "savage" has been used to justify against them. So you've got the word "savage" and it conflates Arabs and Muslims and Palestinians with "savage" and we're all on one side of people associated with "jihad." And obviously this is not about jihad.

A lot of people are saying, "you should be speaking out about jihad." If you know my work, you know that I have been. I've condemned extremist religion for years. But this isn't what this ad is about. It's conflates Arab, Muslim, Palestinian, jihad, savage, on one side, and on the other side – Israel. So Israel is the good one.

My question to the people who made this ad is, can you imagine if the language had been flipped and it said, "Support jihad. Defeat Israel?" Would this have been an ad on the walls of the New York subway?

AP: How did you transition from being a reporter and journalist, which you've been for years, to suddenly being an activist who is not reporting, but opining on your feelings and what you think on any number of topics? You write about feminism, progressive Islam, the US, and the Arab world, and you were in Tahrir Square as a reporter and an activist. Now you say you don't see yourself as a journalist. How did this change happen and why?

ME: It started right after 9/11. Before that, I was a news reporter for 10 years, mostly in the Middle East. What 9/11 did was it killed objectivity. I started writing opinion pieces because I didn't see my voice in the US mainstream media. I would turn on television or read the opinion pages and I didn't see anyone who sounded or looked like me. It was usually people who were much more conservative or presented as "authentic Muslims." And that was the thing, that conservative equaled authentic. And I wanted my voice to go in there and complicate and confuse and add to the diversity of voices. And I started writing opinion pieces.

Since then on, I have not done news reporting and I choose not to call myself a journalist. People often do call me a journalist and the reason I don't call myself a journalist is that when I then join protests, as I do in Egypt, or as I spray painted that ad, people use this against the profession and say, "Is this what journalists do? They try to kill the First Amendment?" And so I have nothing to do with journalism, they have nothing to do with me, I'm an opinion writer – and I very much want to tell you my opinion, whether it's when I spray paint an offensive ad, or I'm demonstrating against the regime or the military or the Muslim Brotherhood.

Eltahawy is next headed back to Egypt to write a book to follow up on her noteworthy Foreign Policy article "Why they hate us," with a focus on feminism and sexual violence in Egypt during and after the revolution.

For more of GlobalPost's coverage of radical woman in the Arab world, check out our Special Report "The Voice and The Veil: Egypt's Revolutionary Women," which Eltahawy is profiled in.