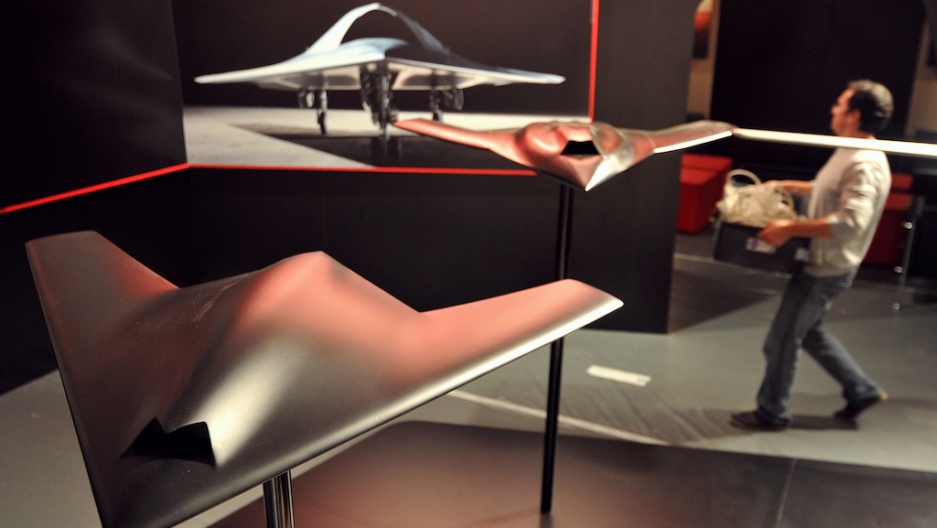 A man is at work during the set up of the 'UAV Show Europe', an International Drone fair, on September 25, 2012 in Merignac near Bordeaux, on the eve of the event's start.
Credit: Pierre Andrieu
Share

At Monday's final presidential debate, both candidates sought to position themselves as sentinels of national security.

While they may disagree on which national security issue is most pressing, on the question of how to counter terrorism, Romney and Obama appear poised to make very similar decisions. It's worth remembering that Obama continued, and in some cases expanded, the hard-line policies of his predecessor, George W. Bush, who initiated the so-called "war on terror."

How Romney and Obama challenge each other in this area is more of an image issue — who looks tougher on terrorism — than a substantive question of policy. But that doesn't mean voters shouldn't question the direction of counterterrorism measures since 9/11, efforts that have of course been inextricably tied to the wars in Iraq and Afghanistan.

A few of the most contentious issues to arise from changes to counterterror tactics include the use of drones, failure to close the Guantanamo Bay detention facility, and increased surveillance of US citizens.

On Monday, Romney enthusiastically agreed with the president's use of drones to kill terror suspects. "It’s widely reported that drones are being used in drone strikes, and I support that entirely and feel the president was right to up the usage of that technology and believe that we should continue to use it to continue to go after the people who represent a threat to this nation and to our friends," he said.

The use of unmanned aerial vehicles, or drones, to strike suspected terrorist targets has been a hallmark of the Obama adminstration's counterterror policy. The New York Times wrote in May of this year: "Nothing else in Mr. Obama’s first term has baffled liberal supporters and confounded conservative critics alike as his aggressive counterterrorism record."

When the Washington Post's Erik Wemple asked the Romney campaign to explain the candidate's position on drones, he was directed to a vague statement Romney made to the New York Times in 2011 that suggested his support of a drone program:

"As president, my top priority would be to protect the American people from all of our nation’s terrorist enemies, whatever their citizenship or country of origin. My preference would be to capture, interrogate, and prosecute any U.S. citizen who has engaged in acts of war against the United States. But if necessary to defend the country, I would be willing to authorize the use of lethal force."

In 2007 comments during a Republican debate, Romney emphasized his belief in "prevention" to counter terror, which is in line with the methods used by Obama and Bush.

"I will not do things that interfere with the rights of our citizens and their freedoms,” Romney said on Oct. 10, according to the Washington Times. “At the same time, I support efforts like the Patriot Act and others to secure our nation from those who would attack us.”

That presumably means that Romney supports amendments to the Foreign Intelligence Surveillance Act that the Patriot Act enabled; amendments that have opened American citizens to increased surveillance, including wiretapping.

Questions of domestic spying didn't figure into the debate Monday night — indeed, it's been a little-discussed topic in recent years.

The area where Romney and Obama appear to disagree is on the question of whether to close Guantanamo, though that too wasn't raised during the debate.

The Miami Herald noted that Guantanamo has been conspicuosly absent from the 2012 campaign. The Obama camp has vowed that it still wants to make good on a long-overdue promise to close the facility.

“The president has made clear that the policy of this administration is to do what is clearly in our national security interest — to close the detention facility at Guantánamo,” said Tommy Vietor, White House national security spokesman, this month.

In 2007, during the same debate noted above, Romney defended the existence of the controversial detention facility at Guantanamo Bay, saying, "Some people have said we ought to close Guantanamo. My view is, we ought to double Guantanamo," a comment met with strong applause.

More from GlobalPost: To close Guantanamo, stability needed in Yemen

While it affirmed its position to keep the Guantanamo facility open, "The Romney campaign won’t elaborate on what the Massachusetts governor wanted to double that day," the Herald wrote.

Listen to Romney's 2007 defense of Guantanamo and enhanced interrogation:

Obama reaffirms his intention to close Guantanamo to CBS, in 2008: