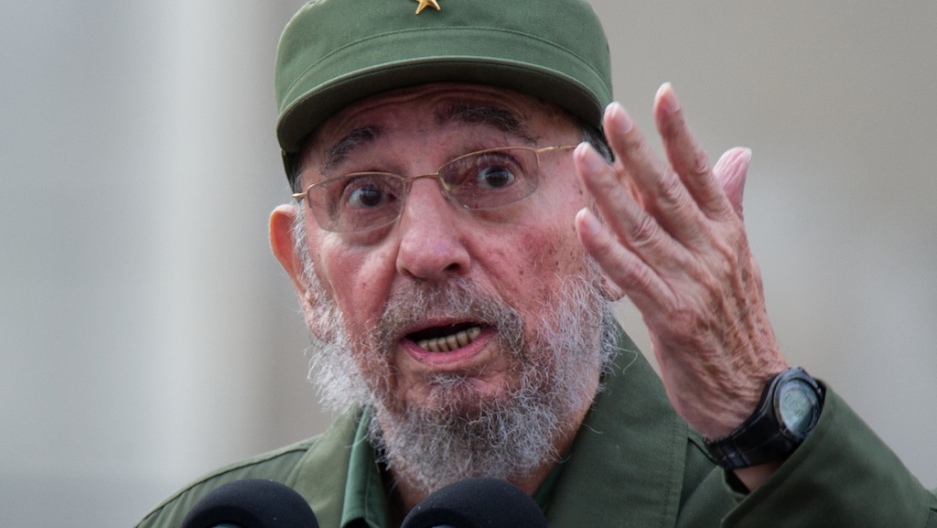 Former Cuban President Fidel Castro delivers a speech during the commemoration of the 50th Anniversary of the Committees of Defense of the Revolution (CDR) on Sept. 28, 2010 in Havana.
Credit: Adalberto Roque
Share

Former Cuban leader Fidel Castro has published an article under his name in state-run media today, dismissing rumors he is on his death bed.

Keen to stamp out the speculation, a defiant Castro said: "I don't even remember what a headache feels like," The Associated Press reported.

The article was published early today, Monday, on the official website Cubadebate, and includes photos of Castro standing near some trees and reading Friday's copy of the Community Party newspaper, Granma.

CNN reported the former Communist leader is dressed in jeans, a checked shirt and a cowboy hat, and is clearly aimed at stopping the rumors which began a week ago.

Castro said the rumors he had suffered a massive stroke and was in a vegetative state were wrong, and accused his enemies of spreading "stupidities" about him, Reuters wrote.

The article comes a day after a former Venezuelan vice president said Castro was "doing very well" and showed reporters a snapshot of the former Cuban leader that he said was taken the day before.

Speculation has surged over Castro's health in recent weeks. He has not been seen publicly since March, when he met with Pope Benedict XVI during the pontiff's visit to Cuba.Elias Jaua told The Associated Press that Castro greeted him warmly and accompanied him to the famed Hotel Nacional, providing photos of Saturday’s meeting.

“Fidel Castro was here yesterday, he brought a guest and spoke to workers and hotel leaders for 30 minutes,” hotel employee Yamila Fuster told the AP.

“They told me he looked very good,” added Fuster, who wasn’t at the hotel when Castro arrived. “He was wearing a checked shirt and a hat.”

On Friday, reports surfaced that the 86-year-old communist revolutionary leader had suffered a stroke.

Castro has not appeared in public since March.

The news that Castro might soon die has forced the City of Miami to make plans, the Miami Herald reported.

An area with a high concentration of Cuban refugees, defectors and their descendants, South Florida expects protests, parades or celebrations when he dies.

The original plan was to have them congregate at the Orange Bowl, which was torn down in 2008 to make way for Marlins Ballpark.

“I don’t think the Marlins would want that,” Regalado said. “Knowing them, they would charge to protest.”

Rumors of his death come as Cubans headed to the polls today in municipal elections.

Those at least 16 years old can elect municipal council members, Al Jazeera reported, although the small Cuban opposition has again criticized the vote.

The Cuban government says voter turnout was 95 percent in the last election two years ago.

More from GlobalPost: New travel rules allow more Cubans to leave; but will they return?