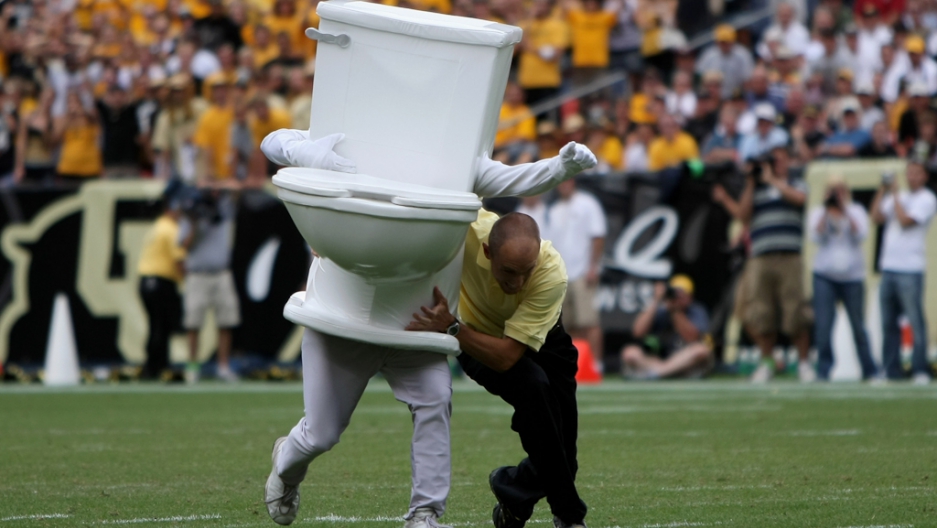 A running toilet is stopped as part of a promotion by Denver Water during a break in the action at Invesco Field in Denver, Colorado. Sept. 1, 2007.
Credit: Doug Pensinger
Share

Beware the lavatory: fifty-three people at a Berlin airport were sickened by an exceptionally pungent toilet on Saturday, causing the shut-down of an entire terminal and an investigation into the source of the fumes.

Victims of the fumes reported nausea and eye pain—and fire fighters who rushed to the scene at Tegel Airport to assist them also found themselves feeling decidedly ill, says NBC.

The Local reports that investigators eventually pinpointed the source of the trouble: an extremely high level of ammonia was found in the washroom in question.

The bathroom and the now noxious terminal were thoroughly aired out, according to authorities, and the airport was able to re-open.

Death-by-toilet-fumes is, worrisomely enough, not entirely unknown: last year, one person died and nine others became seriously ill when a McDonalds toilet in Georgia began to emanate a pungent chemical odor. Among the ill were fire fighters responding to the call, says the Daily Mail.

Perhaps more creepily, the gas dissipated very quickly, making it hard for researchers to figure out what it was, says ABC News—though cleaning chemicals were the likely culprit.