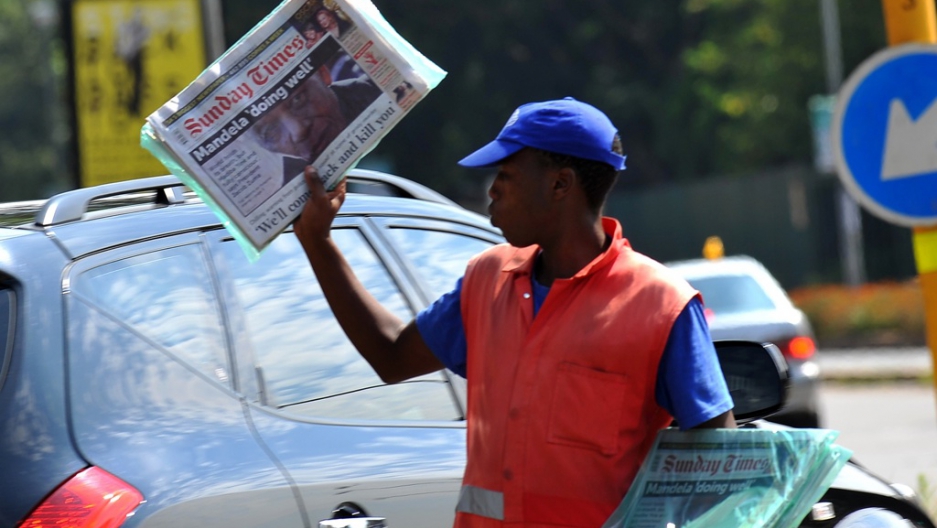 A newspaper street vendor holds up the day's edition of the South African 'Sunday Times' on February 26, 2012, in Johannesburg.
Credit: ALEXANDER JOE
Share

JOHANNESBURG, South Africa — Print media is an endangered species, a plight brought home by Newsweek’s announcement Thursday that after 80 years, it will fold its print edition.

But in South Africa, nothing could be further from the truth.

Here, a feisty newspaper industry is thriving and readership is growing. Newspapers are playing an essential role in the national conversation in a country where only 17 percent of people are online and cable TV news is a non-entity.

In emerging markets around the world, in fact, newspapers are a growing force. Brazil's print market is stronger than ever and is attracting international brands. The Financial Times announced earlier this month it would open a print edition in Sao Paolo. In India, too, circulation and readership of newspapers is on the rise.

According to a study conducted by researchers at Columbia University, newspaper circulation has increased 16.4 percent in South America, 16.1 percent in Asia and 14.2 percent in Africa between 2004 and 2009.

In Johannesburg, a city of some 4 million people, readers have a choice of eight major daily newspapers plus a number of influential weeklies. The day’s headlines are tacked up on lampposts throughout the city, enticing motorists to buy a copy from the orange jumpsuit-wearing hawker at the next set of lights.

Much of the industry remains endearingly old-fashioned. There are still evening editions here and classified sections. Bucking global newspaper trends, some of the papers are ludicrously wide broadsheets — too unwieldy to read on a train, plane or bus.

Analysts say what makes the South African situation particularly unusual is that both print media readership and digital media are on the rise.

"South Africa is experiencing an increasing print readership and a developing digital market, in contrast to the trend in more developed countries, which are experiencing erosion in print unit circulation as readers shift from print to online,” the report said.

Vicki Myburgh, a partner with PwC in South Africa, said newspaper circulation actually declined by 12.6 percent last year, but average readership rose by 16 percent — mostly due to more South Africans sharing copies of the daily paper, and to a lesser extent because of readers moving to digital outlets.

A large portion of the population doesn’t have internet access and still enjoys reading a printed low-cost newspaper, Myburgh said. Sharing newspapers became more common in the last year due to the economic downturn.

Another important factor driving growth is the expansion of African-language newspapers, which are not readily available online.

“Many titles are not published in English or Afrikaans, but rather in one of the African languages, which is the mother language of many readers and therefore their preferred manner of reading the news,” Myburgh said in an email.

“This is leading to a healthy print advertising market, which is in turn driving new launches, which indeed runs counter to the trends in many other more developed countries where print papers are closing."

A 2012 survey by the South African Audience Research Foundation found that while weekly newspapers and magazines have faced readership declines in the last year, the daily newspaper sector has strengthened.

“South Africa's newspaper market continues to hold its own, with the digital hurricane that's raging in other parts of the world not yet making landfall locally,” a report based on the survey said.

But media analyst Wadim Schreiner cautioned that the South African newspaper industry isn’t as healthy as it appears. He has big concerns about the shift to digital media, in particular.

Schreiner said there are now not enough users to make digital content financially viable — it is expensive to produce — and infrastructure barriers are hampering future growth.

South Africa has low broadband penetration, so the internet sector needs greater liberalization in order to take off, he said. Another roadblock is that many emerging users have no way to pay for online purchases, because they don’t have bank accounts or credit cards.

But Schreiner also sees big potential, noting the importance of newspapers in social discussion in a country where “everything is politicized,” and the huge number of potential readers.

“We actually have a very news hungry environment,” he said.

“In this country, for many people access to media only effectively started in 1994,” after the end of apartheid, Schreiner said. “There is a very big potential for consumption.”

And despite fears about the government’s proposed information bill, a highly controversial measure that could punish whistle-blowers and classify information deemed “in the national interest” as state secrets, the South African press remains impressively combative and independent.

“We allow quite a bit because we treasure that freedom because we didn’t have it for a very long time,” Schreiner said.