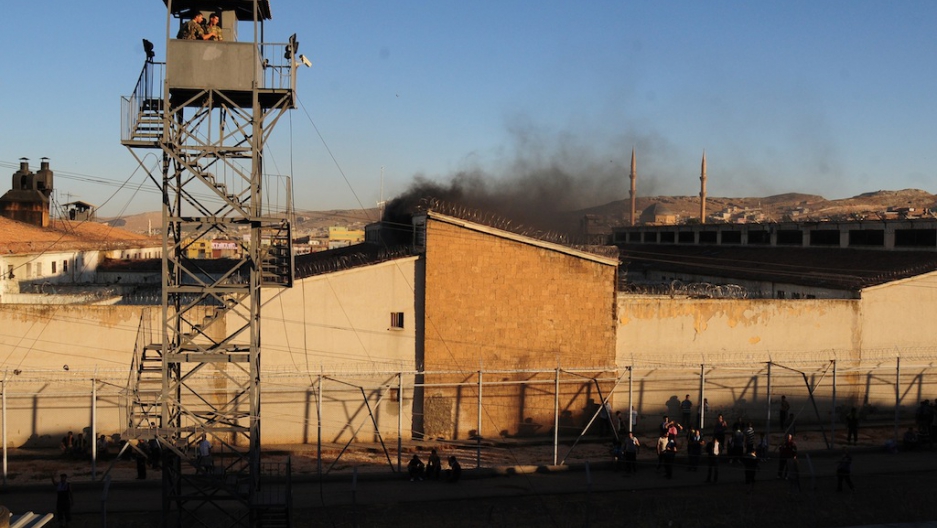 Smoke rises from Sanliurfa city prison in June, 2012, in Sanliurfa, Turkey. The prison saw a riot and two fires in a month, just one of Turkey's many prisons facing what a new report called "inhumane" conditions.
Credit: STR
Share

[UPDATED] ISTANBUL – A new report released by the Turkish parliament’s Human Rights Commission has revealed inhumane living conditions in a number of the country’s prisons, just as the government has started to crack down on cases of torture and ill treatment in many facilities.

One prison in the southeastern Mardin province stood out it the report for its poor sanitary conditions.

With an initial capacity of 480, the prison can now reasonably accommodate 705 people, as communal areas have been blocked off with mattresses, bumping up the prison’s capacity. Today, a total 987 convicts are reported to be residing in this prison, forcing 67 women to share one toilet.

“As soon as you walk into the facility, you can feel the lack of oxygen and stale air,” said the provincial police deputy, Abdurrahim Akdag. “There are an insufficient number of windows to let in clean air, and flies have swamped the sleeping areas where 60 women share a ward designed to accommodate only 20.”

In 2004, Ankara implemented the Judicial Modernization and Penal Reform Program an intensive system overhaul, funded by the European Commission and the Council of Europe. The aim of the program was to help support Turkey’s judiciary and prison system reforms and make sure Turkish authorities implemented the changes to meet European standards.

While Turkey has since adapted laws prohibiting collective, physical and cruel methods of punishment in prisons, there is still a long way to go to meet EU standards when it comes to implementation and living conditions, as well as inhumane torture practices.

Although the program has been officially running for years, these practices continue. The Turkish Human Rights Foundation (IHD) reported 724 cases of torture and ill treatment in Turkish prisons in 2011. The ill treatment of prisoners carried out by prison staff, the lack of communal activities, health care limitations and prisoner-to-cell ratio are principle areas of concern put forward by the EU, which Turkey continues to petition for official entry.

The most striking example of this, according to human rights defender and PhD student Meral Aydeniz, is that up to four women share one bunk bed in Mardin prison.

“The prison is obviously over capacity, no wonder there are such big health issues when people are sleeping on top of each other with no air,” she said.

A large-scale incident of food poisoning was reported at the prison in April. “Some 60 people got sick and were sent to the hospital,” the prison’s detention officer was quoted as saying in the report, adding that the number later increased to 232, as prisoners took advantage of the outbreak.

An investigation into the incident found a significant amount of E.coli in the yogurt served to prisoners, as well as serious water supply issues that have raised concerns for the commission.

On average, water is available for only two hours per day, for nearly 1,000 people, which has caused dire hygiene conditions within the facility. The commission says the water issue must be addressed as a matter of urgency, as Mardin reaches scorching temperatures for a large portion of the year.

More from GlobalPost: Turkey puts 44 journalists on trial for terrorism

Meanwhile, Kocaeli Prison in the Kocaeli province was also mentioned in the report for being over capacity.

Since the recent passing of the Third Judicial Package, convicts who are one year away from release are required to relocate to the Kocaeli prison. Here the parliament’s report claims that up to three people share one bed.

Each of these prisons has only one doctor, who fails to keep up with the medical needs of the inmates. While some have had to wait weeks for a hospital referral, others have waited up to nine months to see a dentist.

A 2011 Rights Violations Report, assembled by the Prison Watch Council, highlights how the “family doctor” system, in which one doctor visits one prison twice a week, delays access to medical treatments. In 2011, 617 prisoners were denied medical treatment and health care rights, according to the report.

“Prison conditions that violate inmates’ rights cannot be defended on the basis of ‘insufficient resources.’ Life in prisons should be regulated so as to resemble the positive aspects of public life as closely as possible,” said the Human Rights Foundation of Turkey (TIHV) in a report this year.

Still, the parliament’s Human Rights Commission has commended both Mardin and Kocaeli prisons after no cases of torture were found at those prisons in their investigation, but they warn that the living conditions are so detrimental that they could cause fatalities should they not be addressed.