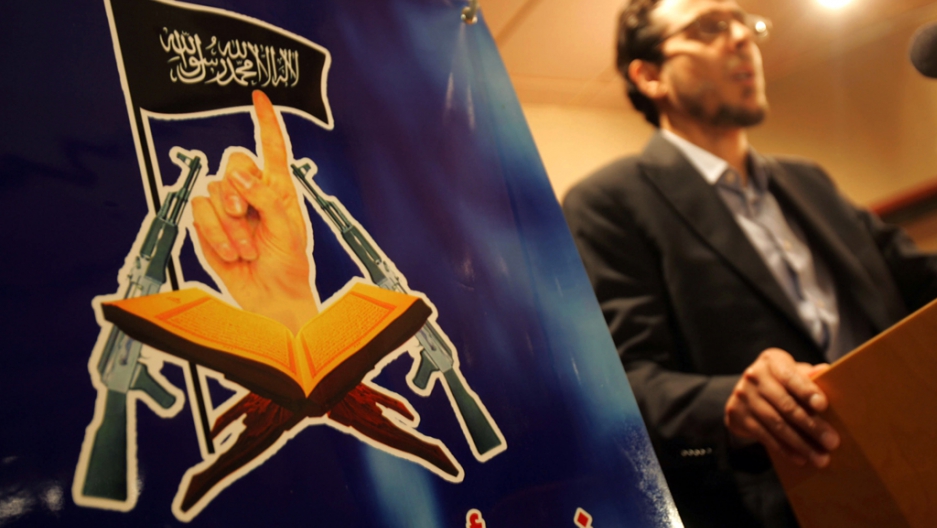 Hani al monsouri, spokesperson of the hardline Islamist group Ansar al-Sharia gives a press conference at the Ismalic business center in Benghazi on September 13, 2012, following an attack on the building late on September 11 in which the US ambassador to Libya and three other US nationals were killed.
Credit: AFP
Share

Ahmed Abu Khattala, who was identified by a witness and officials as one of the Islamist militia commanders leading the attack on the US consulate in Benghazi on Sept. 11, has denied being involved.

Khattala told Reuters in an interview that he was present during the incident but wasn't one of the ringleaders.

According to the Associated Press, Khattala describes himself as a founder and commander of the Abu Obaida Bin Jarrah. He told the AP in a separate interview that he went to the site of the attack to rescue men he had been informed were trapped inside.

The New York Times noted that "just days after President Obama reasserted his vow to bring those responsible to justice, Mr. Abu Khattala spent two leisurely hours on Thursday evening at a crowded luxury hotel, sipping a strawberry frappe on a patio and scoffing at the threats coming from the American and Libyan governments."

Indeed, Khattala said, "These reports say that no one knows where I am and that I am hiding," according to Reuters. "But here I am in the open, sitting in a hotel with you. I'm even going to pick up my sister's kids from school soon."

The Benghazi attack, which led to the deaths of four Americans, including US Ambassador Chris Stevens, has become a focal point in the US presidential campaign, with conflicting reports over those responsible for the attack.

The Times classified Khattala's manner as defiant. No authority has questioned him on the attack, he told The Times, and he has no plans to go into hiding.

"All this talk is baseless,” Khattala told the AP. “I am in Benghazi, have a job and live my life normally. I have not been accused by any party with any allegations ... I am not a fugitive or in hiding."

Meanwhile, US government sources told Reuters that Khattala is being probed as a suspect in the attacks, though investigators are not clear what role he played.

A Libyan interior ministry official with knowledge of the investigation told Reuters that Khattala was photographed at the consulate on Sept. 11, but there was not enough evidence for an arrest. The official said, "Just because someone is there doesn't mean they were behind it."

Khattala's account of the attack given to The Times alleged that the assault grew out of a spontaneous protest when Libyan or American guards inside the consulate's compound fired on the protesters, provoking them.