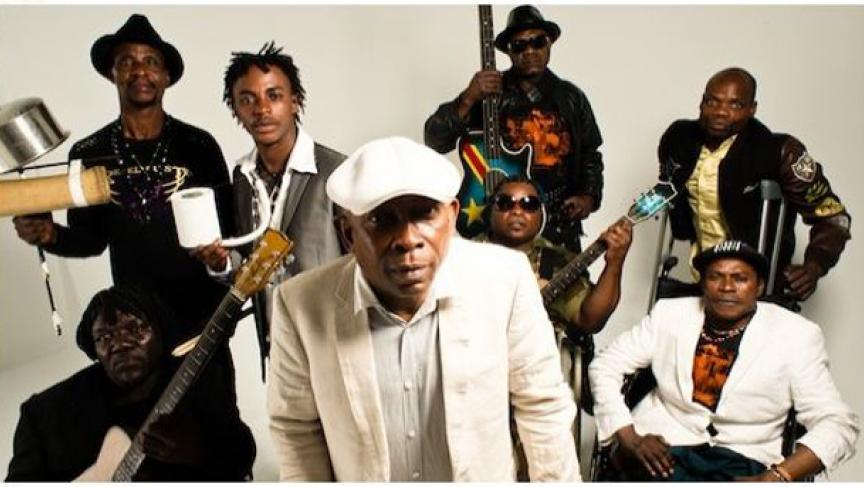 Share
Day light is turning into twilight through the two-storey-high window panes at the Institute for Contemporary Arts, or ICA, in Boston. Inside the ICA theatre, four men in wheelchairs, one on crutches, and their young rhythm section are running through a tune. This is Staff Benda Bilili, a band from the Democratic Republic of Congo. We featured them on the program about three years ago when they first caught the world's attention. Let me remind you of their remarkable story. The elder core members of the band had been homeless in the Congolese capital Kinshasa for many years. Their encampment was just outside the city zoo. Also noteworthy is that they had been stricken with polio in their youth. So they rolled around Kinshasa in a variety of wheelchairs, some motorized, some pedaled by hand. Then in 2009, fame knocked on their doors. A documentary and a studio album thrust them into the international spotlight. Staff Benda Bilili is touring the US for the first time, starting in Boston. The band has toured many other parts of the world already, so American audiences are in for a treat. I saw them in 2009 in Copenhagen. At the time I wondered whether a grueling tour schedule for these older men with polio would get tiring. But bandleader Ricky Likabu says that after three years, it is no problem. Likabu says he doesn't think of himself as disabled. "My eyes see. My body, you can see that I'm still working," he says. "And my head, it still thinks. And that's why, I can do anything anyone else in the world can do. Personally, I don't see my handicap. I only see my brain." Ten years ago, the group took on a homeless kid who used to hang out with them: Roger Landu, now 24, is an indispensable member of the band. "He was playing a homemade stringed instrument called the satongay in the street," Likabu says. "But I thought, let me put him in the band. That'll be a good thing." The band sets up spontaneously in the green room at the ICA and plays this song called Djambula. They sing about religion and money, how people from snake-oil evangelists to Muslim extremists get their money. In Congo's Lingala language, Staff Benda Bilili means "look beyond appearances." And that is the fascinating thing about this band. You notice their wheelchairs at first. But once the music starts, none of that matters. And that is magical, to watch four men, polio victims, lose their disability, even metaphorically, in front of your eyes.