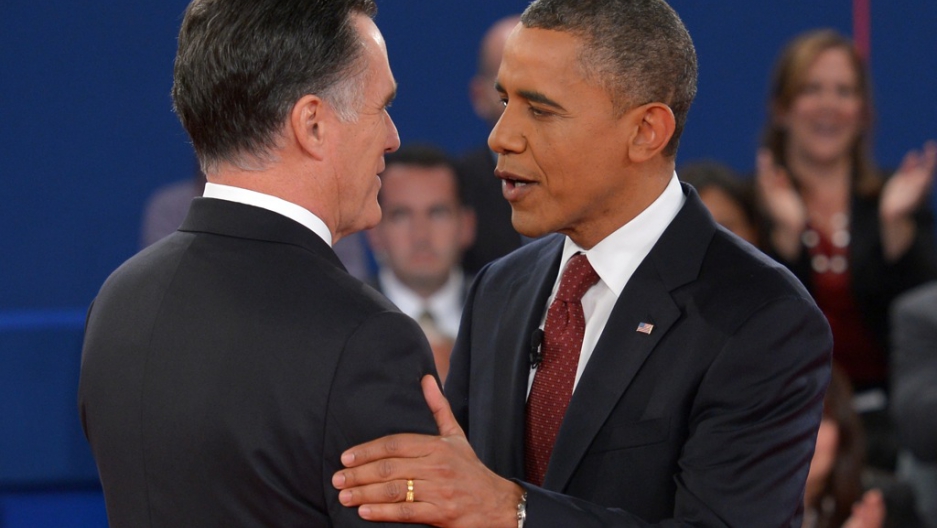 Throughout the hour-long townhall at Hofstra University, the presidential contenders brought up China 24 times—more than health care—and in an almost uniformly negative tone.

“When he talks about getting tough on China, keep in mind that Governor Romney invested in companies that were pioneers of outsourcing to China, and is currently investing in companies that are building surveillance equipment for China to spy on its own folks,” the president said.

Romney, not to be outdone, bashed Obama for allowing China to become the world’s largest manufacturer on his watch, and whipped out a counterattack on Obama’s investments.

“Mr. President, have you looked at your pension?” Romney demanded. “Let me give you some advice. Look at your pension. You also have investments in Chinese companies.”

So what’s an ordinary Chinese person watching from halfway around the world to make of all this? On Weibo, China’s equivalent of Twitter, thousands of users discussed and responded to the debate. As you might expect, a number were indeed bothered to see their country used as an all-purpose whipping boy.

“Romney’s China-bashing was a blunder,” wrote one. “In a nutshell, Americans want Chinese-American relations to be friendly, and don’t want China to become more powerful than the US.”

“They are liars!” wrote another.

But what’s surprising is how many people seemed to take it in stride. Whether it’s because months of heated anti-China rhetoric have made them immune to these attacks, or because they really don’t take them seriously, many Chinese watchers were simply focused—like their American counterparts—on Obama’s performance compared to the first time around.

The president's greater moxie won good reviews in China. Many were pleased that Obama “seemed to have improved” on his dismal, downcast appearance at the first debate. “I just watched the second presidential debate, and all I can say is: Obama started to go on the attack!” wrote one.

The GOP candidate, however, came in for a drubbing. “Romney’s reply is weak,” was one user’s response to his pension-fund zinger.   “He should examine his conscience,” wrote another.

Reflecting on the debate, one Chinese observer compared Obama to Abraham Lincoln and said the debate revealed that he wants to fight for fairness, the middle class, and equality. Romney, on the other hand, “represents the empowered class, even if it means letting the weak prey on the strong.”

“If I were an American citizen, I would support Obama!,” he wrote.

Even Xinhua, the state-run news agency, sounded more jaded than genuinely shocked at the candidates’ use of China as a foil.

“Unsurprisingly, [the debate] turned into a vanity fair for China-bashers,” the editors wrote, warning mildly that “the presidential candidates should be mindful of going too far in bashing China, if they feel they must do so in order to win votes, because the specificity of their promises will leave them few options but to follow through.”

So why is the public response not angrier? Perhaps after years of observing America’s rough-and-tumble political campaigns, where various foreign nations trade places as a punching bag (Russia, Iran, Mexico), they realize that when a candidate is in office, the tune on China changes dramatically. As many have observed, Obama also promised in 2008 to declare China a currency manipulator.

As former US ambassador to China John Huntsman told Foreign Policy's Isaac Stone Fish, “I think [China bashing has] happened for so long that [the Chinese] have grown to expect it during the election season. I think it affected them more in the earlier years, but now they've grown accustomed to the political cycle, just as we've grown accustomed to the leadership cycles in China, where they do the same thing to us.”

China is going through its own once-a-decade political transition now, causing a tightening of censorship controls, swifter crackdowns, and heightened rhetoric toward the US in state-run media.

Of course, that’s not to say that the reflexive use of China as a bogeyman won’t have consequences.

As Liu Chang, a commentator, wrote in a recent Xinhua op-ed, “these chameleonic [American] politicians should not always expect that the wounds they have inflicted to the China-U.S. ties would heal automatically.”