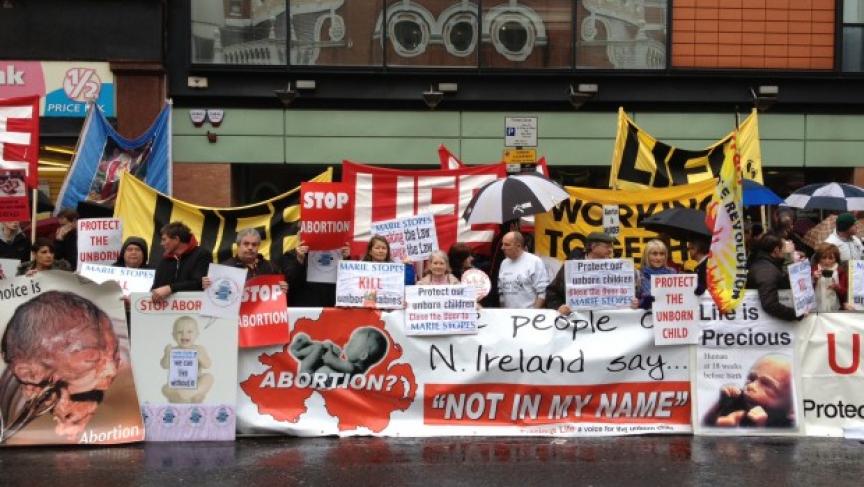 About 200 anti-abortion protesters turned up to demonstrate against the Marie Stopes Reproductive Clinic. The new center will be the first to offer abortions on the island of Ireland. (Photo: John Sepulvado)

Share
On the eighth floor of a glass plated Belfast office, next to a dentist and a solicitor, sits the first abortion clinic to operate on the island of Ireland. It will be the most heavily regulated abortion clinic in the UK. Northern Ireland law prohibits surgical abortions, so the doctors will give patients a pill, and if there are no complications, send the women home after a few hours. The women will have to show the pregnancy is a risk to their physical or mental health, and that conception occurred no more than nine weeks prior. The clinic, operated by Marie Stopes International, will also offer other reproductive services, as well as crisis and sexual counseling. Marie Stopes, a British organization similar to Planned Parenthood, opened the clinic despite intense opposition from anti-abortion groups, including Pro-life Ireland and the Catholic Youth Defence. Yet, despite full page advertisements from those groups, as well as orchestrated phone calls and emails to political leaders, demonstrations and picketing, the abortion clinic opened Thursday at lunchtime as scheduled. If it weren't for the approximately 200 anti-abortion demonstrators peacefully protesting on the sidewalk, there would be no indication the clinic is located on Belfast's busy Great Victorian St. "There is no way a building would have been built back in Dublin 20 years ago, or Belfast, or anywhere on the island," says 42-year-old Irish educator Barbara Kennedy. "The priests would've been, I would imagine, in the pulpits, on the Sunday, saying 'you've got to go against this,' and people would have listened." "But you no longer go [to the church] for your moral guidance," says 42-year-old college lecturer Fiona King. "No, we're not as influenced by it," agrees Kennedy. The women, like many others in urban centers, say the Irish clergy lack the moral standing, after numerous scandals in Catholic and Protestant churches, to effectively mount a campaign against the clinic. Many Irish pastors and priests, like Trevor Brock, acknowledge that religious influence on the island is waning. Brock is the pastor of the Belfast Great Victoria Street Baptist Church, located just two blocks away from where the abortion clinic. He describes Irish Baptists as ideological cousins to the conservative Southern Baptist Convention in the United States. Like the majority of those members, Brock's fiercely opposed to abortion. Yet, Brock says he has no plans to talk about the clinic's opening during this Sunday's service. "I probably won't mention it all," Brock says. "To make big blanket statements, I just don't see the value of that." Brock also doesn't plan on protesting the clinic, or urging his parishioners to protest. "It doesn't show much compassion to people who need compassion on the ground," says Brock. "We'd rather work through the issues and think our way through them and talk to folks face to face, then enter a confrontational battleground scene." The protesters that did show Thursday took an almost gentle approach. Organizers went so far as to urge the group not to litter, or drop their cigarette ends on the sidewalk. "We respect [the clinic's] right to operate … under the law of man," says Michael Tiller. The 53-year-old came from Cork, a six-hour car ride to protest the clinic. "But we value life, and God's law, and that must come first." Opponents like Tiller fear the clinic will lead to more liberal abortion laws, and attitudes. Abortion is illegal in the Republic of Ireland, and UK official health statistics show more than 6,000 Irish women travel to England for surgical abortions. Only 43 abortions, according to those same records, were performed at hospitals in Northern Ireland in 2011. Marie Stopes International does not expect that number to dramatically increase as a result of the clinic's opening.