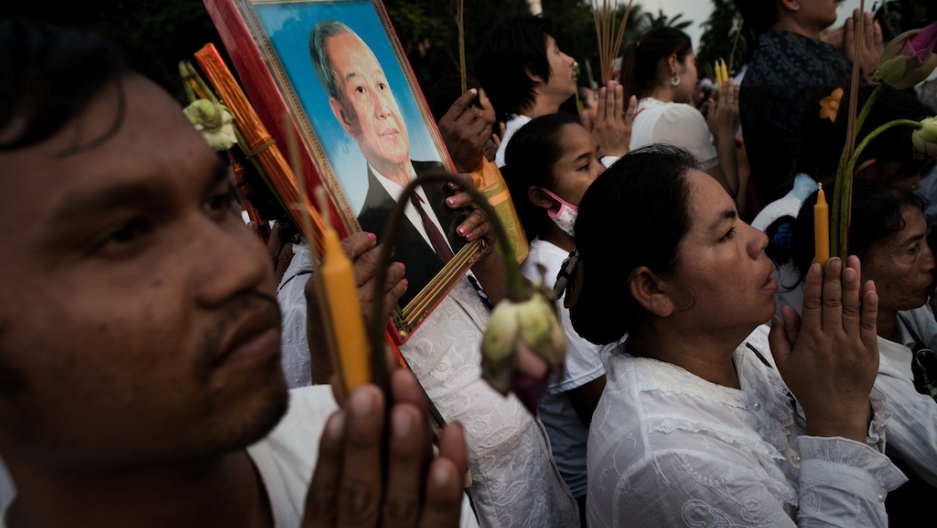 Cambodian people pray as the convoy transporting the coffin of late former king Norodom Sihanouk passes by in front of the Royal Palace in Phnom Penh on October 17, 2012. Tens of thousands of mourners lined the streets of the Cambodian capital on October 17 to pay their last respects to revered former king Norodom Sihanouk on his final journey home from China.
Credit: Nicolas Asfouri
Share

PHNOM PENH - Cambodians turned out in droves Thursday to mourn King Father Norodom Sihanouk, who died Monday at the age of 89.

Sihanouk died in Beijing from a heart attack, and his body was sent to the Cambodian capital of Phnom Penh Wednesday by plane. His body was taken to the Royal Palace downtown in a procession, accompanied by Sihanouk’s widow Queen Monique, his son and heir, King Norodom Sihamoni and Cambodian Prime Minister Hun Sen. His coffin was placed in a float styled after a sacred golden bird.

It's estimated that approximately one million Khmer lined the streets to watch the King make his final journey to his former home.

Read more from GlobalPost: Former King Sihanouk is dead. What's next for Cambodia?

Thursday, the scene at the Royal Palace was more muted than the tumult of Wednesday, but Cambodians were still turning out in droves to mourn Sihanouk's death. The atmosphere took on the feeling of a festival, as people brought their children, grandparents, and pets to sit on the lawn outside the Royal Palace and watch.

They lit incense, cried, and scribbled their remembrances inside a series of huge guest-books that were set out outside the palace. The loss is a blow to many Cambodians who grew up with affectionate feelings towards the same King who referred to his people as "his children."

A small cottage industry has swiftly sprung up in Sihanouk photographs and memorabilia, which is no surprising at all in a society as fiercely mercantile as modern-day Cambodia—an irony, in light of the Khmer Rouge, that the beleaguered former king might have appreciated.

Young men with tripods and cameras offered to take photographs of passersby in front of the Palace; older women sold popcorn balls and cotton candy. Packs of children ran and shrieked at each other on the lawn, many of them wearing black-and-white ribbons.

A group of Khmer men and women held their hands to their hearts when I asked them why they were so sad over Sihanouk's passing. "He was a good king," they assented, clutching memorial photographs of Sihanouk to their chests.

There were photos of Sihanouk as a young man, and Sihanouk as an old man with the royal family: photos were already being sold at a rip-roaring pace of the dramatic procession of yesterday. Most Khmers weren't alive during the death of the preceding king (and Sihanouk's father) Norodom: they wanted souvenirs of this historical moment.

A group of older women, many of them Buddhist nuns, gathered on the pavement in front of the Palace, arranged themselves into a semicircle, and began singing a haunting Buddhist funeral dirge: one of the singing women was holding a photo and pointing to it animatedly between singing bouts.

"She says she was the King's mother," a woman nearby dutifully interpreted. "You know, in another life."

Sihanouk's body will lie in state in the Royal Palace for three months, according to news reports. It will then be cremated, as Sihanouk had requested well before his death. The Water Festival has been canceled for the second year in a row, and bars and nightclubs have been requested to tone down their usual activities: this is a nation in mourning.

Sihanouk's legacy may be considered decidedly mixed on the world stage, but that's not the case in Cambodia, where the king is remembered for managing to survive French rule, a coup, imprisonment by the Khmer Rouge and constant conflict with Cambodian Prime Minister Hun Sen's ruling Cambodian People's Party.

Here, his stolid face continues to gaze out over people's homes and government buildings. The future of the Cambodian monarchy is in doubt, but it is almost certain that Sihanouk will be remembered for many years to come as an emblem of a Cambodian Golden Age that many yearn to recapture.