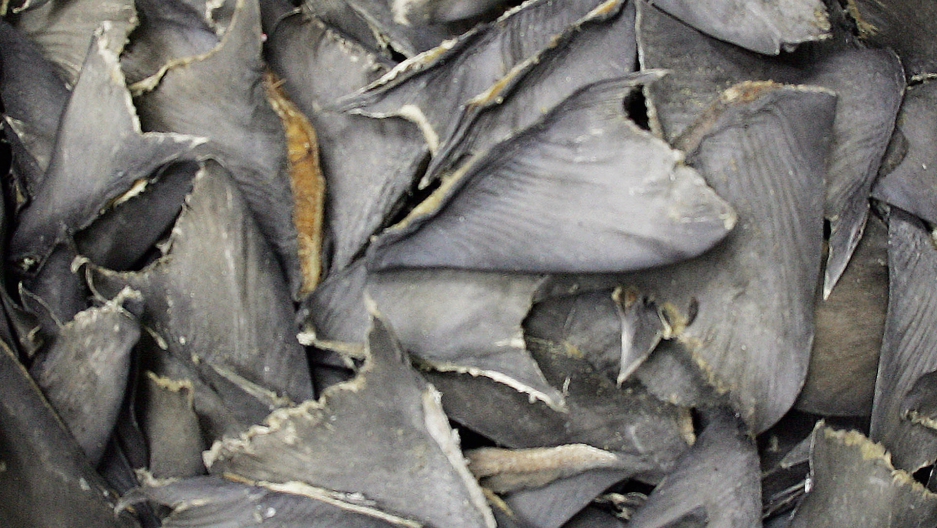 Shark fins in a bag await delivery at a wholesale warehouse in Hong Kong, where they will be used for dishes like shark fin soup. Conservationists have fought to stop the practice of shark finning.
Credit: Laurent Fievet
Share

SAN JOSE, Costa Rica — World leader in environmental conservation, Costa Rica has banned the import and export of uncertified shark fins in a bold new move that it hopes catches on across Central America, a region haunted by a destructive fishing practice.

For years, marine life advocates on the Latin American isthmus have waged war against shark finning, the wasteful practice of lopping off shark fins at sea and hurling the body overboard in order to save space in cargo holds for the high-priced appendages.

Now backed by presidents and billionaires, environmentalists hope this latest pro-shark step drives the decades-old battle into the political limelight.

Some 400,000 sharks were slaughtered at sea in Costa Rica last year for their fins, Castro said. Most of the product is shipped to Asian countries where consumers pay a premium for the flippers in order to make traditional dishes such as shark fin soup.

At a Chinese market in Chicago, fins sell from $100 to $750 per pound depending on the species while low-yield shark meat fetches between one and five dollars per pound.

Shark populations in Costa Rica have dropped roughly 60 percent since 1991, due in part to finning and overfishing, according to local advocacy groups.

“All of this for a bowl of soup that doesn’t even taste very nice either, so I’m told,” British business tycoon Richard Branson said last week after Costa Rica passed the prohibition, which would also revoke fishing licenses from any boats caught finning. “Let’s hope we can persuade many other countries around the world to follow suit.”

Costa Rica banned finning in 2001 with a landmark law that required all boats to dock sharks with fins naturally attached to the body, a regulation that other Central American countries have also adopted. But a series of loopholes made it possible for illicit trade to continue.

More from GlobalPost: After a panda cub's death, weighing the cost of the cute creatures

But fin imports from neighboring Nicaragua rose after the private dock closure. Sea life protection group PRETOMA estimates that some 20 tons of shark fins were shipped from Nicaragua to Costa Rica in 2011. The group has sought support from legislators to ban shark fin imports.

“We have no guarantee that these fins that are coming from Nicaragua weren't illegally removed,” leftist lawmaker from the Citizens Action Party Maria Venegas told GlobalPost. “We need greater controls. If we want our foreign and domestic policies to be congruent, we can’t accept fin imports.”

Nicaraguan fishing laws prohibit finning and boat owners in that country say that fin exports are removed legally at shore. Watchdogs have yet to prove that Nicaraguan shark fins were cut off at sea.

Fishing institutes in all of Central America’s seven nations agreed in January to establish a certificate program designed to verify which fins have been legally detached on land. The countries have also ratified regional accords that ban finning at sea.

Under Costa Rica’s new executive order, only fins that are certified will be allowed to pass through the country, a measure that lawmakers say will help crack down on illegal finning.

Most countries in the region have not yet laid out guidelines for certification. Guatemala’s fishing institute officials said they hope to have a framework in place by the end of the year.

But even with the tight restrictions, monitoring vast waters has been difficult and some skeptics doubt the country has the resources or political willingness to crack down on fin smugglers.

“At this very moment, poachers are prowling [Costa Rica’s] waters and the rangers do not have the resources to deal with them,” Paul Watson, founder of marine activism group Sea Shepherd, said in a statement this week. He alleged powerful Chinese business interests in the small Latin American country have kept the government from issuing a full ban on the shark fin trade.

Costa Rica has requested Watson’s extradition on charges that he attacked a Costa Rican fishing boat in Guatemalan waters in 2002 that was allegedly finning sharks.

Much of illegal maritime activity skates under the radar, especially in Costa Rica where 600,000 square kilometers of territorial waters — 10 times the size of the country, which itself is a bit smaller than West Virginia — make up the largest national water extension in Central America.

From June through August this year, Costa Rica’s Coast Guard detained three boats with hundreds of detached shark fins on board. They included one vessel within the limits of the cherished Cocos Island, a protected marine area renowned for its rich biodiversity including hammerhead sharks and magnificent stingrays.

Satellite imagery has provided possible evidence of a dozen other boats that could be finning sharks in Costa Rica’s Pacific, but captures have proven tricky and usually depend on timing, according to the Coast Guard.

Chinchilla announced last week that her government will invest $15 million in a new radar system to boost sea surveillance.

Shark advocacy groups called Costa Rica’s latest anti-finning norms a victory for the region, but said they will be watching closely as authorities scramble to enforce the new rules.

“We’ve made a lot of advances to fight finning, but there’s still a lot that needs to be done,” Randall Arauz, president of Costa Rica’s PRETOMA, told GlobalPost.

“We are celebrating for now, but the second we see a single fin cross our border we will be making noise.”