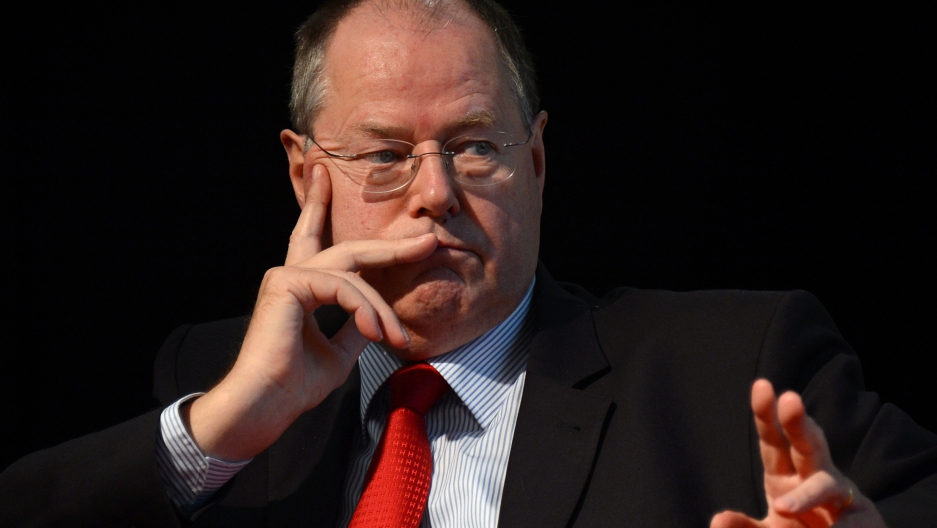 BERLIN, Germany — When the collapse of Lehman Brothers threatened to set off a global depression in 2008, Peer Steinbrueck stood shoulder to shoulder with Chancellor Angela Merkel to steer his country through the financial crisis.

Now the former finance minister who was once her right-hand man has a new challenge: to unseat Merkel in an election next year.

Although he faces a tough campaign, he may have a shot. Even though the chancellor’s approval ratings remain high, the complexities of Germany’s political system mean there’s no guarantee she’ll be able to form a government in 2013.

More from GlobalPost: IMF puts onus on US, Europe

A member of the Social Democratic Party (SPD) who was granted his ministerial post as part of a grand coalition with Merkel’s Christian Democratic Union (CDU), Steinbrueck has since emerged as someone who can pose Merkel a serious threat.

Many Germans see him as a safe pair of hands and a very competent crisis manager who helped overcome the financial crisis by introducing a stimulus package and recapitalizing banks.

The heavyset 65-year-old is also a feisty, straight-talking politician known for his acerbic wit and intellectual prowess, particularly on economic matters.

His combative personality stands in sharp contrast to Merkel’s cautious reserve and propensity to frustrate by refusing to take clear lines on many issues.

Analysts say Steinbrueck is best-placed among SPD leaders for attracting voters from across the political spectrum.

“He can go fishing in the government camp,” says Timo Grunden of the University of Giessen. “He comes across as serious, middle-class and with a high level of competence in financial policy.”

Other possible contenders, former Foreign Minister Frank-Walter Steinmeier and party leader Sigmar Gabriel, were believed to lack sufficiently broad appeal. Their decision to bow out appears to have been vindicated — so far.

The good news followed a week of negative publicity, including criticism of Steinbrueck’s earnings from lucrative speeches, books and membership in company boards.

Although he appears to have emerged relatively unscathed — his personal approval rating notched up a point to 35 percent — it still lags 11 points behind Merkel’s strong 46 percent.

But in a political system that’s not as personality driven as in other countries, that may still be enough to unseat her.

The FDP’s fate severely constrains Merkel’s options for forming a government next year: The current constellation of parties would realistically enable her to stay in power only with a revival of the grand coalition with the SPD, which lasted from 2005 to 2009.

Although pairing the two largest parties may produce a stable government, the SPD is desperate to avoid that scenario after it emerged from the last coalition with its lowest support since the war, just 23 percent.

Steinbrueck has promised to aim for an SPD-Green coalition instead, and says he wouldn’t serve in cabinet under Merkel, a point analysts say may prove crucial.

The conflicts hark back to a series of tough labor reforms introduced by former SPD Chancellor Gerhard Schroeder that alienated many party members and traditional voters. The party’s left still views Steinbrueck with suspicion for his enduring support for the unpopular measures.

Klaas Huebner, a former SPD member of parliament who's now a member of the party’s think tank, the Friedrich Ebert Foundation, says it would be a mistake to reopen those wounds. “The SPD has a chance only by finding a way to unite behind Peer Steinbrueck.”

If it were to win enough votes, the SPD would also struggle to form a coalition thanks to the political scene’s fragmented state, particularly on the left.

It refuses to enter a coalition with the Left Party, formed from the successor group to the old East German Communists and disaffected SPD voters, at a federal level, although it has successfully worked with the party in regional governments during the past decade.

Another thorn in the SPD’s side, the upstart Pirate Party also attracts protest voters and many young people. It polls at 6 percent, enough to enter parliament. However, many analysts predict its support will diminish as the election campaign heats up.

The SPD’s ideal coalition partner, the Greens, have seen their support stagnate at around 12 percent since Merkel announced Germany would shut down its nuclear power plants last year.

“Now energy policy is no longer an environmental issue,” Grunden says, “rather a social and economic issue, areas where the Greens are regarded as having less competence than other parties.”

SPD strategists hope Steinbrueck will be able to both mobilize the Social Democratic base and attract dissatisfied voters in the center.

The party will focus on social issues and campaign for a minimum wage and better rights for temporary workers, while Steinbrueck’s centrist views may also attract more conservative voters.

But he faces a difficult task overcoming the popularity Merkel draws from her handling of the euro crisis, which will play an important role in the campaign.

Steinbrueck may struggle to present himself as a credible alternative to a leader whose dominance on the European stage has increased her stature back home. The traditionally pro-European SPD has supported her in parliament on bailouts to debt-ridden countries and other measures even when she failed to muster support from within her own coalition’s ranks.

The SPD has differed from the government mainly in its calls for easing austerity and promoting more growth, although it has dialed back somewhat on its initial support for euro bonds.

That may make the party appear out of step with an increasingly Euro-skeptic public.

“I’m not sure the SPD has realized that being the pro-European party, being for more solidarity and integration, could see them fall into a trap,” Grunden says.

Merkel, in contrast, has successfully managed a tricky balance of appearing to want to save the euro and fighting to protect German taxpayers.

If the situation in Europe and the German economy don’t deteriorate, analysts believe her chances of winning next year will be good.

Faas believes that will leave the SPD to argue that “we won’t do everything different, but we will do a lot of things much better.”