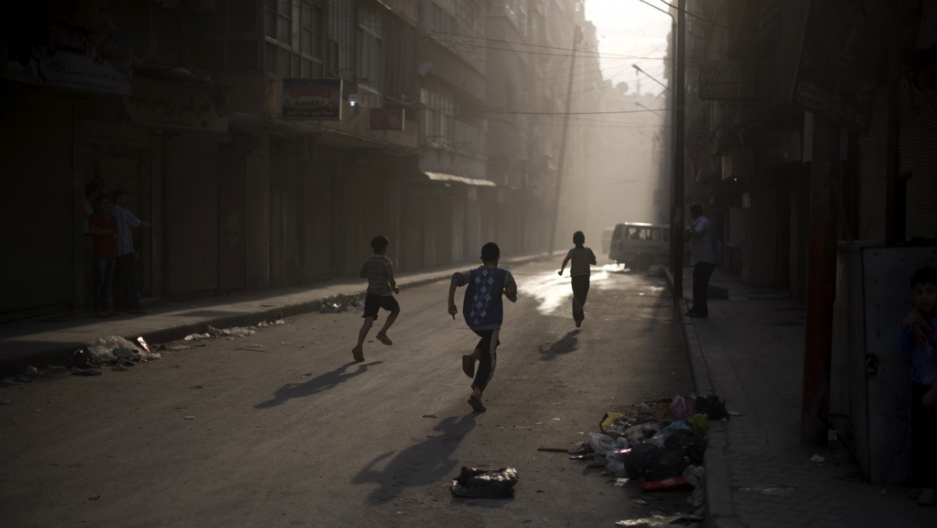 ALEPPO, Syria — Behind the mansion they were occupying, a group of half-naked rebels whooped with joy as they cannonballed into the murky, half-filled swimming pool.

It was July in the small town of Anadan, about 10 miles from Aleppo, Syria's largest city. Anadan was a ghost town, deserted except for the Free Syrian Army and the sounds of the near constant barrage of regime shelling.

The junior commander, an illiterate 24-year old, joked that while the war raged all around it, the people of Aleppo were only concerned about their barbecues. He swore the rebels scrabbling through the countryside would soon make their way to Aleppo. He promised Aleppo would burn.

Three months later, Aleppo is on fire. The 1,000-year-old market has been gutted, and the rebel-controlled west lies in ruins. Last week's massive suicide car bombings, which leveled blocks of the government center, left craters some 10 feet deep.

Aleppo, a city of about 3 million people, was once the financial heart of Syria. As it continues to deteriorate, many civilians here are losing patience with the increasingly violent and unrecognizable opposition — one that is hampered by infighting and a lack of structure, and deeply infiltrated by both foreign fighters and terrorist groups.

The rebels in Aleppo are predominantly from the countryside, further alienating them from the urban crowd that once lived here peacefully, in relative economic comfort and with little interference from the authoritarian government of President Bashar al-Assad.

“The terrorism here in Syria is spreading, and the government has to do something about it,” said Mohamed Kabal, a 21-year-old university student.

“The people in Syria must have an iron hand to rule them, otherwise we will eat each other,” he said, unconcerned that the rebel sympathizers nearby might hear him. “If the government is gone we will have a civil war that will never end.”

As suicide bombers become the rebels' most effective weapon — illustrating both their desperation against Assad's air power and the growing presence of insurgents, both local and foreign, who once fought the US occupation in Iraq — the regime’s attacks too are getting more vicious.

The day after the suicide strike destroyed the government center, the Syrian army retaliated by launching an air assault on a school housing refugees. Witnesses called it a massacre, 10 civilians killed and about 60 wounded.

More from GlobalPost: Inside Syria: One hospital's story

Both attacks leave indelible marks on the population: a child dead on a hospital table, a wounded girl in her father’s arms, a mother screaming, a dazed 12-year old asking if the sheet on the ground covers his father.

Through it all, though, some in Aleppo still support the rebels. Hamza, a medical school graduate who treats wounded fighters on the front line said he thought the Free Syrian Army made the right choice to detonate the car bombs. It was an area where regime forces were centered, he said.

“And those who say there were civilians there, I say that we are in a war and you must not blame the FSA for bombing the Air Force Intelligence building, for instance, because no civilians should be there,” he said.

It’s the same argument the regime uses when it shells neighborhoods it believes are sympathetic to the Free Syrian Army. Any civilians still in these areas, it claims, must be supporting the “terrorists” and are legitimate targets.

Faez Shoaip, 63, used to be a taxi driver in Brooklyn. He returned home to Aleppo eight years ago and now is worried about the direction of the conflict.

“We don’t like Bashar, we don’t the like regime. We want them to go out. But there is an easier way. Kill everybody? Destroy the country just to change the regime? It’s too much,” he said, shaking his head.

More from GlobalPost: Life and death in Aleppo (PHOTOS)

Faez and his neighbors are tiring of the rebel leaders on the ground. And they are weary of the shells falling all around them. They say they are frustrated that they have lost everything in a matter of months. The frustration shows. Shopkeepers whisper their discontent. Residents wave rebels away as they drive past.

While Faez visited his children in Idlib province last month, one rebel group broke down his apartment door and set up shop.

“They use everything. They changed my house into a camp,” he said. “They make a mess of everything." When he complained they were wearing his clothes and destroying his property, the young rebel commander told him: “This is a time of war.”

It isn’t just civilians who are tiring of the rebellion. Some who have fought from the beginning have had their faith shaken as well.

Abu Sayed has fought hard for the revolution in Aleppo, his hometown. During the holy month of Ramadan in August, he fasted with a bullet hole healing in his thigh. He continued to fight, limping across sniper alleys on the front lines of the city.

Eventually his family’s apartment was overrun by the regime and he began sleeping in a mosque. Three weeks later during a mortar attack, shrapnel ripped though his neck. When he woke up, he saw his friends above him, saying, “Abu Sayed was a good man.”

When he lost consciousness again, he dreamed his 17-year-old brother, Hamdino — who was shot through the heart during an earlier protest — was holding his hand, guiding him somewhere. He brother then stopped and told Sayed he had to go back.

As Sayed recounted his near-death experience, he smoked a cigarette and tears welled in his eyes. Patches of gauze were still taped to his neck.

“You know one of the FSA leaders from Maraa?” he asked. “They go into the free area when there’s fighting in Salahhadin. I see them taking screens, computers, telephones, everything they can lay their hands on.”

He said he's seen civilians executed after rebels recklessly accuse them of being mercenaries for the regime.

“We have lost the civilians now,” he said, exhaling smoke.