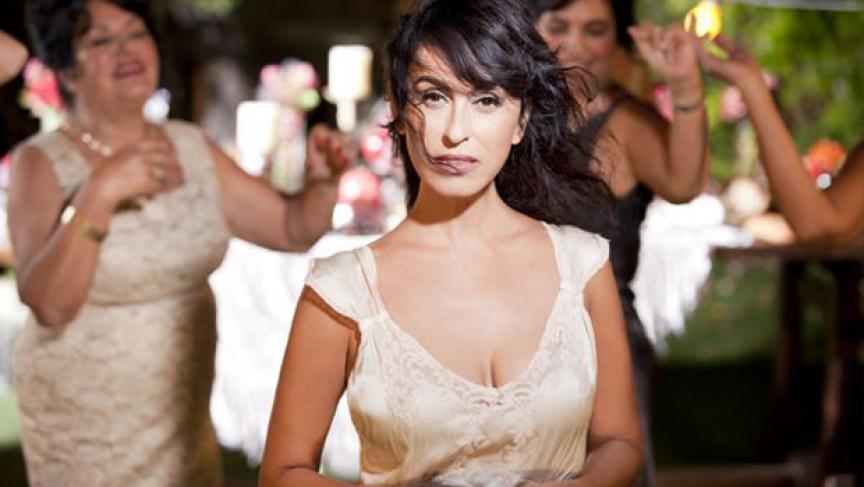 Rita Jahanforuz from her new album 'My Joys.' (Photo: rita.co.il)

Share
Like "Madonna" or "Sting," Israelis know her as just "Rita." The gold and platinum albums lining the walls of her apartment are also testament to her super stardom. Rita Hayan-Feruz Kleinstein grew up in Tehran in the 1960s, at a time when the capital of Iran had a thriving Jewish community and Iran and Israel were at peace. Musically speaking, Rita was weaned on Persian lullabies sung by her mother. "I remember her eyelashes, her huge eyes and warm voice. She used to sing for us, you know, to take the dombak, that it's a drum, and Iranian drum, and sing for us," Rita said. Rita recalls her very first public performance. It was a song about a Persian goat shepherd she sang at a family wedding. That's when she knew she wanted to be a singer. "I was 4-years old and they put me on a chair and gave me a microphone," she said. At 8, concern about anti-Semitism prompted her parents to move the family to Israel. And those old Persian songs came with them. They turned out to be a musical refuge for a homesick immigrant family. "When we came to Israel, my mother brought her records with her," Rita said. "And she used to play it and sometimes to miss Iran and you know, the place that she was born and cry a lot. And these are, you see, the records. They were small records, you know? Like, singles." From an Israeli school girl who was teased as "Parsi" or Persian, Rita went on to a storybook career. She spent her Israeli army service in a well-regarded singing troupe. She went on to top the Hebrew charts and stayed there for decades. She acted in movies and has performed for prime ministers and headlined national festivals in Israel. And then one day, she felt a burning urge to revisit her Iranian roots. The music and poetry of her parents were calling her. So, she decided to release an album in Persian, even though some Israeli friends thought it was a bad idea. "They said 'What?' You're going to make an whole album in Ahmedinejad's language? Who will listen to that?'," she said. "I said, 'First of all this is not Ahmedinejad's language. He is a very very very small point in this huge huge history and culture. And second, I don't care. I just have to do it.'" The album, released in January this year is called "My Joys" is a modern take on old Persian standards. None of the Israeli musicians who adapted the music for Rita were Iranian. As a result, it has got moments of Mediterranean and Balkan flavor. Iranians found Rita's tracks on the Internet, and started playing them on computers and in clubs and she became an underground star in her native Iran. And even though communications with Israel could tag one as a spy, Persian language fan mail started flooding into her inbox. Scrolling through her smartphone, Rita reads a message from one love-struck fan. "Dear Rita. Universe is between us and it help[s] us to send our power, love to each other. I'm living in Tehran. And I'm 42 years old. When I see the sea and the sky, and the sweet voice, I think I'm in paradise… …And this is only one of those emails." Rita has become an accidental ambassador of sorts. She extols the beauty of Persian lyrics to packed concert halls around the world. Iranian fans have written to thank her for presenting a different face of Iran to the West, especially Israel. "We know Arabic music, we know Yemen music, we know Russian music, we know all kinds of music. But we don't know Persian music."