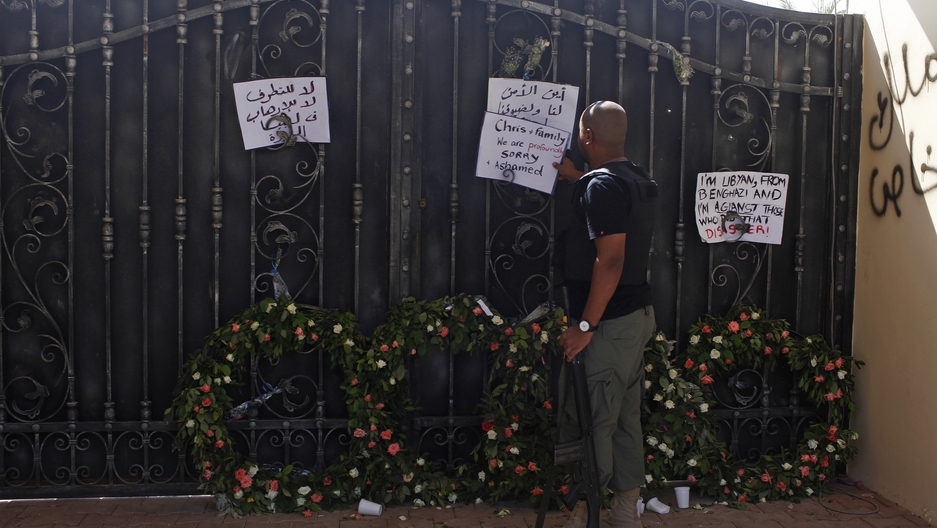 A Libyan guarding the main entrance of the U.S. Consulate in Benghazi fixes a note written by Libyans condemning the attack on the compound. ( Photo: Reuters )

Share
Many Libyans are still trying to make sense of the attack in Benghazi that happened five weeks ago Tuesday and most of the Libyans I've been talking to are contrite, and hope for continuing close relations with Washington. I spoke with Salehdin Alashhab, an oil engineer who moonlights as a cashier at his brother's grocery store in Tripoli and asked him what he would say to Americans who wonder if Washington should have helped Libya, given what happened. "Actually, there's nothing to say, just that we're very very sorry," Alashhab said. "I'm very sorry, from my heart." I also spoke with a Tripoli ad agent named Rida, who said: "The way we see it is: Obama stood by Libya. Libya messed up. And now he's getting the heat for it, basically. I don't know if that's making it too simple, but that's how we see it." Many Libyans are aware that the Benghazi attack has figured prominently in the latest presidential election debates. Heba, a Libyan freelance journalist using only her first name says a victory by Republican nominee Mitt Romney could be a major set-back for Libyan democracy. "Personally I think the Libyan-American relation could be harmed if Romney wins. He's clearly stubborn when it comes to foreign policy and he takes us back to the Bush administration kind of attitudes, which pretty much scares a lot of decision makers here in the Middle East," Heba said. "A lot of them are afraid if Romney wins, it could mean frozen relations between American and Libya."