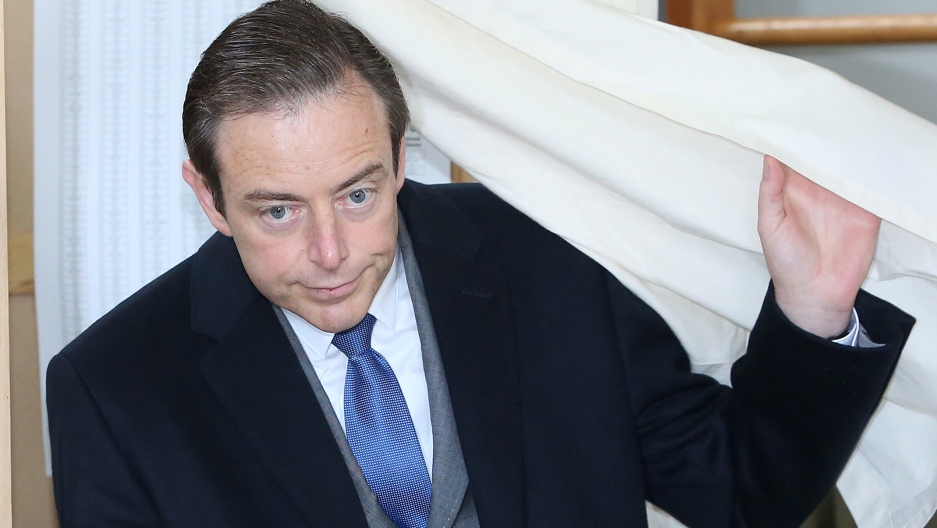 ANTWERP, Belgium — Europe's rising tide of nationalism swept over Belgium on Sunday when separatists seeking independence for the country's Dutch-speaking north surged in local elections to take power in city halls across the region.

"This is a point of no return in our history," Bart De Wever, leader of the New Flemish Alliance, told cheering supporters after his election as mayor in this historic seaport. "The Flemish have chosen change and we are going to continue on that path."

Separatists also made news in Scotland, where the first minister signed an agreement on Monday setting up a referendum on breaking away from British rule. And in Spain, the president of the Catalonia region vowed to push for the right to hold a similar vote on independence.

Supporters say citizens of historic nations are finally asserting their right to self-rule, but the resurgent separatism, combined with growing political extremism in some countries, is underscoring concerns about European stability as the continent struggles to pull out of its deepest economic crisis in decades.

"If the euro zone were to unravel in a way that destroyed the European project — and there is a risk that could happen,” Britain's Business Secretary Vince Cable warned Sunday, “the consequences would be absolutely incalculable.”

"The European project was constructed in order to rescue Europe from extreme nationalism and conflict,” he added. “There is no automatic guarantee that won't return."

British Prime Minister David Cameron traveled to the Scottish capital Edinburgh on Monday to sign the agreement allowing the Scots to hold a yes or no vote in the autumn of 2014 on whether to end the union that bound the kingdoms of England and Scotland together in 1707.

But Spanish separatists suffered a setback when the country’s parliament voted last week against granting Catalonia the right to hold a referendum. Separatist politicians say they’ll go ahead with a "public consultation" on independence if they receive a mandate in regional elections next month.

That has raised the risk of a constitutional crisis as Spain struggles to restore market confidence and climb out of a deep economic hole.

"What might happen in Catalonia is very bad news, not only for Spain, but actually for the whole of the euro zone and Europe," says Thomas Klau, senior policy fellow at the European Council on Foreign Relations.

"If the extreme scenario of a firm political demand for secession from Spain comes to pass, this would create an enormous difficulty for Spain and would further weaken investors' confidence in the euro zone political system," he said in a telephone interview from Paris.

Catalonia's independence drive is already provoking a backlash among politicians in Madrid.

The education minister wants the national government to take greater control over teaching in Catalonia to give a greater emphasis to Spanish history and language. Another leader of the ruling conservative party suggested sending the national guard to Barcelona if the Spanish constitution is threatened.

De Weveris taking a more gradual approach. He plans to use his new base in Europe's second-largest seaport to demand the replacement of the Belgian federal state — which comprises Flanders, French-speaking Wallonia and bilingual Brussels — with a loose confederation as a step toward the eventual goal of an independent Flemish republic.

His victory in Antwerp reflects long-standing discontentment among Belgium's 6 million Flemings about the use of taxes from their wealthy region to subsidize Belgium's 4.5 million French speakers.

The situation is mirrored in Spain, where Catalans blame tax transfers to poorer parts of the country for pushing their region toward bankruptcy. It’s also echoed within the wider European context by those in Germany, Finland and the Netherlands who are reluctant to transfer funds to hard-up southern countries.

"Your high-tax government has no majority in Flanders and is not backed by the Flemish," De Wever declared in a message to Prime Minister Elio di Rupo, a French-speaking Socialist.

On the streets of Antwerp, Flemings out shopping on the eve of the election offered little hope for the future of the country that was founded in the 1830s.

"We can stay related with the French people, but more apart from them," pensioner Ilse Swaab said. "All the newspapers say Flanders gives a lot of money to the French part of Belgium. We are normally a hard working people in Flanders, and they say it's not like that in the other part of Belgium."

Beautician Karen Van Noten supports independence. "There are a lot of people in Flanders and we should have our own life," she said. "Flemish people are better."

Beyond their impact on Europe's economic efforts, EU officials are concerned the separatist demands could create messy border disputes.

Flemish nationalists claim Brussels as their capital even though its population is overwhelmingly French-speaking. Some Catalan separatists envision their future republic stretching beyond the current region’s borders to include other bits of Spain and even France.

The threat separatism may revive in parts of Eastern Europe — among Hungarians in Romania's Transylvania region, for example — could pose even trickier problems.

Despite the risks, the EU's head office has been unable to take a clear-cut position on the prospects of states breaking up.

Justice Commissioner Vivianne Reding recently suggested that Catalonia would not need to leave the EU if it were to break away from Spain, contradicting earlier comments by a European Commission spokesman who said any new breakaway states would have to re-apply for EU membership.

Commission spokeswoman Pia Ahrenkilde Hansen said on Monday that the EU executive body will keep quiet on the issue unless formally requested by a national government to make a pronouncement.