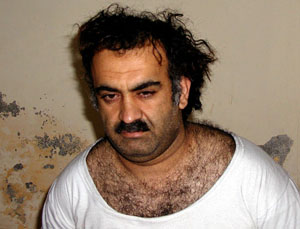 Khalid Sheikh Mohammed was captured by U.S. forces in 2003 and tortured. He's on trial now for his role in the Sept. 11 terrorist attacks. (Photo courtesy of the U.S. Department of Defense, via Wikimedia Commons.)

Brig. Gen. Mark Martins is the lead prosecutor in the Khalid Sheikh Mohammed trial — but he also helped lead the task force that reformed the military commissions in 2009.

He says there have been a number of important improvements since then, but one topped the list.

“First and most important was the prohibition, in black and white, of the use of statements derived from cruel, inhuman degrading treatment,” Martins said.

Mohammed is back in court Monday, facing charges for his role in the Sept. 11 terrorist attacks. Andrea Prasow, senior counterterrorism counsel for Human Rights Watch, acknowledges the progress — but says it's tempered.

Get updates on the hearing's progress at TheWorld.org.

“There are two giant loopholes that you can drive a truck through,” she said. “The first is that so-called derivative evidence — not the direct evidence obtained by torture but evidence one step removed that would be barred in a U.S. federal court is expressly permitted in a military commission. I think that’s one really shocking area it’s clear where evidence knowingly obtained by torture can still be admitted.”

Prasow says the other big problem is the secrecy that pervades the terrorism cases at Guantanamo. While it’s certain that Mohammed’s statements from his waterboarding sessions won’t be admissible, Prasow worries that the secrecy rules can make it hard to trace just what information was obtained through torture.

Once the new military commission rules were in place, the government sent so-called "clean teams" to get new statements from detainees like Mohammed. But defense lawyers will argue any testimony obtained now is still tainted by torture — “fruit from the poisoned tree” to use one description.

In these new, more open proceedings, the defense lawyers may win that fight. But even with the most rigorous new rules, critics like Prasow say that military commissions, by their very nature, will never be seen as fair.

“The prosecutors, defense, primarily are military officers,” she said. "You have a military judge, military jury pool, hand-picked by the same person who chose the judge, it’s just really ridiculous. The system is so clearly not independent. The fact is that around the world military commissions are perceived as illegitimate.”

Martins says he’s acutely aware of the need to establish the legitimacy of the proceedings for a wider public.

“Every day I’m trying to fulfill the role of public prosecutor, which is someone who’s trying to achieve justice, not just win at all cost,” he said. “I’m trying to ensured the law is applied, trying to ensure that (this is) something that we can all look at and see as justice.”

Gary Solis, a professor at Georgetown and an authority on law and warfare, says previous commissions and the treatment of detainees have created an unbearable burden for the new courts.

“They are so hobbled by a history that they, in my opinion, cannot work in a way which will be understood or appreciated outside of their courtroom,” he said.

It may have come to a point where no one is happy with the military commissions — even those who thought that a Federal trial wouldn’t be tough enough. During his arraignment at Guantanamo in May, Mohammed’s behavior horrified and angered many Americans. He and his co-defendants disrupted the proceedings multiple times, laughing and smiling through it all.

Solis says the military judges are in an impossible position.

“They know the world’s eyes are on them, so that they will allow Khalid Sheikh Mohammed to make a circus of it whereas up in federal court — well, a couple of the judges I’m familiar with there wouldn’t put up with that stuff for a minute,” he said.

Had Mohammed’s federal trial been allowed to proceed, he would almost certainly have been convicted by now, and be on Federal death row. Instead, he is at the center of a long, drawn out military commission that has become a forum for critics of his treatment to have their day in court, and for Mohammed himself to air his grievances with America.