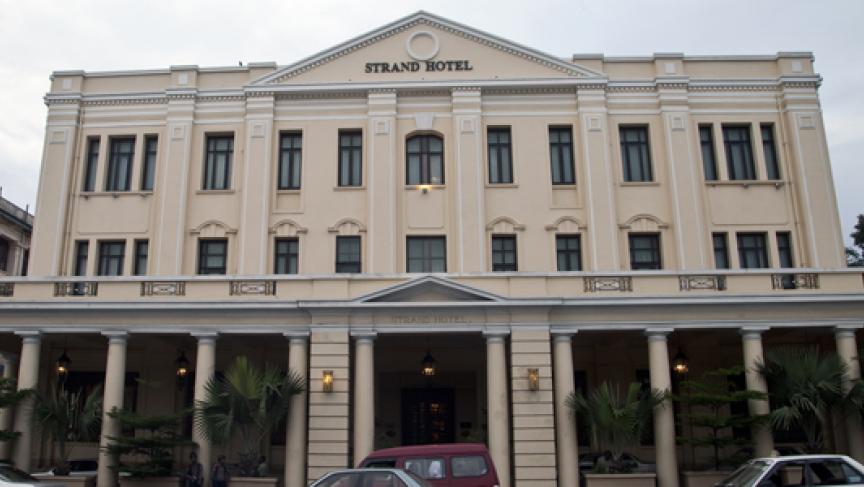 When it opened in 1901, the Strand hotel was considered some of the finest accommodation in Asia. After falling into disrepair, its grandeur was restored in the 90s and its a model of successful preservation. (Photo: Brendan Brady)

Share
Myanmar is emerging from decades of repression and international isolation. The one-time military government has enacted democratic reforms, and the U.S. and others have responded by suspending sanctions. Now the country also known as Burma is viewed as a promising frontier economy. But there's a downside. A rush of foreign investment could imperil Yangon's collection of colonial-era buildings, an emblem of a time when the city was a cosmopolitan hub in the English empire. The generals who ruled Myanmar since the 1960s isolated the country and drove its economy into the ground. Being stuck in time has been a curse for Myanmar's people, among the poorest in Asia. But it's also had the unforeseen effect of preserving hundreds of ornate buildings from the 19th and early 20th century. "This building is very interesting. I'll bring you upstairs. I really preserve the brickwork up there," says Sun Oo, a Yangon architect. He takes me through a Victorian-era building that he renovated to house his architectural firm. "These are original steel trusses," he says. "This kind of steel is just recently introduced to Myanmar at that time." Sun Oo says for a long time, many Burmese people viewed these buildings as a vestige of British imperialism. "But nowadays, I think, the majority, they accept and they realize that these colonial buildings are part of our cultural heritage." Most of the buildings, though, are in bad shape. Many are vacant and they sit in prime downtown locations. Now that Myanmar is no longer off-limits to Western investors, demand for downtown real estate is expected to surge, and Sun Oo worries what that might mean. "The developer needs to respect and treasure the existing building. It's a very important artifact for our culture," he says. Sun Oo is part of a group of architects, historians and businessmen called the Yangon Heritage Trust, which is lobbying to get protected heritage status for Yangon's historic structures. "I'm so worried that a lot of investors will come in bringing a very thick book of new project proposals, and the central government or the regional government will say, 'Wow, that's great,'" says Oo. He fears the government will let developers knock down Yangon's historic buildings and replace them with incongruous malls and office towers. It happened before in other cities in Asia. But Yangon does have one model for successful preservation. The Strand Hotel was built along Yangon's waterfront in 1901. Its marble floors and glass-paneled doors made it one of Asia's finest hotels at the time. After the military seized power, the hotel fell into disrepair. But in the 1990s, an international hotel group came in and restored its luster. The hotel bar used to serve drinks to Rudyard Kipling, George Orwell and other members of the city's colonial elite. Today, it offers old-fashioned cocktails for well-heeled tourists, mostly from Europe and the U.S. "The Strand Hotel is the first preservation project in Myanmar," says Damon Zumbroegel, an American architect who's lived in Myanmar for several years. He's also a member of the Yangon Heritage Trust. "It's basically what everybody could look at right now and say this is what could happen if you took an old colonial building and you modified it for the modern times." It not only preserves history, it sells it very well. "Now the Strand is full every night and it's the most expensive hotel in town, and I'm sure it's highly profitable." The old buildings' commercial value is a good selling point. But Thant Myint-U, the founder of the Heritage Trust, says his project is ultimately about preserving valuable history. "It's about preserving a cityscape that's been around for 150 years and it's been central to the history of this country," he says, "and it's the place in which the Myanmar people first learned to be modern, to interact with the rest of the world." Burmese were often treated as second-class citizens by the ruling British. But many here still see those years as a better than the military dictatorship that followed. The owner of a Yangon coffee shop tells me people here value having the country's history imprinted on the city as a reminder of their past. "By looking at these buildings, we know who came into our country and what happened," he says. "Without them, how can we know our history?"