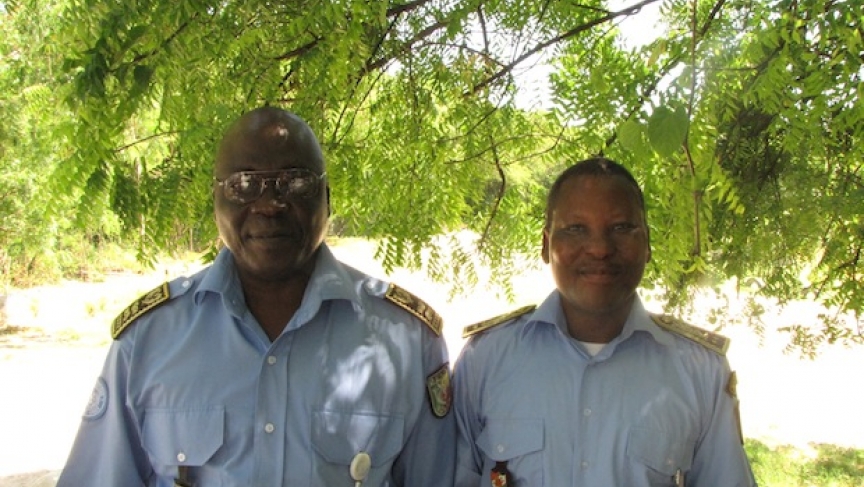 Share
The African Union has 54 member states. All of them are located on the African continent. But as early as January, this could change. Haiti might be en route to becoming the first country to join the African Union that isn't actually African… or is it? UN police officers are taking a break outside their office at the police academy in Port-au-Prince. Mian Georges, of Benin, is among the thousands of UN personnel from Europe, the Americas, Asia, and Africa, who've participated in missions in Haiti in recent decades. But Georges says for Africans, the connection to Haiti is unique. "We are practically connected by umbilical cord to Haiti," he says. "Our histories are common. Our cultures too. When I came to Haiti, it was basically the same food… I feel like I'm back home in Africa." And Georges' country, Benin, has a special link with Haiti. It was a Beninois, Toussaint Louverture, who led Haiti's successful rebellion against the French at the end of the 18th century. That established Haiti as a symbol of black independence. So to many Africans and Haitians, the idea of Haiti becoming a member of the African Union seems natural. Last July, at the African Union summit in Addis Ababa, Ethiopia, Haiti's communication minister Ady Jean-Gardy moved to make it official. "We're already in the Organization of American States," he says. "We have a representative at the European Union, and we think we should be in the African Union." Jean-Gardy an AU membership could lead to economic exchanges geared toward development, and inclusion in African trading blocs. The AU postponed a decision on Haiti's inclusion in the union until January 2013. But Africa appears poised to let Haiti into the fold. "We have always been advocates for Haiti, throughout Africa," he says. Babacar M'Bow is from Senegal. He's a cultural consultant with a focus on Haiti. And he's been pushing for Haiti to be let into the AU. "Our parents were advocates for Haiti," he says, "so we inherited this charge." To many Africans, there is a sense of indebtedness to Haiti because Haiti has been an advocate for Africa. When Haiti was the only black member of the United Nations, it pushed for the liberation of Africa from colonial rule. Haiti also enjoys a level of prestige in African countries that it doesn't have closer to home. Babacar M'Bow says he grew up in Senegal surrounded by Haitian professors and artists. And the Democratic Republic of Congo has welcomed waves of Haitian professionals. Jean-Junior Joseph served as communications chief for Haiti's prime minister a few years ago. Then he went to Congo for a similar position. He says, "The prime minister spoke to me on different occasions, and said, 'what can we do for you?' They always think we belong to them. They think, 'well they shipped you over there. Now come back to us.'" After the 2010 earthquake, the Democratic Republic of Congo, aid dependent itself, pledged to donate 2.5 million dollars to Haiti. And Senegal's president flew 150 Haitian students to Dakar to attend university for free there. Small-scale exchanges have also been happening. Earlier this year, Port-au-Prince resident Baudeler Magloire flew to Benin on a National Geographic travel grant to share his expertise in composting toilets with organizations there. And he was struck by how connected people there seemed to feel to his country. He says, "When I said I was Haitian, they said, 'Yeah, Haitians are our brothers.' Most people know the history of Haiti, they learn it in school, and there are people who worked in Haiti.'" And while many here in Haiti believe their country is essentially African, their understanding of what Africa is is more complicated. To some, it is where they go after they die. Others think it is a single country. And it gets worse in some circles, according to M'Bow, who visits Haiti often. "Most Haitians are ignorant of Africa," he says. "If you want to insult somebody, you will call him an African, 'Look at an African!'… it is a derogatory term, and it highlights that ignorance… So there is work to be done." M'Bow says there's also work to be done if Haiti wants to joint the AU. "If Haiti is a member of the African Union," he says, "all bets are off. Haiti is subject to analysis and criticism as any other member state of the union." In other words, the Haiti-Africa relationship would have to develop beyond symbolism and shared history.