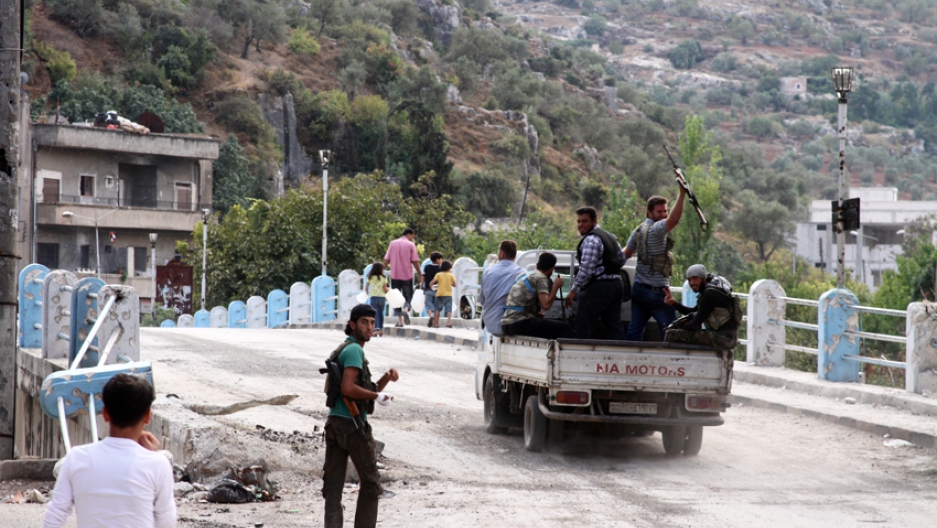 AZMARIN, Syria – In Hacipasa, Turkey, citizens fear repercussions as their country gets drawn ever closer into Syria’s conflict which rages across the border just a few kilometers away. But on the Syrian side of the border, survival is the only thing on the minds of most Syrian families.

Houses and government buildings in the town of Azmarin still smoldered Saturday morning from a four-day battle between government and opposition forces. Bodies still lay in the streets. A prisoner, hands tied behind his back, was led through the street by a group of opposition fighters. One man threw water in his face as the terrified captive marched forward.
For three days, rebels had surrounded the town before launching a full-scale attack on Friday. Remaining government soldiers fled during the night, some across the Turkish border and into Turkish custody.
By Saturday afternoon, the families of rebel fighters that had fled to neighboring villages began trickling back to see what remained of their homes.
“This was Captain Shardi, a three star commander in Assad’s army,” said the town's rebel commander Dr. Hassan Ghnnam as he pointed to the body of a hefty man in a blood-stained army uniform that lay in a side street. “He burned many houses in this town. The people were so afraid of him.”
Dr. Ghnnam worked as a urologist in Azmarin before taking command of rebel forces in the town.
The nearby city of Darkush was in a similar state. The area has no power or running water. Supplies are running low and the cities' few remaining residents are in constant fear of attack by government aircraft since rebels took the city on Thursday.
Pharmacist Yazan Labwi said he and three companions were forced to abandon their vehicle when a helicopter opened fire on them Thursday afternoon.
“We were bringing bread to people here in Darkush. You can see we are unarmed and we wear civilian clothes,” he said pointing to his dirt-stained clothes when he reached Darkush shortly after the attack. “We hid under the olive trees. We could hear the bullets hitting the ground next to us, then a large explosion on our right. We ran for about 1 kilometer under the cover of trees. I really believed I was about to die.”
Several months ago, the town was vibrant and full of life as residents dined by the riverside and children swam in the turquoise waters. As war reached this historical town, most of the residents have fled to neighboring villages or across the border.
The remaining residents blame the government forces for the destruction. Fathia Isadeen was at home with her son and grandchildren when she says government soldiers set fire to their home.
“They bombed all the houses first and then they came through and burned everything,” she said as the blackened house still smoldered around her generating a suffocating. “There were many, many soldiers. We ran upstairs and hid so they set the fire underneath us.”
Next door, Yazan Labwi reentered his home for the first time in weeks. The house was heavily looted, the door-locks blown in by gunfire. A safe lay open on the floor, also opened by gunfire. The family’s possessions lay strewn across the floor.
“At least the TV is safe,” he said with a dry laugh as he entered his ransacked living room. Photos of his two daughters, aged 2 and 4, still hung on the wall above the mess.
Outside, the streets erupted in a panic as a call came in that government soldiers were returning. The long queue for bread that stretched several blocks dispersed. A young boy collapsed and was brought inside to Labwi.
“He has not eaten in several days,” said the pharmacist after reviving the boy with water and handing him a piece of bread.
Back in Azmarin, Dr. Ghnnam spoke with pride and optimism over the recent victory.
“These cities were a barrier, but now we have liberated all the area except Sarlkeen and Hareem. Now we have a plan to restore the city and bring the civilians back before we move on to free another area,” he said.
For the past three days, bombs and tank blasts could be seen and heard hitting the hilltop city from rebel positions, but Dr. Ghnnam insisted the damage that could be seen throughout the city, including damage to government buildings, was only inflicted by government forces. He added that no prisoner had been taken in the battle but all government forces where permitted to escape unharmed after their withdrawal.
Across the river on the Turkish side, opposition forces confirmed they had captured 25 prisoners from the battle. Ten had been handed to Turkish authorities and 15 were being held on the Syrian side. A further 20 were rumored to have been captured by Turkish authorities on Sunday, but this could not be confirmed.