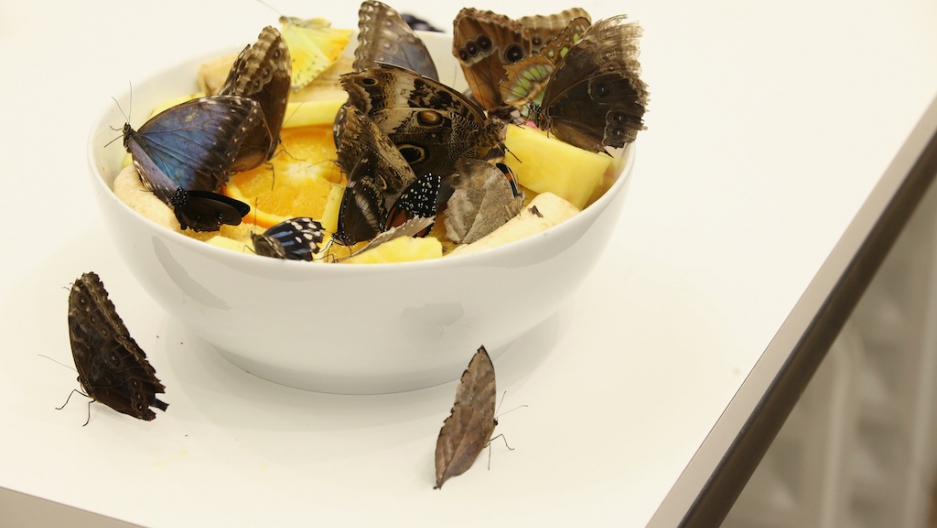 Live butterflies sit in a bowl of fruit in an installation 'In and Out of Love' by Damien Hirst in the Tate Modern art gallery on April 2, 2012 in London, England. The Tate Modern is displaying the first major exhibition of Damien Hirst's artworks in the UK, bringing together the collection over 70 of Hirst's works spanning three decades.
Credit: Oli Scarf
Share

Damien Hirst is widely known for his art, but lately, he is getting attention for his butterfly slaying.

Hirst has come under fire from the RSPCA over his latest exhibition at the Tate Modern in London titled "In and Out of Love," which was comprised of two windowless rooms full of live butterflies eating fruit, being born, and yes, dying.

It was estimated that around 9,000 butterflies died over the course of the 23-week exhibition, with 400 new butterflies introduced to the rooms every week, the Telegraph reported.

"In this so-called 'art exhibition' butterflies are being forced to exist in the artificial environment of a closed room for their entire lives," the RSPCA said in a statement, Channel 4 reported.

"There would be national outcry if such an exhibition involved any other animal - such as a dog. Just because it is butterflies we are talking about here, doesn't mean they don't deserve to be treated with kindness," they continued.

More from GlobalPost: One-stop art shopping for the megarich

A Tate spokesperson defended Hirst's work, which was highly praised by critics when it debuted.

“The butterflies used in this [Hirst] work were all sourced from reputable UK butterfly houses and were selected from varieties known to thrive in the conditions created," the spokesperson told the Telegraph.

“The butterflies lived out the final stage of their natural life cycle inside this room. Approximately 400 butterflies were introduced to the exhibition over the course of each week, with many enjoying longer life spans than in the wild due to the high quality of this environment," they added.

Hirst is no stranger to using animals both dead and alive in his work: among his most notable pieces are a 140-foot tiger shark immersed in formaldehyde, a cow and a calf sliced in half and displayed in tanks (which garnered the Turner Prize in 1995), and a work called "Let's Eat Outdoors," thousands of flies chomping on abandoned barbecued meat in a box, the Daily Mail reported.