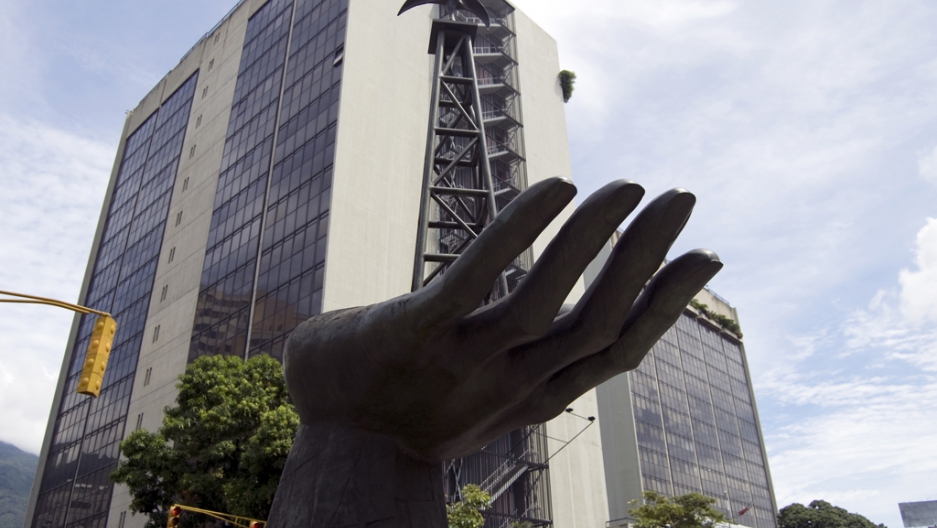 A statue of a hand with an oil drilling rig out front of Venezuela's state oil company PDVSA.
Credit: Jorge Santos
Share

LIMA, Peru — Sitting atop the world’s largest oil reserves and vociferously advocating for his “Bolivarian” brand of socialist revolution, Hugo Chavez’s re-election as president of Venezuela has implications that stretch far beyond his country’s borders.

One of the United States’ most outspoken critics, “el Comandante” is now set to continue his role as a thorn in Washington’s side — whoever is in the White House — while using Venezuelan crude and the petrodollars it earns to push his radical agenda across Latin America.

Chavez’s largesse with his nation’s oil bounty — 297 billion barrels of proven reserves, according to oil producers’ group OPEC — means that a host of his left-wing allies in the region are now sighing in relief.

They include the members of Petrocaribe, a club of small Latin American and Caribbean countries founded by Chavez in 2005, which buy Venezuelan hydrocarbons on preferential terms.

Some pay as little as 5 percent upfront and just 1 percent interest on the remainder, which can be paid over periods of up to 25 years.

For many Petrocaribe members, particularly Nicaragua and Cuba, the cheap oil has provided a lifeline for spluttering economies that could not afford to consume similar volumes of fuel at market rates.

More on Venezuela's vote: Chavez re-election: the view from Cuba

Within 24 hours of the result, he told CNN en Espanol that he was seeking a meeting with Chavez, 58, to discuss Guatemala joining Petrocaribe.

That news represents a cold shower for the US State Department as an ally in the region appears set to become dependent on cheap Venezuelan oil.

But perhaps most importantly for Washington is the continued flow of Venezuelan oil to the US.

The South American nation is the United States’ fourth-largest foreign source of oil. Last year, the US imported 951,000 barrels of oil daily from Venezuela, representing just over 8 percent of US consumption, according to the Energy Information Administration.

The US economy would be massively disrupted were Chavez to turn off the spigot. However, despite the strong antagonism between Washington and Caracas, such a scenario remains unlikely — at least in the medium term.

If America is addicted to Venezuelan oil, then Caracas is even more dependent on selling that crude to the US market, which currently consumes 40 percent of Venezuela’s oil exports, according to the EIA. The South American country's total oil exports generate more than 90 percent of government revenues.

Venezuela even has stakes in refineries in the US, while gas station chain Citgo is a subsidiary of Venezuela’s state-owned oil firm Petroleos de Venezuela SA, or PDVSA.

Venezuelan oil, however, is unusually heavy and “sour,” meaning it can only be processed by specialized refineries, such as those operating in Texas and Louisiana. Sending that oil to China instead, as Chavez would prefer, is something that cannot happen overnight.

So, even as Washington and Caracas maintain their antagonistic posturing, any immediate spillover into the serious matter of energy policy seems unlikely.

More on Venezuela's vote: What it will mean for Washington

In fact, there has even been something of a rhetorical thaw between the Chavez and Obama administrations recently.

El Comandante said last month that the US president is "a good guy" and that if Chavez were a US citizen he would vote for Obama — a surprising endorsement from a man who once deemed Obama the "shame" of Africans. His glowing remarks likely targeted Venezuelan moderate or undecided voters in Chavez's toughest re-election race to date.

Meanwhile, Obama has stated that he does not regard Venezuela under Chavez as a threat to US national security.

But what could shake things up far more than the elections in Venezuela is the little matter of the US’ Nov. 6 vote, with Republicans taking a seriously hawkish tone.

“In the last three years, Venezuela has become a narco-terrorist state, turning it into an Iranian outpost in the Western hemisphere,” says the 2012 Republican Platform.

Were Romney to become president, the big question would be whether he would follow that campaign rhetoric with equally tough actions — or would he also continue the Obama administration’s policy of containing Chavez while keeping the oil flowing?

Triumph for leftists, but which ones?

With a few notable exceptions — Chile, Colombia and Mexico — the region is ruled almost exclusively by leftist governments.

However, most experts lump those governments into two broad categories: a moderate, market-friendly left that respects basic democratic principles such as press freedom and judicial independence, and a harder, authoritarian brand intolerant of dissent and volubly antagonistic toward the US.

Those were the alternatives facing Venezuelans on Oct. 7. Henrique Capriles, the challenger who ultimately lost to Chavez, had vowed, for example, to end Chavez’s alleged practice of linking welfare payments to party membership.

He also planned to move Venezuela away from its friendships with Cuba, Iran and Russia, claiming that under him Caracas would align itself with “democracies.”

But those plans are all on hold, as Chavez embarks on his new six-year term. If he sees it out — and the president has yet to reveal the clinical details of the pelvic cancer that has forced him to fly to Cuba for surgery three times in the last 12 months — he will have been in power for exactly two decades.

And with his renewed mandate, Chavez is expected to deepen his “Bolivarian” revolution — named after Simon Bolivar, the hero of Latin America’s 19th century independence movement from Spain — which trumpets a raft of socialist policies including nationalizations and massive handouts for the poor.

A brief taste of that came at a press conference the day after the elections, with Chavez describing Bashar al-Assad, the dictator whose desperate clinging to power has unleashed a bloodbath in Syria, as his country’s “legitimate” leader.

More from GlobalPost: Bullet to ballot — Today's Latin American strongmen hold onto power at the polls

Or, as progressive columnist Marco Sifuentes put it in the Peruvian paper La Republica: “Latin America is not divided between rights and lefts, black and white, but in democratic shades and authoritarian shades."

Sifuentes continued, “Between those who may not be perfect but guarantee a minimum of freedom to be able to decide where we are going, and those who believe they are perfect and have already decided that we are going with them.”

Chavez’s win, at least in the short term, appears to have strengthened the latter’s hand and put Latin America’s difficult ongoing process of democratization on ice.