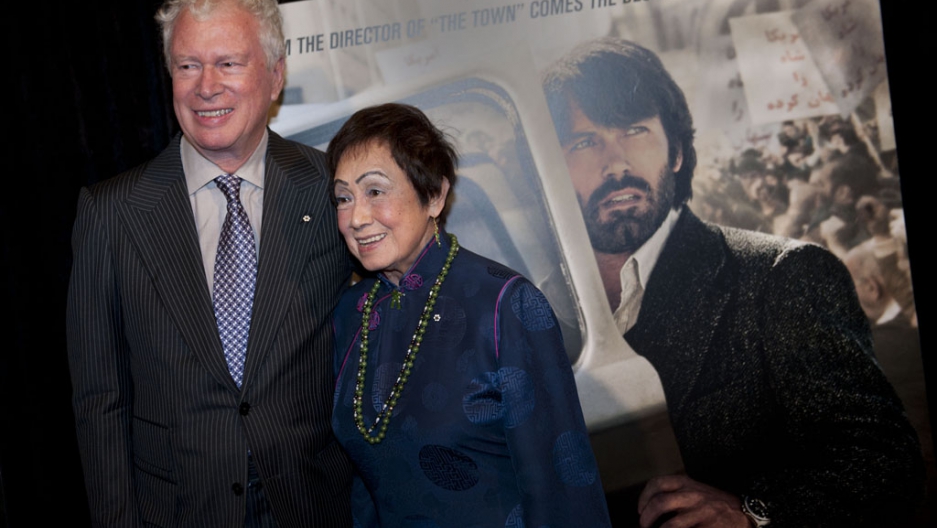 No, the CBC did not make its own dramatic version of the 1979 Iran hostage crisis, and Warner Bros didn’t release it north of the 49th parallel with a goofy title.

It’s the same story with the same people; it’s just that Canadians remember those events from the viewpoint of diplomat Ken Taylor, a near national hero.

Affleck’s movie, which opened this weekend, has ruffled a few Canadian feathers since it framed Canada’s involvement as mere subterfuge in a CIA master plan.

To his credit, Affleck apologized to Taylor and tried to make things right. More on that later.

Here’s what both sides agree upon: when Iranian students stormed the US embassy and took 90 Americans hostage, six escaped.

After frantically searching for refuge, they landed at Taylor’s house in Tehran.

Taylor was Canada’s ambassador to Iran and worked alongside the CIA gathering intelligence, so he was a known entity to the Americans.

However, Taylor couldn’t just drive his six American “house guests” to the airport with anti-American sentiment rampant, so the CIA and agent Tony Mendez hatched a scheme to free them.

They were to pose as Canadian filmmakers scouting locations for a new sci-fi movie called “Argo,” then slip out of Iran using Canadian passports.

That’s where everything goes off the rails.

Affleck’s screenplay is based on Mendez’s book “Argo: How the CIA and Hollywood Pulled off the Most Audacious Rescue in History,” and the movie puts Mendez at the center of the action with Taylor a supporting character.

If you talk to the average Canadian, Taylor, his wife and embassy staff risked life and limb to help free the Americans.

“The CIA certainly played a crucial role and that was never denied,” Taylor said in an Ottawa Citizen article.

“The distortion is the idea that it handled the escape in its entirety.”

If you watch the movie, the CIA allowed Canada to take some credit for the rescue so Iran wouldn’t get mad.

The trouble today began in Canada when “Argo” premiered at the Toronto International Film Festival in September.

At the end of the movie, a postscript tells viewers that Taylor received “112 resolutions and proclamations” for heroism, with an obvious “wink, wink, nudge, nudge” that he didn’t deserve them.

Word leaked to Affleck that Taylor (not invited to the premier) and his friends were a little miffed at the revisionist history.

“I don’t focus my views on my own involvement,” Taylor told the Calgary Herald. “The entire Canadian Embassy was at play. I don’t think it gives credit to Canada. And I made that pretty clear, I think.”

The ending to “Argo” spawned neither lawsuits nor diplomatic fissures. Canadians, after all, are a forgiving bunch.

That didn’t stop Affleck from reaching out to Taylor, and the movie’s star and director invited the Taylors to Hollywood for a private screening.

“I love Ken,” Affleck told the Toronto Star. “I already had so much respect for him before we met. He is a class act.”

He also asked Taylor to rewrite the postscript.

It now reads as follows, “The involvement of the CIA complemented efforts of the Canadian embassy to free the six held in Tehran. To this day the story stands as an enduring model of international co-operation between governments.”

That, we can all agree, is fittingly Canadian.