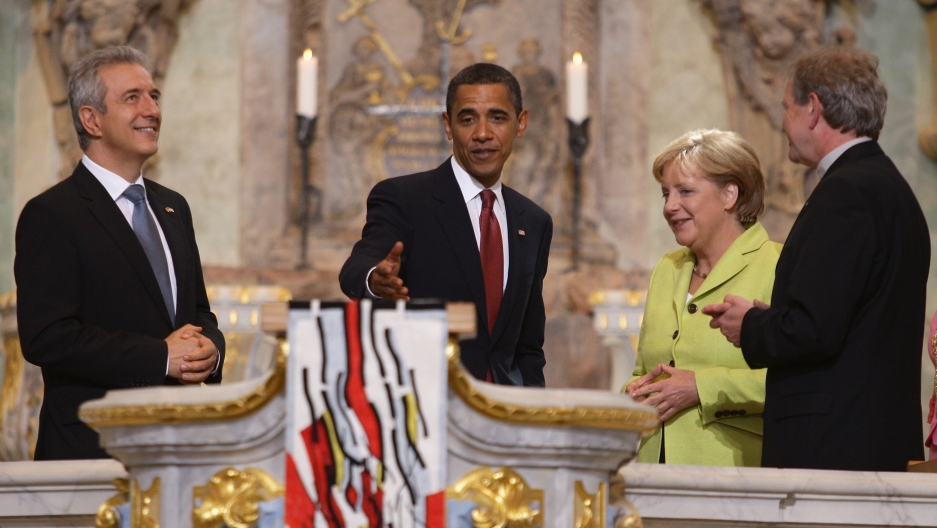 Barack Obama in Germany. Although opinions of the United States have improved dramatically under his presidency, they have recently begun to slip.
Credit: Andreas Rentz
Share

LONDON, UK — When Barack Obama addressed 200,000 cheering spectators in Berlin four years ago, his vow to “remake the world once again” marked a turning point in European attitudes toward the United States.

European allies uneasy about George W. Bush’s “war on terror” welcomed the Democratic presidential candidate as the herald of a new chapter in which American values would fall closer into step with the old continent’s liberal mores.

Since then, however, the twin upheavals of the Arab Spring and global financial crisis have placed fresh strains on trans-Atlantic relations and raised serious questions about the relevance of US policies and power to Europe.

As Obama prepares to make up for his recent debate flop against Republican opponent Mitt Romney, he’s no doubt hoping the switch to foreign policy topics will put him on firmer ground.

But does his country still generate the European favor he seemed to rekindle in 2008? Or is America increasingly viewed as a country that, as Obama described it in Berlin, “has not perfected itself?”

More from GlobalPost: What if the world could vote in the US election?

Much of the transformation of the last four years has taken place inside Europe. The euro zone debt crisis has threatened to tear apart the continent’s powerful economic union and ushered in a new period of austerity and introspection that has overshadowed interest in affairs beyond its borders.

The crisis has swept away many of the political leaders who once jostled to shake Obama’s hand and bask in his reflected glory — among them France’s Nicolas Sarkozy, Britain’s Gordon Brown and Italy’s Silvio Berlusconi.

While Obama’s popularity at home heavily depends on economic performance, his international reputation is inextricably linked to the fates of the military interventions he’s sustained, and especially the consequences of the US use of drones.

Although figures published earlier this year by the Pew Research Center point to a considerable rise in European support for the United States and its policies compared to four years ago, they also show a recent dip.

Britons favoring the United States increased from 53 percent to 60 percent during Obama’s presidency. It’s a similar picture in Germany, where the number rose from 31 to 52 percent. In  Spain, it climbed from 33 to 58 percent and in Italy, from 53 percent in 2007 to 74 percent today.

An unscientific survey of opinions from the streets reflects shifting attitudes

Mark Millman, a 41-year-old London-based accountant, said Obama was “a big deal, a breath of fresh air” in 2008. “He couldn’t do much worse than Bush, and I don’t think he has,” he said. “But now we’ve got much more to worry about at home than what’s happening in the States.”

However, Millman added, “America still doesn’t seem to be getting it right” in Afghanistan. “Obviously they’re not carting people off to Guantanamo any more,” he said, “but civilians are still getting killed and there’s still anger. Mind you, Britain isn’t much better.”

More from GlobalPost: What if Britons could vote in the US election?

Britain’s Conservative Prime Minister David Cameron has generated political capital from strengthening the so-called special relationship between London and Washington while also benefitting from a backlash against Labour party rivals who closely allied themselves with Bush.

But as Cameron’s popularity dwindles thanks to harsh austerity measures, so too will support for US policies seen as linked to his fortunes. American military missteps in Afghanistan also risk further undermining positive feeling for the United States as long as British troops are fighting in the conflict.

Year-by-year statistics compiled by Pew reveal a recent cooling off. Germany’s score has dropped 10 points from its 2011 peak of 62 percent while Spain fell by six points.

Carmen Maria Fernandez, a Spanish student studying in London, points to a financial factor. “Everyone in Spain is obsessed with the economy and unemployment at the moment,” she said, “so it’s hard to care about America.”

More from GlobalPost: What if Germans could vote in the US election?

Although Pew showed general European support for the US-led fight against terrorism — another turnaround from the Bush years — it also reported widespread opposition to the use of drone-launched missile strikes against extremists.

French statistics have been especially volatile. Former President Jacques Chirac emerged as a vehement opponent to the invasion of Iraq at the height of Bush’s popularity. By 2008, favorable views about the United States were languishing at 42 percent.

Opinion changed under Sarkozy, who succeeded Chirac in 2007. He made France a full NATO member after relations with the alliance had eroded during the Iraq conflict. By the time France helped lead NATO’s enforcement of a no-fly zone over Libya in 2011, US favorability had surged to 75 percent.

Some called Sarkozy “Le Americain” for his trans-Atlantic fervor. But he was voted out last spring in favor of Francois Hollande, a socialist whose victory was largely credited to his efforts to distance himself from his predecessor.

Pro-US sentiment has already dropped to 69 percent on Pew’s chart since Hollande took office in May, perhaps influenced by doubts over Hollande’s ongoing commitments to NATO and reservations over a US-led missile-defense shield program.

Despite the latest trend, however, it’s clear few Europeans want Obama to lose the election next month, especially after a gaffe-strewn European tour Romney made in July.

He caused outrage in Britain by questioning the country’s preparedness for the London Olympics. In Poland, he caused embarrassment by accepting the support of trade union hero Lech Walesa despite his opposition to union activity at home.

“God help us all if Romney gets in,” said Colleen McGuinness, a London-based Irish citizen. “From the look of him, he’s another George W. waiting to happen. We’ll be up to our necks in more idiotic wars before we’ve had chance to catch our breath.”

More from GlobalPost: Russians back a second term for Obama