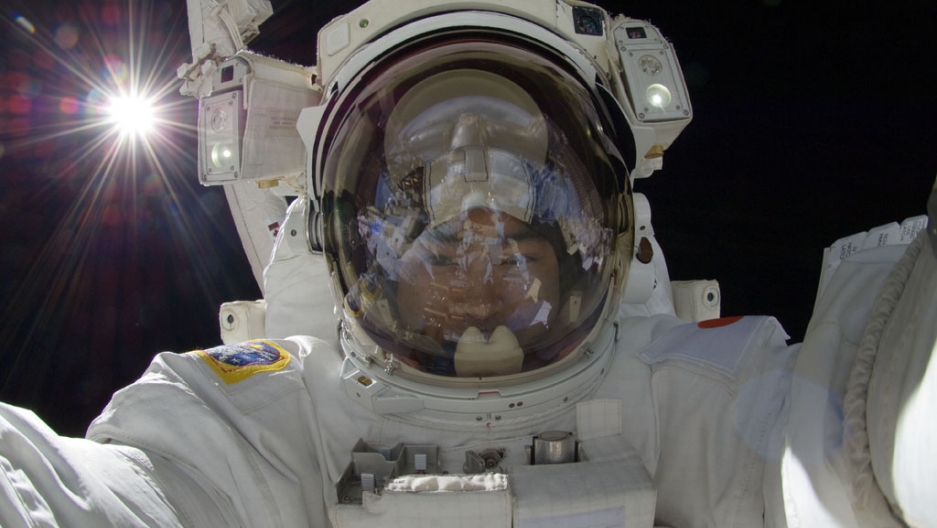 In this handout from NASA, Japan Aerospace Exploration Agency astronaut Aki Hoshide participates in a mission outside the International Space Station on September 5, 2012.
Credit: NASA
Share

Wow, did I ever make a mistake volunteering to write this story.

It sounded cute at first; researchers led by Silas R. Beane at University of Bonn in Germany say that they are trying to learn if our universe is just a computer simulation.

Of course, my writer-ly brain immediately jumps to images of leather duster-clad Keanu Reeves, Laurence Fishburne and Carrie-Anne Moss in “The Matrix.”

That’s followed by that scene at the end of “Men in Black” where Will Smith closes his locker and we realize our universe is just the center of some space alien marble.

This, of course, would not be the first time my writer’s brain has let me down when it comes to science (as every high school teacher I’ve ever had can attest).

Okay, so here goes the best bad explanation I can give you: physics is built, in part, upon something called quantum chromodynamics.

Quantum chromodynamics tries to explain how the universe operates at its very smallest, most essential levels.

And, as physicists and scientists are wont to do, they have tried to learn more about quantum chromodynamics by simulating it on a computer.

However, when you simulate quantum chromodynamics, you’re essentially simulating the universe itself, Technology Review says.

Right now, the limits are so tight and the results so small, that our measely supercomputers are just scratching the surface.

However, from what I gather, that means if our computers could become powerful enough, we could actually create a universe.

Therein lies more questions, though, and the smart people in our world ask this: “What if WE are just operating on some alien supercomputer? Could we run some tests to find out?”

Apparently, we’re getting there.

As TechSpot says it, “even the most powerful universe simulation would be subject to certain limitations of its host universe. The team believes those limitations would be observable by its inhabitants, too.”

Finding those limitations involves studying how particles travel through the universe and how they might react to the edge of the universe, Wired reported.

It might make you think about Christopher Columbus setting sail to prove the world is round, not flat.

Only this time, Beane is using computers to learn if the universe is sitting on a lattice with a definable edge.

At least I think that’s what happened.

More from GlobalPost: Scientists discover planet made from diamonds