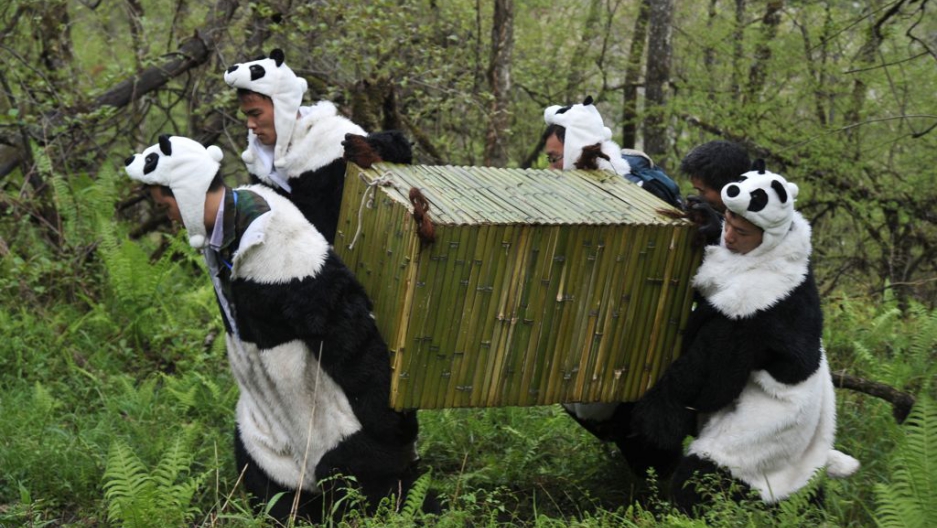 These are not pandas. They're keepers wearing panda suits to try and prevent captive pandas getting used to the sight of humans.
Share

Taotao the giant panda has taken his first steps into the wild, where his fate depends on the survival techniques taught him by his keepers.

According to China Daily, he had to be coaxed out of his cage by one of his handlers, but soon headed off out of sight into the thick bamboo forest.

Unbeknownst to him, Taotao has been preparing for his release ever since he was artificially bred and born in captivity two years ago.

He was put through a three-stage training course, Xinhua news agency says: first, he was left with his mother to learn the basics of panda behavior; then, he was exposed to "mud-rock flows, snow disasters and rainstorms"; finally, he was taught to identify other pandas, and potential enemies.

His keepers wore head-to-toe panda suits throughout, in a bid to stop him identifying with humans. The costumes are even smeared with panda urine and feces to disguise the foreign scent, according to the Guardian.

The Hetaoping Research and Conservation Center for the Giant Panda, where Taotao received his training, has been running its survival course since 2003, the People's Daily reported.

Some of its techniques include planting a model of a leopard, complete with roar, in the pandas' enclosure, and showing them video footage of other pandas of various ages and sizes to help them understand their place in the hierarchy, according to China Daily.

More from GlobalPost: The very high price of pandas

Until now the center's first and only graduate was five-year-old Xiangxiang, who was released in 2006 but survived only a year on his own. Researchers believe he got into a fight with wild pandas, climbed into a tree to hide, and then fell to his death.

Taotao, hopefully, stands a better chance, having been kept in "semi-wild" conditions since birth. "This means that its fighting capability and survival skills both improved significantly," research center director Zhang Hemin told Xinhua.

He'll need them: he shares the nature reserve with predators including bears, leopards and wolves. He also has to feed himself and avoid falling ill.

Researchers will be monitoring his progress via a GPS tracking device in his collar. Run free, Taotao, run free.

Here's video from the Hetaoping Research and Conservation Center, courtesy of the Guardian: