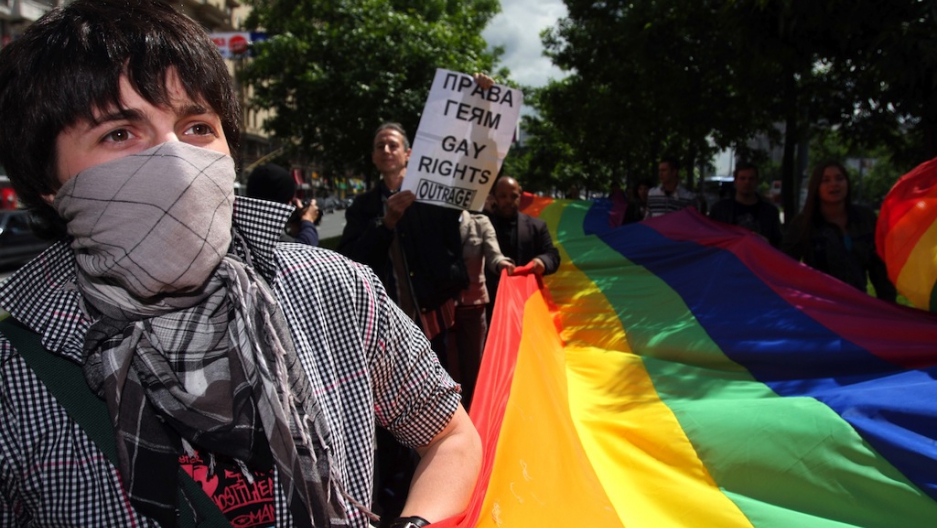 Members of the Russian gay community and gay rights activists from Europe hold flags during a banned gay rally in Moscow on May 29, 2008. Gay pride parades are routinely prohibited by city authorities. The parades often end with arrests.
Credit: Andrey Smirnov
Share

A group of Russian nationalists attacked a Moscow gay bar on Thursday, threatening patrons with broken bottles and guns in an assault that coincided with International Coming Out Day.

RT reports that a group of about 80 gay bar patrons had assembled to celebrate the gay-rights holiday when a group of masked men, dressed in a fashion typical of Russian nationalists, stormed into the building.

“They were overturning tables and beating customers. Many were injured,” witness Pavel Somburov of the Rainbow Association told RT. “Then they suddenly left after an order from one of them.”

Three women and a man were injured in the attack, says the New York Times, while ten people suffered injuries. The attackers are still at large, although police are hunting for them.

Somburov told the New York Times that the attack was "a pogrom."

Read more from GlobalPost: The Rainbow Struggle: a global battle over gay rights

Russia is not exactly progressive when it comes to gay rights: in August, Moscow banned gay pride marches for 100 years, reported the BBC, despite efforts to overturn the ban by activsts.

Meanwhile, St Petersburg has implemented a new ban on "gay propaganda" within the city limits, reports the Christian Science Monitor—and 70 arrests have been made, although only one so far has resulted in conviction.

Eternally controversial pop-star Madonna was sued by conservative Russian activists in August for asking the crowd at a concert to raise their hands in support of gays and lesbians, in violation of St Petersburg's new ban on such activities, says Entertainment Television.