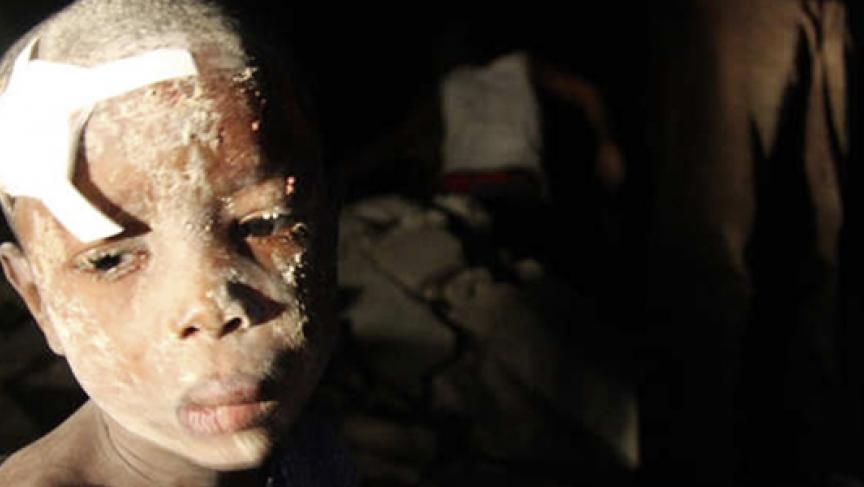 A boy covered in debris and with a bandage on his head waits for medical attention in Port-au-Prince, Haiti, after a 7.0 magnitude earthquake in 2010. (Photo by Matt Marek/Reuters.)

Shortly after a massive earthquake struck Haiti in January 2010, Andy and Jennifer Day found themselves at their Indiana home, watching a telethon.

“It showed this panel of all these big celebrities,” Andy recalled.

But what really caught the couple’s attention were the pictures of kids — bandaged and bleeding, missing limbs. The Days decided they could not sit by as mere observers of the suffering.

Andy is an anesthesiologist. Jennifer is a registered nurse.

After the telethon, Andy mentioned to some colleagues that he and his wife were interested in volunteering in Haiti. A few weeks later, their phone rang. It was a local surgeon who was headed to Haiti.

“He said, ‘Hey, are you still interested?’” Andy remembered. “And I said, ‘Sure. What are you thinking of?’”

The man told Andy, they had to be a plane the next week.

Before they knew it, Andy and Jennifer had landed in Port-au-Prince. Almost immediately, Jennifer had second thoughts.

“I really just wanted to stay at the airport and hide,” she said. “It was just elbow to elbow — complete chaos.”

Neither Jennifer nor Andy Day had never worked outside a U.S. hospital before. That makes them pretty typical among the medical volunteers who went to Haiti.

According to one study, co-authored by Richard Gosselin of UC Berkeley’s School of Public Health, almost two-thirds of the surgeons who volunteered in Haiti had no prior disaster experience.

Gosselin worked in Haiti after the earthquake and he says he could spot the amateurs right away.

Harvard physician Stephanie Kayden, director of the International Emergency Medicine Fellowship at Boston’s Brigham and Women’s Hospital, says even in a disaster area, surgeons are responsible for making sure that anesthesia will be provided during their surgeries.

But Kayden says many surgeons in Haiti lacked training in international emergency medicine and did not think to bring anesthesia with them. She says that had serious consequences.

“Surgeries were either delayed because surgeons didn’t want to operate without the anesthesia, or people had to undergo amputations and other surgeries without anesthesia, which was horrifying,” she said.

Even doctors who tried their best to provide good pain management encountered difficulties.

Andy Day accompanied a surgeon to Haiti in the hopes that none of their patients would have to endure surgery without anesthesia.

Before he left the United States, Andy checked and was told there was a drug supply awaiting him.

But once surgery got underway, Andy encountered problems with the drug supply that he had inherited. He found out the hard way — and too late — that sometimes the medicines he was using weren’t making the patients fully numb.

“My suspicion is we had these medicines that had been sitting in a 100-plus-degree heat in this uncirculated, unventilated, un-air-conditioned facility,” he said. “And I suspect some of those medicines were either rendered ineffective while in storage down there, or maybe were expired, old stock from other places that had been donated and were long since ineffective.”

Experts who have studied the medical response in Haiti point to other serious problems that stemmed from disorganization or basic lack of experience among volunteers.

Of the thousands of amputations performed in Haiti, many may have been avoidable, experts say.

And the medical procedures used to save injured limbs may have been inappropriate, too.

In one of those procedures, known as external fixation, surgeons place a metal rod along a patient’s limb (as opposed to encasing it in a cast). Doctors then stabilize the rod by screwing pins into the patient’s bone.

Fixators work well in Western hospitals and even in war zones, where troops are whisked from the frontlines to recuperate in sterile environments.

“External fixators have to stay in the skin, screwed into bone underneath the skin, for three months,” Kayden says. “And during that three months or so, you have to keep it from getting infected. In Haiti, where people are living in tents or in open air, it’s very difficult to keep them from getting infected. And I would say, in Haiti, it created a big problem for a lot of people.”

Kayden and others say simpler, less invasive techniques to treat broken bones would have been a better option in Haiti.

Of course, any criticisms of the way medical professionals handled themselves in Haiti should recognize that this was a disaster of enormous scale.

If doctors and nurses hadn’t been there, many Haitians might have died for lack of any care at all. In fact, many did die because they received no medical treatment whatsoever.

The question is: How much good did volunteers do in the end, and how much harm did they cause?

The institute sent questionnaires to 274 entities that worked in Haiti after the earthquake to get details on the type and quality of care provided. But of those 274 questionnaires sent out, just four were returned.

The authors said their inability to determine the outcome of medical activities in Haiti “raises serious accountability questions.”

Andy and Jennifer Day traveled from Indiana to Haiti with just one orthopedic surgeon and his physician’s assistant. When asked the name of the organization they traveled with, Andy said there's wasn't one.

Those who have studied the medical response in Haiti are urging some changes before the next major disaster strikes. For one, many are calling for some kind of registration process for medical volunteers, which would be a step toward accrediting teams that deploy to crisis zones.

In addition, experts say organizations should do a better job tracking the outcomes of their efforts and sharing what worked and what didn’t. Doctors and nurses should also get training in international emergency medicine before volunteering in a disaster, they say.

As for Andy and Jennifer Day, they too would do things differently next time. They say they would not jump on a plane and rush to a crisis zone.

“That’s not the way I want to spend my life making the world a better place,” Andy said.

Jennifer wonders if there might have been a better way to help those suffering in Haiti.

“Would our money, sending money — would that have done more good for more people?” she asked.

Jennifer and Andy Day have not ruled out volunteering again, but next time they say they will join up with a seasoned organization that really knows the local environment and how to practice medicine in the chaos of a disaster.

This story is an excerpt from Amy Costello’s podcast Tiny Spark, which is produced in collaboration with the Chronicle of Philanthropy. Listen to the full podcast. See photos of medical volunteers in Haiti at Tinyspark.org.