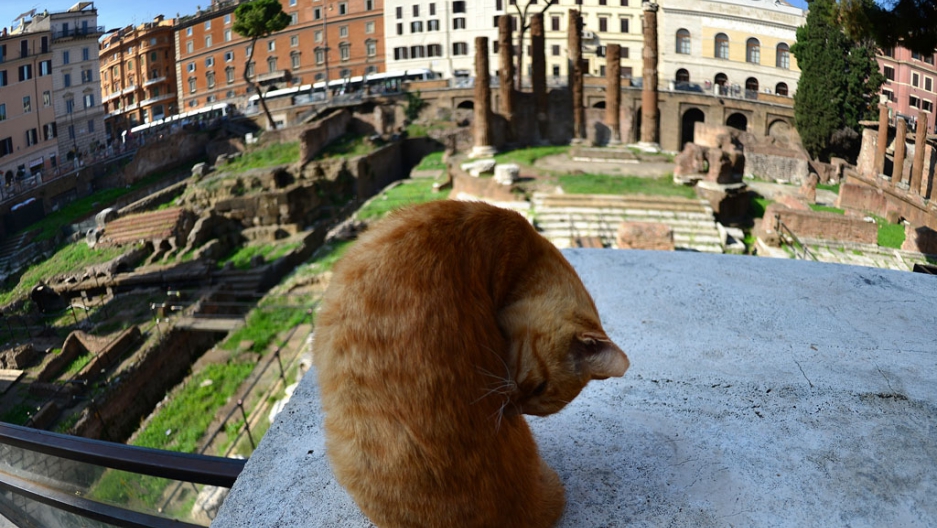 A cat sits at the Largo di Torre Argentina on October 11, 2012 in Rome, the exact spot among ancient ruins where Roman general Julius Caesar was assassinated on March 15, 44 BC, researchers say.
Credit: GABRIEL BOUYS
Share

We know when, how and who was responsible, now Spanish researchers believe they’ve found exactly where Julius Caesar died more than 2,000 years ago.

The National Spanish Research Council (CSIC) announced recently that an archeological site in the center of Rome might be where a group of Roman senators – Et tu, Brute? – stabbed the general to death.

Art and history teach us that Caesar died at the base of the Curia of Pompey, a theater, and now scientists might have found it.

“We always knew that Julius Caesar was killed in the Curia of Pompey on March 15, 44 BC, because the classical texts pass on so, but so far no material evidence of this fact, so often depicted in historicist painting and cinema, had been recovered,” researcher Antonio Monterroso said, according to NBC News.

More from GlobalPost: Who says Rome is dead?

Caesar’s final landing place might be a stone structure about 10-feet wide and 6 ½ feet tall near Torre Argentina in Rome.

It’s a bus stop used by hundreds of people every day, The Express reported.

The scientists discovered the structure as they explored a site called Portico of the Hundred Columns, or Hecatostylon.

According to NBC, historians have written that the Roman Empire turned the Curia structure into a shrine to Caesar.

Monterroso’s team believes it can definitively point to the Curia of Pompey as Caesar’s last stand by comparing the dig site with historical texts.

“This finding confirms that the general was stabbed right at the bottom of the Curia of Pompeii while he was presiding over a meeting of the Senate,” Monterroso said at Express.co.uk.

“We know this because there is a structure that seals the place where Caesar must have been seated.”