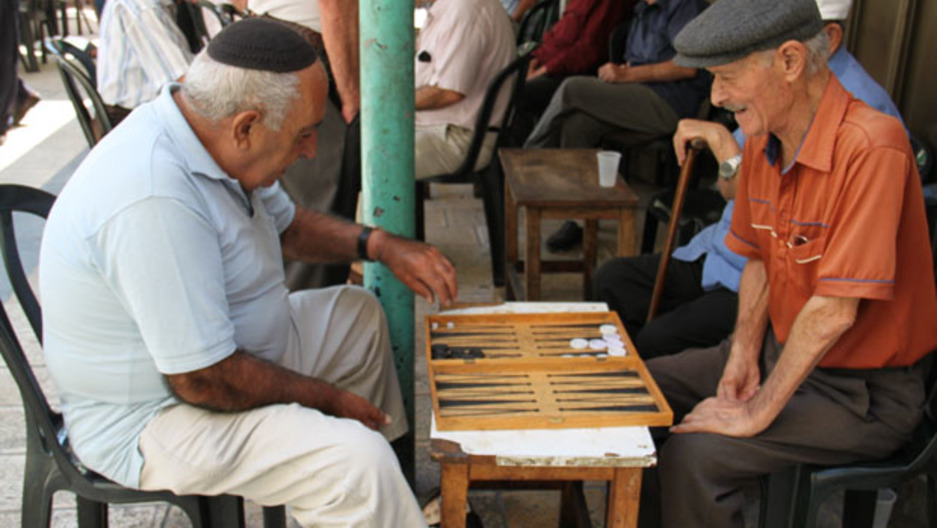 Menashe Butkov, left, came to Israel from Baghdad when he was 17, after he began to be persecuted for his faith. (Photo by Daniel Estrin.)

Israeli Palestinian peace negotiations have been stalled for the last four years.

But now the Palestinian president said he will be willing to talk peace after the United Nations votes on a Palestinian request for "nonmember state" status in November.

If and when negotiators hunker down at the peacemaking table, one of the thorniest issues they’ll duke out is the fate of the Palestinian refugees forced to leave their homes when Israel was created more than 60 years ago.

Israel is now waging a campaign to add another issue to the peacemaking agenda — the plight of Jews from Arab countries forced to leave their homes.

If you’re a Jew who moved to Israel years ago from Syria or Lebanon or Iraq, a club house in a back alley of Jerusalem’s outdoor vegetable market is the place for you. No frills, just a few plastic flowers taped to the walls, and the clacking sound of Middle Eastern Jewish men playing backgammon.

Menashe Butkov moved to Israel with his family from Baghdad when he was 17. He said after the Mideast war of 1948, when Israel was established and many Palestinians fled or were kicked out of their homes, Jews were treated with hostility in Iraq.

“Why did we leave? They said, 'you are Jews. You took the Arabs’ homes. And so we’re taking your homes.' They threw us out with nothing. We left our homes, we left our property, and came here,” Butkov said.

That’s a story that’s been forgotten, Israeli diplomats say — the story of the Jewish refugees' flight from Arab lands.

For more than 2,000 years, up to a million Jews lived across the Middle East, but hose numbers rapidly dwindled drastically after Israel was founded.

Hanan Ashrawi, a senior Palestinian official, is not at all pleased with the Israeli campaign.

“Opening up this can of worms is not a joke,” she said.

Ashrawi argued that many Jews weren’t “kicked out” of Arab countries. They came to Israel for the most part because they wanted to live in their spiritual homeland, not because they were forced to. And Israel worked hard to bring those Jews to the fledgling Jewish state.

“While at the same time,” she said, “(Israel) carried out a massive campaign of expulsion of Palestinians. So who’s a refugee?”

Ashrawi said Middle Eastern Jews can try to get compensation from Iraq or Syria or anywhere else, but that’s got nothing to do with Palestinians. Demanding that restitution for Jewish properties be dealt with during Israeli-Palestinian peace negotiations is a dangerous proposition, she warned, because the Palestinians could demand the same. Palestinians also lost property. Property that is in today’s Israel.

"it wanted to save those assets, or property, to use it against the claims of the Palestinians in future negotiation over their property and assets," he said.

Here’s a solution Israel is putting forth: a big international pot of money for Palestinians and Middle Eastern Jews.

Float that proposal here in the backgammon club, and many Middle Eastern Jews just shrug. Menashe Yaakov, who left northern Iraq for Israel in 1951, said he doesn’t expect Israel to ever finagle reparations.

“How many times have Israeli officials tricked us?” he said. “They said, ‘fill out this form, sign that.’ My father, may he rest in peace, wrote letters a few times to Israel and the Jewish Agency. Now who will give anything to us? Everything is gone."

Basically Israel’s saying to its Middle Eastern Jews — wait till there's peace with the Palestinians, then compensation will come. But around these parts, people have learned the hard way that waiting for Israeli-Palestinian peace is just like waiting for Godot.