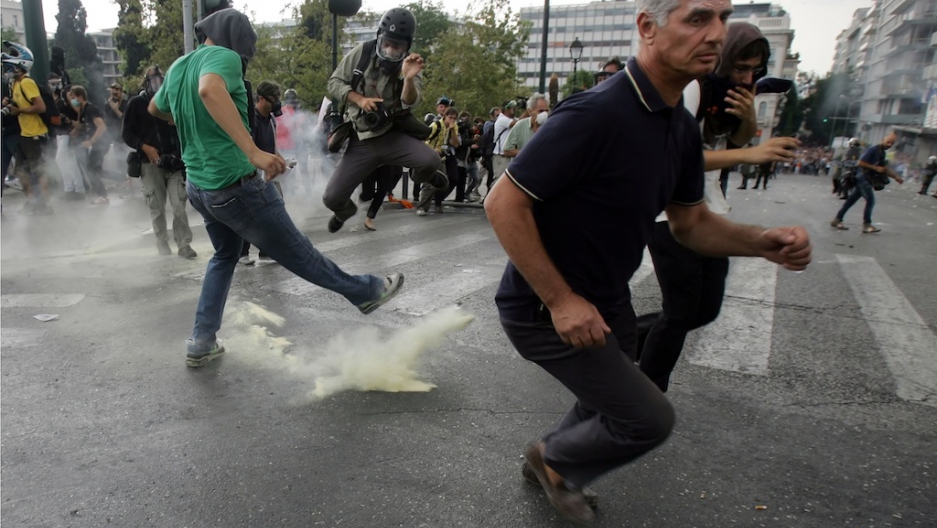 In another sign of major discord in the EU, demonstrators in Greece clashed with riot police during a protest against a visit by Germany's Chancellor Angela Merkel in Athens, October 9, 2012. The EU was awarded the Nobel Peace Prize this morning, but some don't see why.
Credit: Milos Bicanski
Share

Norway received a combination of disbelief and applause from the international community today for the Nobel's committee's announcement that the 2012 Nobel Peace Prize will go to the European Union for its transformation "from a continent of war to a continent of peace" and its focus on "peace and reconciliation, democracy and human rights," according to the BBC.

However, Europe isn't perfect, and human rights abuses still plague the continent. Human Rights Watch has called for the "end to business as usual" in the EU, although the prize is "a recognition of the EU's contribution to democracy and human rights in Europe," reported the Telegraph.

"The EU must be more forceful in combating human rights abuses at home, including restrictions against asylum seekers and migrants, and violence and discrimination against minorities," said HRW Europe director Lotte Leicht in a statement this morning. "Its voice much be heard loud and clear around the world exposing human rights abusers and raising the price for human rights crimes, even when the abuser is financially and politically powerful."

These are our top five human rights issues in the EU, in no particular order.

Deportations of immigrants by the thousands continue in Europe's most riotous country, after a mass sweep in August turned up 6,000 undocumented immigrants, 1,500 of which were arrested and sent to detention centers to await deportation. Amnesty International called Greece's deportation tactics "deeply alarming" in April.

Greek authorities are calling the influx of foreigners an "invasion," and Public Order Minister Nikos Dendias blamed immigrants for bringing the country to the "brink of collapse," reported the Daily Mail.

“Greece has the right to enforce its immigration laws, and after a fair process, to deport people with no legal basis to stay in the country," said Benjamin Ward, deputy director of the Europe and Central Asia division at Human Rights Watch, in a statement in August. “But it doesn't have the right to treat people like criminals or to presume irregular immigration status just because of their race or ethnicity.”

The police have been accused numerous times by rights groups for targeting immigrants and being heavy-handed with protesters and undocumented people who are HIV positive. Not to mention, immigration centers are rife with abuses, according to a 2011 report by HRW called "The EU's Dirty Hands."

We've reported a few times on the far-right Jobbik party's anti-Semitic and anti-Roma rhetoric, but it hasn't yet abated. In fact, Jobbik is stronger than ever, and demonstrations in Roma towns, as well as a call for reinstating capital punishment, continue.

Last month, Jobbik held a demonstration celebrating a 97-year-old man named Laszlo Csatary, who is Europe's most wanted surviving war crimes suspect. He is under house arrest in Budapest for allegedly being in charge of a Nazi internment camp in Kosice, Slovakia, the stopover camp before Jews were sent to Auschwitz and other death camps, reported the Associated Press.

Ultra-nationalist Jobbik won 13 percent of seats in Hungary's parliament in 2010, making it the country's third-largest political party. They continue to host rallies that spiral out of control and organizers have been accused on racism on a grand scale, as well as inciting violence.

"Discriminatory violence, and incitement to discriminatory violence, against any section of Hungarian society should be publicly condemned and all acts of racially motivated harassment and violence thoroughly investigated," said Jezerca Tigani, Deputy Director of Amnesty International in Europe and Central Asia after a particularly violent demonstration in a village called Devencser that's home to a mostly Roma population.

More from GlobalPost: Why you should care about Hungary's rabid right

Expulsions of Roma and the razing of camps throughout France have had rights groups up in arms since President Sarkozy announced he would make moves to crack down on the Roma population in 2010. His successor, Francois Holland, has not changed the government's policy on the Roma, and have continued to dismantle camps and forcibly relocate Roma to their home countries.

Catholic Bishop Jacques Gaillot said the way the camps were cleared in August was "scandalous," according to the Telegraph.

"If you're going to kick people out, you have to know what you're going to do with them," he said of the nearly 15,000 Roma living in France. "That wasn't the case here. It's a disgrace."

Amnesty International called on France to re-asses its policies, but there hasn't been a shift from the administration. "We have not seen a clear commitment from the government to put an end to forced evictions and make sure that a policy is put in place which respects and protects their right to housing - France needs to bring its laws into line with its international obligations. Until the appropriate measures are taken, evictions of Roma will continue," said Tigani in a statement in August.

Just weeks ago, residents in Marseille took it upon themselves to expel about 50 Roma from their camp before burning it down, reported the AP.

Acting against its own 2004 ruling that indefinite detention violates the European Convention on Human Rights, the UK has held Wikileaks founder Julian Assange for nearly 700 days without charge. (Of those, 115 days have been spent in hiding at the Ecuadorian embassy, which he is unable to leave.) Even if Assange was suspected of terrorism, the UK could not hold him for more than a deadline of 14 days without charging him with a crime.

The government also threatened, and then retracted, an unprecedented violation of the Vienna Convention when it said it would storm the embassy to arrest Assange, to the embarrassment of everyone involved. Ecuador’s Foreign Minister Ricardo Patino called the threats, “improper of a democratic, civilised and rule-abiding country."

Meanwhile, the debate continues over how to handle the Assange situation, as many fear if he is extradited to Sweden, they will hand him over to the US where he will surely face charges for leaking classified documents.

The country's own National Committee for the Fight against Human Trafficking admits that Bulgaria is one of the EU's top offenders in this area. International protest group FEMEN, which attempts to call attention to the problem of sex trafficking, staged one of their signature topless protests in Sofia in January.

In June, a coordinated effort by France, Bulgaria, Poland and Belgium took down a trafficking ring operating in a number of EU member states, but only nine people were arrested, and according to the State Dept., the Bulgarian government overall investigated fewer cases in 2012 than they did in 2011.

Ultimately, yes, the past few decades have been positive in Europe, as far as reconciliation and peace. As Slate's Matthew Yglesias wrote this morning, "the EU very clearly seems to have been a major force in favor of the consolidation of democracy in post-communist Central Europe."

But many don't see why the union deserves the Peace Prize, especially now when so many countries are facing austerity cuts and mass protests.

"The peace prize? The way things are going, what will happen in the immediate future? Peace is the one thing we might not have," said Giorgos Dertilis, an insurance company worker in Athens, to the AP.