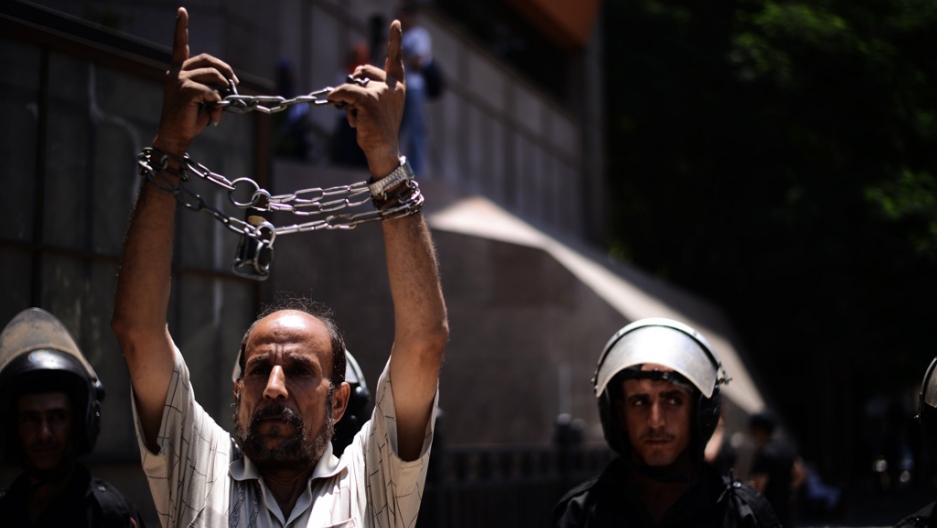 An Egyptian man who chained his wrists, protesting against military trials as demonstrators outside Cairo's administrative court await a ruling on the panel of judges designated to decide on the legitimacy of the constitutional committee, on July 30, 2012 in Cairo.
Credit: Gianluigi Guercia
Share

CAIRO, Egypt — Egyptian lawmakers have released a partial draft of Egypt’s highly anticipated constitution, a document meant to embody the spirit of the Tahrir Square revolution.

For months, lawmakers and other civil society and political actors have battled to safeguard rights, promote Islamic principles or ensure the end of authoritarian rule.

The overwhelming presence of Islamist lawmakers — both from the Muslim Brotherhood and the more conservative Salafi Al Nour party — on the 100-member Constituent Assembly has worried liberals, secular-minded citizens and women’s right campaigners who fear personal freedoms will be rolled back in any new constitution.

So how are things looking? Here's what democracy activists say are the five most positive — and most negative — articles included in the latest draft.

Military trials: Egypt’s draft constitution abolishes both military trials for civilians and the special state security courts to prosecute citizens. Military trials were a defining characteristic of the rule of Egypt’s army generals following the uprising last year, when more than 12,000 civilians were tried in military tribunals. Under deposed President Hosni Mubarak, opaque state security courts were formed to indict dissidents away from the public eye. The Muslim Brotherhood has vocalized their support for eradicating the military judicial system for civilians. “I myself was tried in a military court and was imprisoned for three years,” said a leader of the Brotherhood’s Freedom and Justice Party in Cairo, Ayman Abdel Ghani. “Of course we are the first to reject military trials for civilians.”

Free expression: Despite conservative Salafi Islamists having pushed for a provision that criminalizes blasphemy — and following years of censorship and oppression under Mubarak — Egypt’s draft constitution now contains strong language that guarantees freedom of expression. Article 9 of the “Rights, Freedoms, and Duties” section now reads that, “every human is permitted to express thoughts and opinions through speech, writing, images, or any other method of publication or expression.”

Protests: Demonstrations and strikes, now a central feature of daily life in Egypt, are fully de-criminalized and safeguarded in the draft constitution. Under Mubarak’s emergency laws, a gathering of more than five people was considered a security threat — and therefore punishable by law. Now, “Citizens have the right to organize.” “The legalization of demonstrations and of labor strikes — this is a very positive thing,” said Israa Abdel Fattah, co-founder of the April 6 Movement, the activist group that helped spearhead the revolution.

Term limits: Having just rid themselves of their very own “president for life,” Egyptians are keen to ensure they don’t end up with another dictator. Mona Makram Ebeid, a former Member of Parliament and former constituent assembly member, said the clause limiting the president’s terms to just two is one of the most important. The previous constitution allowed the president to run for an unlimited number of terms.

Civil society: Civil society organizations will enjoy much softer regulations than they did under Mubarak and the ruling military council. Such organizations faced a rigorous registration process that forbid them from almost all political activities and opened their doors to Egypt’s myriad intelligence agencies. The previous constitution devotes several lines to associations whose “activities are hostile.” Now, organizations will notify the proper authorities and only be dissolved by a court ruling. “There are a lot of articles that guarantee rights for Egyptians,” said Ahmed Al Nahhas, a Brotherhood leader in Alexandria. “And the article governing the establishment of [civil] society groups is one of them.

Torture: Widespread police abuse, including torture, was at the heart of the uprising against Mubarak. Many Brotherhood members, as well as ordinary citizens, suffered at the hands of brutal police forces that operated with impunity. So human rights observers were shocked when Egypt’s draft constitution came out with no explicit ban on the practice. Article 5 instead prohibits lesser forms of “physical or psychological harm,” Human Rights Watch said. “This makes it difficult to prosecute police for torture that occurred in the Mubarak era,” Human Rights Watch said in a statement this week.

Freedom of religion: Religious freedom suffers under Article 8 of the draft constitution, where the three main monotheistic religions (Islam, Christianity and Judaism) are the only religions guaranteed freedom of worship and the right to build mosques, churches and temples. While the clause marks a step-up from the previous constitution, guaranteeing rights for Jews and Christians, it excludes Egypt’s several thousand followers of the Baha’i faith, a religion yet to be recognized by the Egyptian state. Human Rights Watch called the article “discriminatory.”

Women's lib: Women’s rights have been one of the most contentious issues of the constitution, particularly as Islamists take the helm. Echoing the language of the previous constitution, a new article in the draft constitution guarantees women’s equality with men, so long as it does not conflict with “the rulings of Islamic sharia.” Abdel Fattah says the clause can be interpreted in many ways. “Does it mean a woman can’t travel alone, or can’t run a business?” she asked. “We reject this completely.” Makram Ebeid, who recently resigned from the constituent assembly, said the draft “fails” on women’s rights. “Some extremist groups want to eradicate some of the most hard-won rights of women.”

Sharia law:  Islamic law or secular state? It’s a dilemma Egyptian lawmakers have struggled to answer since the uprising last year. The Salafis reportedly gave up on an article that would have made sharia law the sole source of Egypt’s legislation. But a clause now under debate in the constituent assembly may do just that. The article would reportedly place Al Azhar, the premier seat of Sunni learning, as the single body authorized to interpret sharia. The move would grant Al Azhar “a vetting role to certify the consistency of all legislation with sharia,” according to Human Rights Watch. The institution would be unelected, and would not be subject to judicial review. The Brotherhood’s Nahhas says all laws, including international treaties to which Egypt is party, should be vetted by sharia principles first.