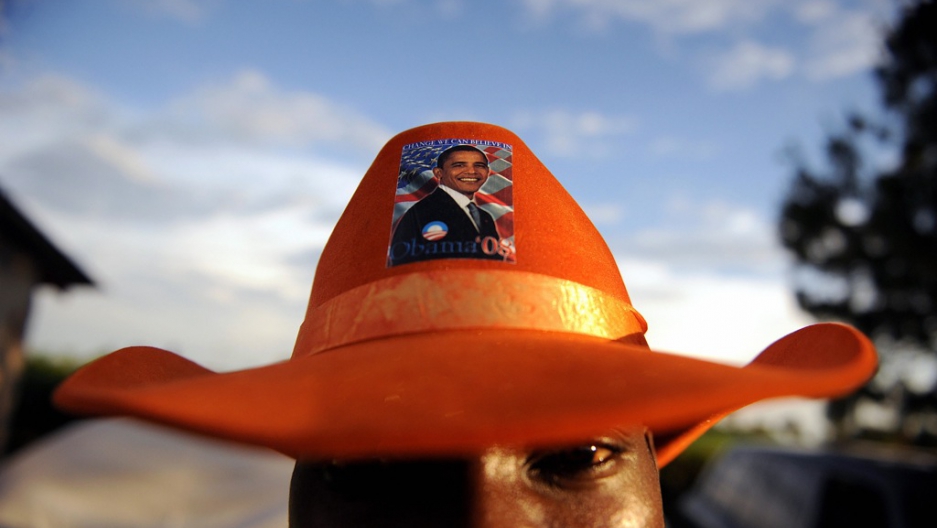 A supporter of US Democratic presidential hopeful Barak Obama sports a hat bearing a sticker of Obama in the village of Kogello on November 4, 2008.
Credit: TONY KARUMBA
Share

NEW YORK, NY — There is a palpable thrill in Africa at the prospects of a second term for President Obama, even though in his foreign policy, Africa has not been a priority. Apart from visits to Egypt and Ghana, he has done little about the Malian meltdown, HIV-AIDS, education, small arms, rising food insecurity linked to global warming and South Sudan’s increasingly precarious status as it hovers near a new war with the North.

Compared to his predecessors, presidents Clinton and Bush, he achieved little. Because Obama’s family roots are in Kenya, many of us Africans feel entitled to a deeper involvement in the affairs of the continent; yet we must remember that Obama is not ours, he doesn’t speak for us, and he doesn’t owe us anything. Obama is an American, although we are pleased to note his African-sounding name.

President Obama’s election was “a political earthquake whose tremors felt strongly in Africa,” writes Nil Akuetteh, Africa policy analyst and founder of Democracy and Conflict Research Institute. Obama’s 2008 victory was stupendous for America, but President George W. Bush is the one who gave strong support for democracy in Africa. We Africans wonder whether the Bush enthusiasm eventually will be matched by Obama, or whether, indeed, Obama will even be able to understand the problems of Africa and push effectively for democracy on the continent?

If African governments must adhere to good governance, human rights practices and strive in other ways to become democratic, what policies should the Obama administration pursue to encourage African leaders? Should Obama continue President Bush’s freedom agenda in Africa? How should he handle US/Africa foreign policy?

President Bush promoted democracy in Africa with more affirmative persistence than his predecessors. He said that democracy in Africa was his top foreign policy priority. His second inaugural address was devoted to the “freedom agenda.” “All who live in tyranny and hopelessness,” he proclaimed, “can know: the United States will not ignore your oppression, or excuse your oppressors. When you stand for your liberty, we will stand with you.”

More from GlobalPost: What if Kenyans could vote in the US election?

Implicit in President Bush’s words was a departure from the longstanding US policy of supporting dictators while opposing those with greater democratic credentials. For more than 60 years, especially during the Cold War, US presidents sacrificed democracy and propped up friendly tyrants who claimed to be anti-communist. Julius Nyerere of Tanzania, Patrice Lumumba of Congo, and Amilcar Cabral Guinea were considered communist sympathizers while African dictators such as Jomo Kenyatta of Kenya, Mohammed Said Barre of Somalia, Samuel Doe of Liberia, and Mobutu Sese Seko Congo were supported.

Still, the Bush administration did not go far enough. It remained friendly to notorious African dictators, such as Hosni Mubarak in Egypt, Yoweri Museveni in Uganda, Meles Zenawi in Ethiopia, Idriss Deby in Chad, and Muammar Gadhafi in Libya. Even Sudan’s Omar al Bashir, who committed genocide, was spared Washington’s full wrath because he was assisting in Iraq and with the President’s “war on terror.”

More from GlobalPost: What if Nigerians could vote in the US election?

An old saying in The Gambia – “No matter how much one hates a dog, one must admit it has white teeth.” Despite the fact that Bush sometimes supported African leaders who did not practice democracy and good governance, Bush’s Africa policy promoted aid for fighting HIV/AIDS and malaria. President Bush further pushed the President’s Emergency Plan for AIDS Relief, popularly known as PEPFAR, and other programs. There were other provisions in the Bush Africa policy that became successful, such as trade, investment, and development, especially the promotion of the Millennium Challenge Corporation, Africom, military training in the Sahel and in East Africa, the war on terrorism, and his tireless promotion of democracy.

More from GlobalPost: What if South Africans could vote in the US election?

Democracy promotion should be President Obama’s vehicle for achieving African policy goals, such as expanding bilateral trade and investment, improving health and education, reducing poverty and preventing conflict. Obama’s second term should review and give attention to Africa to serve the interest of humanity.

President Obama could achieve lasting change by supporting democracy and refusing to support leaders who impede it. He should maintain President Bush’s rhetorical support for democracy in Africa while winding down relations with dictators in Sudan, Gambia, Ethiopia, Uganda, Rwanda, and Equatorial Guinea. He should convey to African leaders that adhering to good governance and human rights policies is the price he demands for friendly relations with his administration.

Alagi Yorro Jallow is the founding managing editor of the banned newspaper, Independent, in the Gambia. He was a Nieman Fellow at Harvard University and holds a masters degree from Harvard’s Kennedy School. He is winner of International Press Freedom Award. He now lives in New York City.