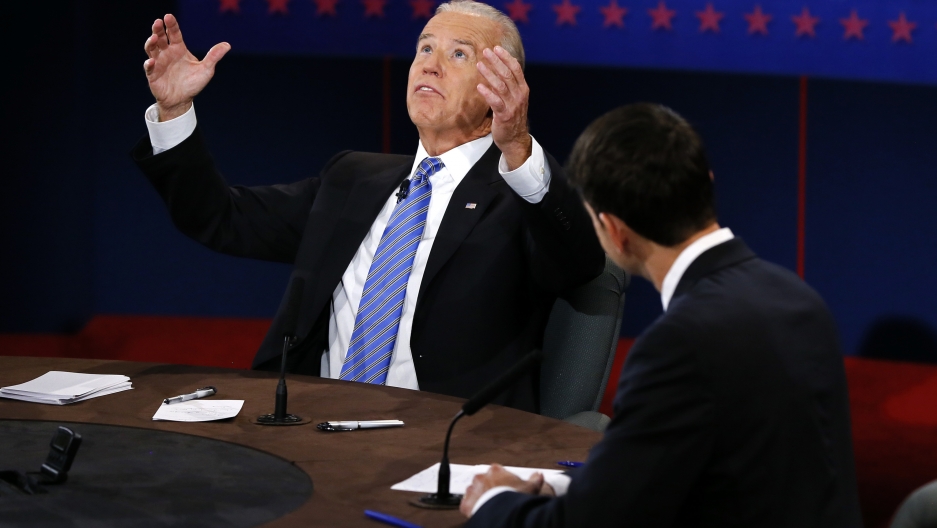 Vice President Joe Biden and Rep. Paul Ryan, his challenger, mixed it up on Thursday night, drawing clear lines, sharp contrasts and definite differences between them.

Both men were aggressive, even disdainful, but most experts found that Joe Biden was the "winner" — and the "loser." Biden sought control of the debate early, if for no other reason than to try and was away any rememberance of President Barack Obama's milquetoast performance in his debate with Mitt Romney last week.

In so doing, according to the Washington Post, The New York Times and even a CNN tracker of how many minutes each man spoke (Biden led in that by more than two minutes at the debate's conclusion) Biden took control of the debate and left Ryan largely as a spectator.

According to the New York Times, the real verdict on Biden's performance was somewhere in the middle. A CBS News poll of undecided voters gave Biden the edge in the debate by some 19 points over Ryan, while a CNN poll of voters, undecided or not, gave Ryan a four point edge over Biden, within that poll's margin of error.

"Perhaps Mr. Biden can be credited with what in baseball statistics would be termed a “hold”: something a bit shy of either a win or a save and which will probably seem perfunctory with the passage of time, but which might have done his team a bit of good," the Times' statistical analyst, Nate Silver, wrote on the FiveThirtyEight blog.

Throughout the debate, the two men sought to draw contrasts between each other. Smirking, laughing, interrupting and doing their best to paint the opposing side as bad for America. In one exchange, Ryan bashed the administration for failing to protect the U.S. consulate in Benghazi, to which Biden riposted that Ryan and his fellow House Republicans had voted to cut the budget for diplomatic security by millions of dollars.

The best moment, however, for both men, at least according to instant surveys from CNN of undecided voters, came at the end of the debate, when Biden and Ryan both spoke passionately about taxes and abortion — spending more time defending their own candidate and less time expounding on their beliefs.

If anyone won the debate Thursday night, however, it was likely moderator Martha Raddatz. The ABC News correspondent sharply moderated the debate, in contrast with Jim Lehrer, who was widely panned for his light tough in the preceding presdential debate. Raddatz asked sharp questions, demanded specifics and largely kept Ryan and Biden on topic and moving forward.

The next debate is Tuesday night, when Obama will seek to repair the damage done from his previous lukewarm performance.