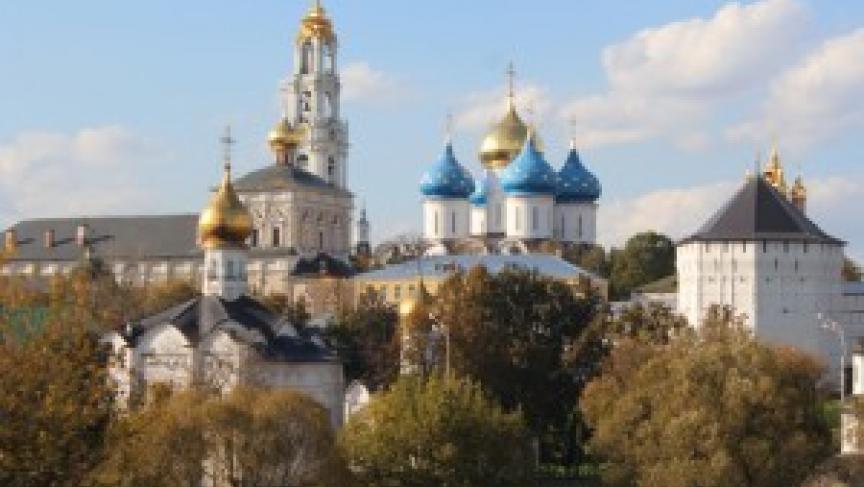 Russians are still figuring out what role the church should play in modern society. (Photo by Matthew Brunwasser.)

Theologically, the Russian Orthodox Christianity has always focused more on the spiritual world: following rituals and living a life free of sin, than on the earthly “good works” practiced by western churches.

Accordingly, a mobile soup kitchen in St. Petersburg is actually not the first place you’d expect to find an Orthodox church group.

Nikolai Fomitcheff, a leather designer and a volunteer, says that churches in Russia are getting more crowded. He notices it at every service. The church is also becoming more socially active: a change he attributes to Patriarch Kirill, who took over in 2009.

Fomitcheff says the church’s social activism is a way to reach out and offer comfort to believers who feel lost in the modern world.

“World events are making people think about the meaning of their lives and why they are here,” Fomitcheff said. “And in our church we have a lot of young people.”

After 70 years of atheist Communism, most Russians were alienated from religion. That’s especially true of young people, who generally know nothing about religion and saw the church as something far away. But observers say the new Patriarch is keenly aware of the challenges facing the church.

“I think his primary motivation is to raise the profile of the church in society,” said religion analyst Geraldine Fagan.

She says Kirill is more of a politician and diplomat than a pastor. So Kirill is trying to make the church more relevant, through social work, religious education and active engagement on social issues, like homosexuality.

“If the church actually is to have a future, then it has to be present in society,” Fagan said. “And I think he would understand it in those sort of terms.”

At the recent Queerfest in St. Petersburg, activist Olga Lenkova says the gay community feels singled out by the more confident church.

“The church has very strong anti-gay rhetoric, its getting stronger and stronger all the time,” said Lenkova. “Five years ago, they would ignore the issue and now they say homosexuality is a sin.”

Lenkova says the church’s new activism has enabled politicians to use the increasingly conservative mood of Russians to distract public attention away from real social ills. The most controversial measure, supported by the church, is a ban on “homosexual propaganda.” Legislator Vitaly Milonov says the law represents the morality of a large part of Russian society.

And he denies that the church had anything to do with writing the law.

“This is a problem of conflict inside our society, not inside our church,” Milonov said. “Because our society is split into two different parts, one direction is moving toward absolute freedom, and another part is trying to conserve our country, key values, stone values to build a house called Russia.”

Russian spirituality doesn’t get much stronger than at the Sergiyev Posad monastery. From here, Russia’s patron saint, Sergius, helped unite Russians against Mongol control in the 14th century. Today its one of the holiest places in Russia and many would say, the keeper of the spirit of Russian Orthodox Christianity.

Outside, worshiper Yulia, who like many Russians doesn’t give her family name to strangers, says the church doesn’t belong in politics.

But it should speak loudly about issues dear to Russians like “confirming moral values,” she said. “Including fighting with such things as homosexuality, which should be in the blood of each normal person. The so-called freedoms you have in Europe and the U.S. are not suited for us, they would be the ruin of us Russians and our souls."

But the church clearly faces a big job filling the pews with the faithful. Many Russians do support the position and moral authority of the church — it’s the institution they distrust.

nthropologist Jeanna Kormina says most Russians identify themselves as religious but almost none go to church.

In fact, statistics show that more than 70 percent of Russians consider themselves Orthodox believers. But only one percent go to church even monthly.