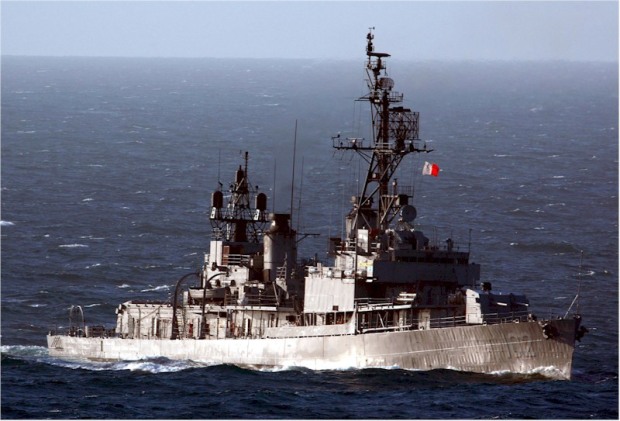 The Mexican Navy, including this destroyer, has played a leading role in that country's war on drugs.

The Mexican Navy on Wednesday was trying to explain how it had managed to lose the body of slain drug kingpin Heriberto “The Executioner” Lazcano.

Lazcano, the head of the Zetas drug cartel, was killed in a gunfight with Navy personnel on Monday, outside a baseball yard in the city of Progreso, near the Texas border.

But on Tuesday, his corpse was snatched from a funeral parlor.

The Navy says it didn’t know who they’d killed till the body was taken, at which point they decided to analyze fingerprints they’d collected.

But that narrative doesn’t exactly agree with the timeline of the case, as it had been reported in local media. Plus, it would be unusual for the Mexican Navy to be involved in a such a routine security operation.

The Navy has become the elite striking force in Mexico’s drug war.

“The army has become corrupted,” said George Grayson, of William and Mary College in Williamsburg, “and the police is also suffused with corruption.”

In addition, he said, the Navy is much better at cooperating with US officials.

“The army is still full of a toxic nationalism,” Grayson said.

The army, he says, remembers the humiliations it suffered in the Mexican-American War in the mid 1800s. The Navy by contrast is a much more modern and cosmopolitan organization, he said.

Grayson is co-author of a study of the Zetas cartel, “The Executioner’s Men: Los Zetas, Rogue Soldiers, Criminal Entrepreneurs, and the Shadow State they Created.”

He says the Zetas will bounce back from the setbacks of the last two weeks: two other top Zetas leaders have been arrested over that time.

The Zetas are like “a civil service,” Grayson says. There’s a chain of promotion, and there’s always someone ready to step into the shoes of a boss killed or captured — at any level.

Many leading Zetas, including Lazcano, are former Army special forces.

“They have an esprit de corps. They always try to bury their dead in a decent fashion,” Grayson said.

There have been several examples before of body snatching, he says, so the authorities should have been on alert.