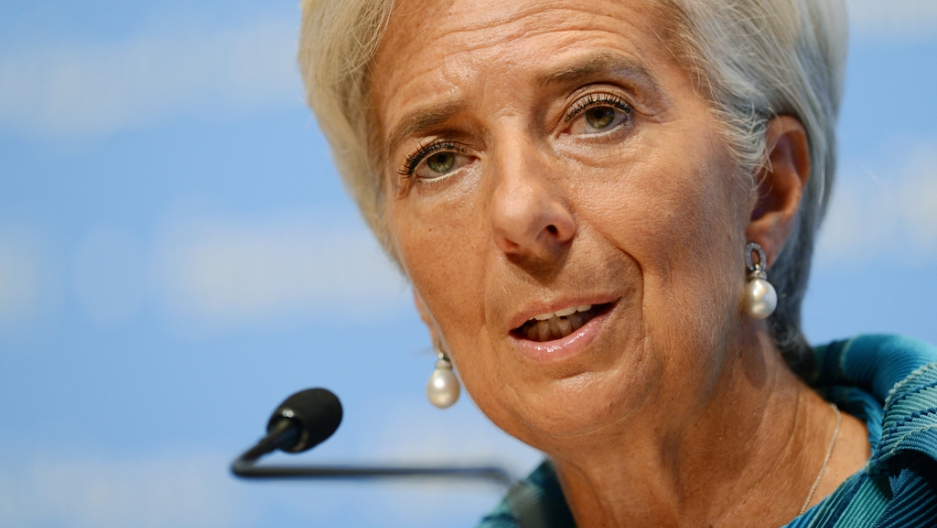 IMF managing director Christine Lagarde answers questions at a press conference during the annual meetings of the IMF and the World Bank in Tokyo on Oct. 11, 2012.
Credit: Toru Yamanaka
Share

TOKYO, Japan — The International Monetary Fund has called on the US and Europe to take decisive action to fix their economies, amid warnings that fallout from their debt problems is spilling over into emerging markets and the world's poorest countries.

The IMF's managing director, Christine Lagarde, praised recent measures by the European Central Bank and European governments to shore up the euro zone's financial system, but said "more needs to happen, and faster."

Urging European governments to ease up on austerity measures that were hurting economic growth, she also said she expected "courageous and cooperative" action from policymakers on fiscal policy. Failure to do so, she added, would prolong the cloud of uncertainty hovering over the global economy.

"There are threats on the horizon, threats that can be addressed, should be addressed but are not necessarily addressed," Lagarde told reporters at a meeting of the IMF and World Bank in Tokyo.

"The degree of uncertainty in Europe the US and other places is preventing investment and job creation."

Her robust comments come after the IMF downgraded its forecast for global economic growth this year from 3.5 percent to 3.3 percent, the second time it has cut its estimate since April.

Lagarde identified the euro zone as the "epicenter" of a global debt crisis that has sparked rising unemployment across the continent and an export slowdown in China, the world's second-biggest economy.

The US, she added, would edge closer to a "fiscal cliff" unless lawmakers acted soon to prevent spending cuts and tax rises due to go into automatic effect early next year. "Here, too, we expect decisive action," she said.

Her remarks put some European officials on the defensive days after the euro zone launched a permanent bailout fund to help struggling economies and banks.

"I am convinced that we will be able to tell our friends and partners around the world that Europe is in the process of solving its problems and Europe is aware of its responsibility," German Finance Minister Wolfgang Schaeuble told reporters.

Officials warned of signs that the debt crisis is having a ripple effect on emerging markets, such as China and Brazil, where demand helped lift the world economy out of recession in 2009.

Developing countries will also not be immune to the increased uncertainty in the global economy, World Bank President Jim Yong Kim said. "Everyone is vulnerable during times of uncertainty," he said, "but especially the poor, who have few if any safety nets and resources and live from day to day."

"Our job," he added, "is to make sure the growth over the last five years that we have seen in developing countries in Africa and Latin America and Asia is not destroyed by further worsening in the situation."

Campaigners urged participants in this week's meetings not to ignore developing countries. "It is imperative that the poorest countries are not overlooked at this meeting," Oxfam spokesperson Elizabeth Stuart said. "Europe's crisis needs to be fixed because the fallout is seriously threatening developing countries."

The conference has been overshadowed by an ongoing territorial dispute between China and Japan. China decided not to send its finance minister or the head of its central bank, apparently in protest to Japan's purchase of the contested Senkaku islands last month.

Lagarde said the absent officials would be missing a "great meeting," but added that "we hope that differences, however longstanding, can be resolved harmoniously and expeditiously so that from an economic point of view cooperation can continue... since we are all very closely interconnected."

Japanese Finance Minister Koriki Jojima described the absence of top Chinese officials from "an important international conference" as "very regrettable." China's foreign minister, Yang Jiechi, told reporters in Beijing that the decision to stay away from Tokyo was "completely appropriate."