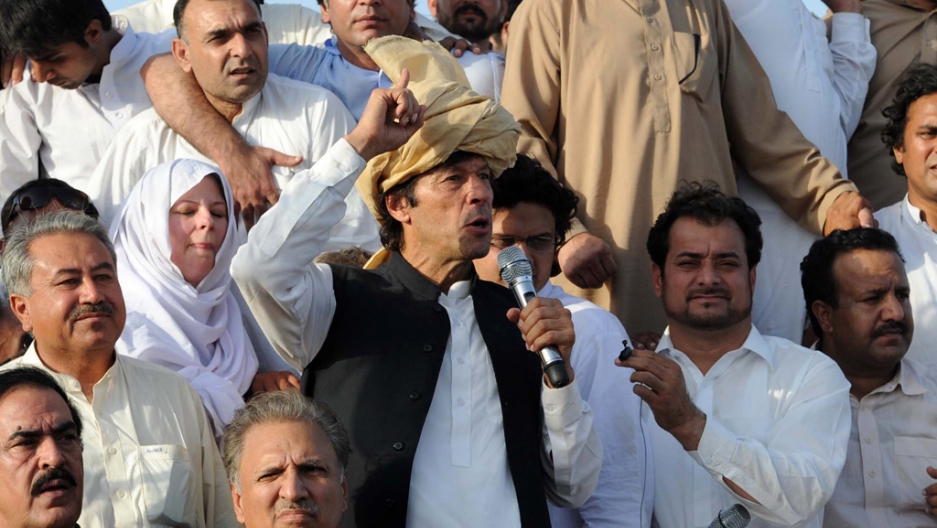 Pakistani politician Imran Khan addresses a peace rally in Tank on October 7, 2012. Khan and his followers were stopped from entering Pakistan's tribal region after they bypassed road blocks to press towards the region to protest against US drone strikes.
Credit: A Majeed
Share
.player-swf { margin:3px 0px 0px 30px; }

But Khan, the cricketer-turned-leader of his own political party, Movement for Justice, had decided not to visit South Waziristan after all. The army had reportedly warned him of possible attacks if he were to proceed.

“It is our constitutional right to go everywhere in Pakistan. Why aren't you giving us our rights? You are violating our laws. We warn you to open this road,” one man shouted at police at one such barricade.

“What does America have to do with our country?” he asked, questioning CIA drone policy.

The majority of protesters went to the nearby town of Tank, where Khan held a rally.

A delegation of about 30 from the US peace organization Code Pink joined the protest against the CIA-led drone campaign in Pakistan. “It’s about murder,” said Tighe Barry, a member of Code Pink who took part in the protest.

“[Pakistanis] don’t like to see their fellow brothers and sisters murdered by my rogue regime in Washington, DC as well as the warlord capitals by NATO in Europe,” Barry said.

Muhammad Anwar, a property dealer from South Waziristan, a former Taliban stronghold bordering Afghanistan, joined the protest, but he wondered if it mattered. It would not bring back his four sons, a brother, and the dozens of other family members who were killed by a drone attack during a funeral procession on June 23, 2009.

“I always drive slow,” he said. “Someone else wanted to take the wheel and speed up, but I refused. I called them twice to know where they were. We were about ten minutes behind another car with relatives.”

The drone killed 123 people in total, according to Anwar. News reports at the time mentioned other figures ranging from more than 60 to 83 killed. Anwar said that no terrorists were killed in that attack, just innocent people. Activists here say the large majority of victims of drone attacks are innocent.

Anwar said he sent a protest letter to the provincial governor and the political agent, or head, of South Waziristan, but he received no reply. The political agent was not available for comment. “We’re powerless,” Anwar said.

​This story is presented by The GroundTruth Project.