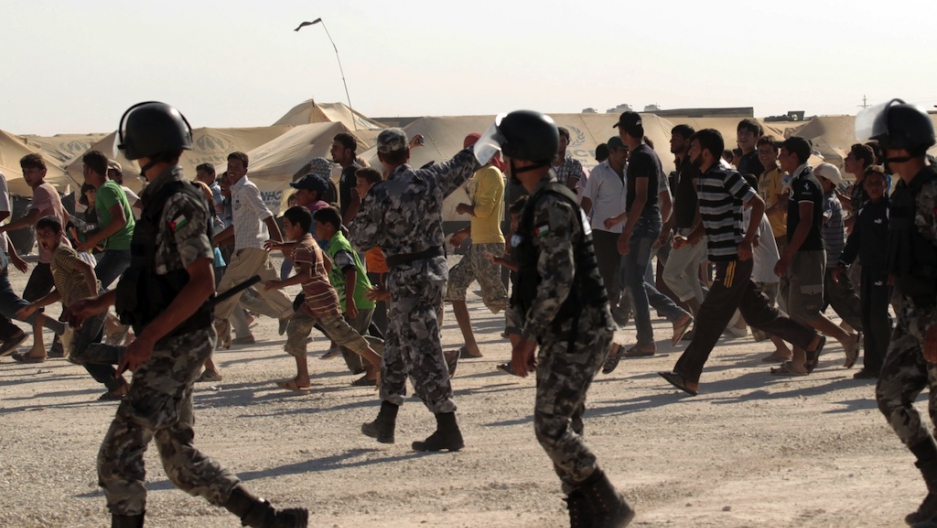 Syrian refugees seen running as UN Syria peace envoy Lakhdar Brahimi arrives at the at Zaatri refugee camp, close to the northern Jordanian city of Mafraq, and home to some 30,000 Syrians fleeing the violence in their own country, on 18 Sept. 2012.
Credit: Khalil Mazraawi
Share

The United States military secretly sent a task force of about 150 personnel into Jordan, The New York Times reported, as Turkey warned Syria on Wednesday of a stronger military response over shelling.

AFP quoted an anonymous US official who said the task force is based 35 miles from the border with Syria, the BBC reported. The AFP says it's "the closest US military presence to the Syrian conflict."

The New York Times reported that the task force arrived to help "handle a flood of Syrian refugees, prepare for the possibility that Syria will lose control of its chemical weapons and be positioned should the turmoil in Syria expand into a wider conflict."

Defense Secretary Leon Panetta confirmed the presence Wednesday, saying, "We have a group of our forces there working to help build a headquarters ... so that we can deal with all the possible consequences of what's happening in Syria."

Pentagon Press secretary George Little told the New York Times, "We have been working closely with our Jordanian partners on a variety of issues related to Syria for some time now.”

He added, “As we’ve said before, we have been planning for various contingencies, both unilaterally and with our regional partners.”

The presence of US military personal in Jordan is one of many signs of increased instability within the region that affirms the international fear that the Syrian civil war could explode into a regional conflict.

“We have all necessary plans in place to protect and defend Turkey if necessary,” he said.

In the video below, GlobalPost's Middle East and Africa Editor Peter Gelling offers his analysis on the escalating situation:

Turkey's military issued a statement Wednesday warning Syria that it would use "greater force" if the cross-border shelling between the two nations continued.

“We responded, but if it continues we will respond with greater force,” state television quoted the Turkish chief of staff, Gen. Necdet Ozel, as saying, according to Reuters.

An official told Foreign Policy's Situation Report the refugee crisis in Jordan is worse than anyone thought. "At this stage, you've basically got all these people who have their world upside down, they sense nobody cares," the officer said. "We are doing what we can."