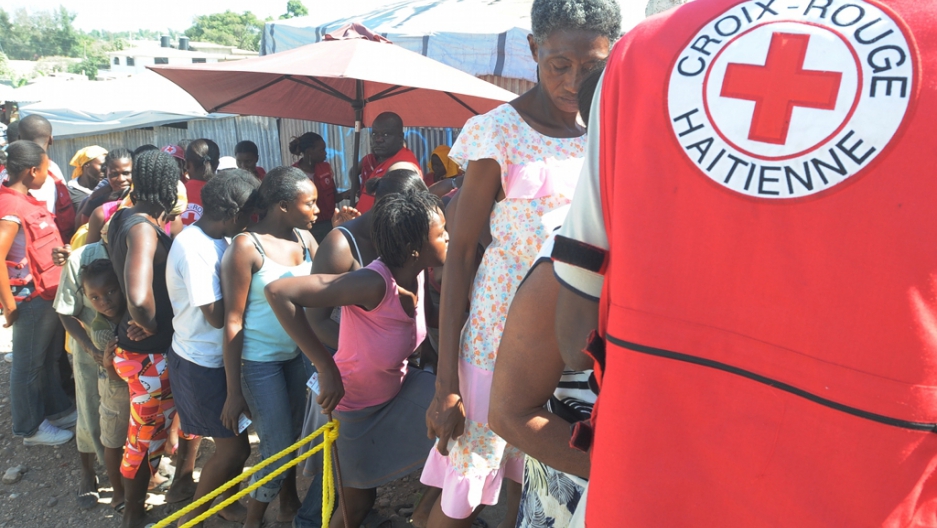 People receive medical kits to aid in the prevention of cholera on February 11, 2011 from the International Red Cross in a city tent in Delmas, a suburb of Port-au-Prince. Similar medical efforts to address depression and other mental illnesses through organizations like Partners in Health have been shown to be effective.
Credit: Thony Belizaire
Share

CANGE, Haiti and BUTARO, Rwanda --- The theme of this year’s World Mental Health Day—“Depression: A Global Crisis”—may surprise those who consider depression to be a problem only among wealthy countries. As psychiatrists partnering with local mental health providers in rural Haiti and Rwanda, we can tell you this is not the case.

People in poor countries experience untold misery from depression—and receive little, if any, relief. Indeed, the majority of the estimated 350 million people who suffer from depression around the world live in areas with few resources and limited access to mental health care. Yet, as we have witnessed, basic and inexpensive treatment can improve the lives of people who have suffered far too long.

When we first met Emmanuella, a tall, soft-spoken 19- year-old who grew up in rural Haiti, she told us how she felt so sad, she often thought about killing herself by drinking bleach. For three years, she cried or felt like crying most of the time. She hardly ate, even when food was available. She stayed up late “kalkile twòp”— Haitian Creole for “thinking too much” —about the continued rejection from her estranged father with whom she desperately wanted to have a relationship.

Although severe, Emmanuella’s depression wasn’t that different from depression in the United States. Nor were our treatments. We provided empathy, an explanation, and the message that she would get better and that we would be there to treat her. She worked with our team in therapy to develop a safety plan and started an antidepressant. Soon her mood improved, she was doing better in school, and she was no longer suicidal. We didn’t eliminate the poverty, conflict, or stress in her life, but she no longer experienced the depths of sadness and other problems related to depression. Emmanuella stayed in therapy and on medication, and “lap kenbe fèm”—“she is staying strong.”

Half a world away in Rwanda, the reality of living with severe mood disorders is similar. In the rural mountains of Rwanda, Chantal, another marginalized 19-year-old woman, was brought to us in the throes of a manic episode. She had been put in handcuffs. Chantal had bipolar disorder, and like many patients suffering from this condition, she also experienced depression. For years, Chantal had been undone by mania that caused behavioral difficulties that alienated her from her family. They eventually kicked her out of the house.

Together with our mental health team, we started her on a mood stabilizer, kept her in regular treatment and enrolled her in community-based services. Chantal now sells mangoes in the market, and her half-brother has built her a small hut (for which she still needs a roof.) Witnessing the success of her treatment, Chantal’s family has suggested they may ultimately welcome her back into their home and community.

Emmanuella and Chantal’s diseases are all-too familiar: similar mental disorders are present in men and women, young and old, and rich and poor all over the world. Depression is neither a disease of affluence nor simply a consequence of living in poverty. It is a complex illness influenced by biological, genetic, psychological, and social factors. However, our patients offer powerful examples of how treatment can alleviate social difficulties, the risk of illness, and other problems that can perpetuate poverty.

The World Health Organization predicts that by 2030, depression will become the leading cause of disability worldwide. This burden is greatest for poor countries, where 75 percent of patients with severe mental disorders don’t receive the treatment they need. Just one in ten people with depression is treated, despite considerable evidence that generic medications and psychotherapy treatments by non-specialists are effective and cost-effective.

Psychiatrists can play an important role in improving global mental health— not just as physicians — but as advocates, strategists, and teachers. We must find ways to expand access to mental health care through community-based services and primary care. We must train local clinicians, even non-clinicians, to identify and treat patients with mental disorders, and we must work with local governments and community leaders to prioritize mental health care and reduce stigma.

We have seen the tide change in our communities, and we have seen patients get better. Doing this work takes resources, but we also know that investing in lasting change far outweighs the cost of doing nothing.

Dr. David J. Grelotti is clinical and research psychiatrist at Partners In Health and Research Fellow in Psychiatric Epidemiology at the Harvard School of Public Health. In this role, he supports the implementation and delivery of mental health clinical services and research in Haiti and Lesotho. Dr. Stephanie Smith serves as clinical psychiatrist at Partners In Health’s sister organization in Rwanda where she supports the Ministry of Health’s plan to integrate mental health services nationwide.